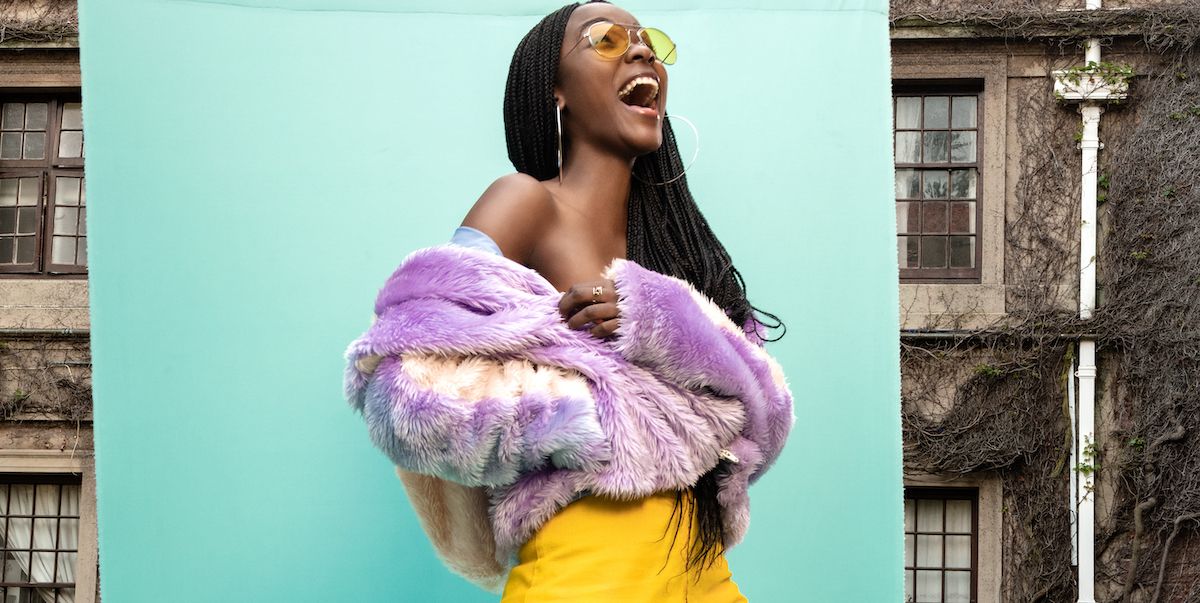 Maybe everything started when Pearl Thusi predicted the future. Earlier this year, Thusi, arguably one of South Africa’s biggest television stars, gathered a group of young women to appear in a Cosmopolitan South Africa photoshoot. She was the magazine’s cover model for the March 2020 Netflix issue, timed to her starring role in the streaming giant’s first-ever African series, espionage drama Queen Sono. But Thusi had one stipulation: She insisted up-and-coming actresses be featured alongside her.

Cosmo agreed. Thusi hand-selected each of “South Africa’s rising screen queens,” watching them dress in frilly tulle gowns and sneakers on the eaves of a sun-baked city rooftop. Her youngest pick was 21-year-old Ama Qamata, bright and energetic in neon pink, grinning as she attempted sultry glimpses toward the camera. At that point, Qamata’s starring role in Netflix’s second African series, the teen drama Blood and Water, was still a few months away from release

“You are going to be the future,” Qamata remembers Thusi telling the girls. “I’m passing the baton over to you.”

No pressure, of course. But, the truth was, even Thusi was a little late to the game. Qamata was ready for this. Her story started years earlier.

“I really liked attention as a kid,” she tells ELLE.com. “I wanted people to look at me. My family just knew from a young age, ‘Yeah, this girl is going to become an entertainer.’” The actress grew up in Johannesburg, where she moved at the age of three from Cala, a small town in the Eastern Cape. She later went west to study at the University of Cape Town, from where she sent a self-taped audition to the casting directors of Blood and Water.

She’d already appeared in a few TV shows, but Qamata knew what it would mean to star in a globally released Netflix production featuring a majority Black cast set in Africa. This was history-making in action. So when an email came a week later requesting her presence at callbacks in Johannesburg, Qamata didn’t deliberate long before booking a flight. In fact, she booked two flights—she flew to Joburg for the callback, met the casting team and did the read, then flew immediately back to Cape Town in time to make class.

After three more callbacks, she got the role: Puleng Khumalo, an intelligent but interior young woman carrying the weight of her family’s tragedy. In Blood and Water, Puleng is a well-behaved teenager who feels uncomfortable at parties and struggles to trust anyone who isn’t her little brother. But she’s forced into reckless decision-making when police pull up outside her school, handcuff her father, and arrest him for human trafficking.

Ama Qamata on the set of Blood & Water.

That’s because 17 years ago, Puleng’s sister, Phumele, was kidnapped from the hospital where she was born. Every year, the Khumalo family celebrates Phumele’s birthday as a sort of tragicomic memorial, with a party and a giant cake whose candles Puleng must blow out on behalf of her sister. But Puleng’s father might not be innocent in the crime that haunts him; the authorities seem to believe he sold his baby girl for profit.

Exhausted by the mourning, Puleng wants her family to move on. But then she meets Fikile (Khosi Ngema), a beautiful, wealthy student from the elite Parkhurst College, who bears a striking resemblance to a police drawing of what teenage Phumele might look like. And, just like that, the possibility of clearing her father’s name suddenly appears.

“[Puleng] really drew me in from the beginning,” Qamata says. “I think she’s such a strong-willed person, and she’s very driven. And I loved the fact that this show is really the first of its kind in Africa. I’ve seen a lot of excitement for that in the States, to see young Black kids be represented in this category.”

The show itself has some hits and misses, focusing more on cyclical spats between the students than on its far more interesting themes of privilege, inequality, and identity. But the bones are there. The Khumalo family is middle-class; Fikile’s family is drowning in wealth. Fikile wants to distinguish herself as self-made, so much that she’s become a social media influencer, an Olympic-level swimmer, and a candidate for Head Girl at Parkhurst. This sets her up for an interesting arc: Will she recognize that even these accomplishments, as admirable as they are, are in part due to her family’s power? The trouble is, she’s also sleeping with the swim coach, a side plot that sets much of the drama in motion.

Puleng herself is often pulled into easily avoidable conflict with her would-be sister, which can, at times, seem a waste of Qamata’s talent. She’s at her most captivating when she’s warring with love and pain and resentment among her family members: sleuthing behind their backs, arguing over bank loans with her mother, and sneaking into the closed-off bedroom to steal pictures of her baby sister. Blood and Water hasn’t quite hit its stride, but its promise is overwhelming. There’s so much this show—and this star—can do.

And Qamata sees it. She talks excitedly about how language appears throughout the episodes, including several of South Africa’s 10 official languages, and the way the script weaves in references to the country’s income inequality, and, of course, Cape Town’s breathtaking scenery. “The world has a certain view of how Africa looks, and I’m sure many people are disappointed to see that, well, African kids don’t go to schools with lions,” Qamata laughs.

So that’s what she wants the show to dissect in season 2. Of course, she desperately wants to know who Puleng ends up with—the smooth, soulful KB (Thabang Molaba) or goofy, loyal Wade (Dillon Windvogel)—but she also hopes the show doesn’t skim over the bigger issues, like the cornerstone behind why this is only Netflix’s second African production: Western bias.

One Blood and Water character in particular, Wendy, makes a point of being the most “woke” student at Parkhurst, much to the annoyance of her fellow students. But Qamata points out she’s rarely wrong. In one episode, Wendy argues with a teacher about why South African students should be learning their own history, not merely American and European history. “In school in Africa, we’re learning about things that are happening over there, while we don’t learn what’s happening here at home,” Qamata says. “I would really like to see more of where Wendy’s coming from.”

But until the scripts for next season arrive, Qamata’s ready to inspire right now. She’s eager to interact with Blood and Water fans, to see how the show exists outside her own country. “In South Africa, it’s not really uncommon for someone with my color complexion to be a Black female lead in a story,” she says. “So I was surprised that it’s an issue globally. But I was like, ‘Wow, I’m glad I get to be part of something like that.’ So that other girls can look at me and know, it’s possible it can happen. It’s a huge honor.”

Qamata has Thusi’s phone number, should she need any advice. But if you watch her for more than a few minutes, you already know: She’s confident with the baton in her hands.

Lauren Puckett
Lauren Puckett is a writer and assistant for Hearst Magazines, where she covers culture and lifestyle.