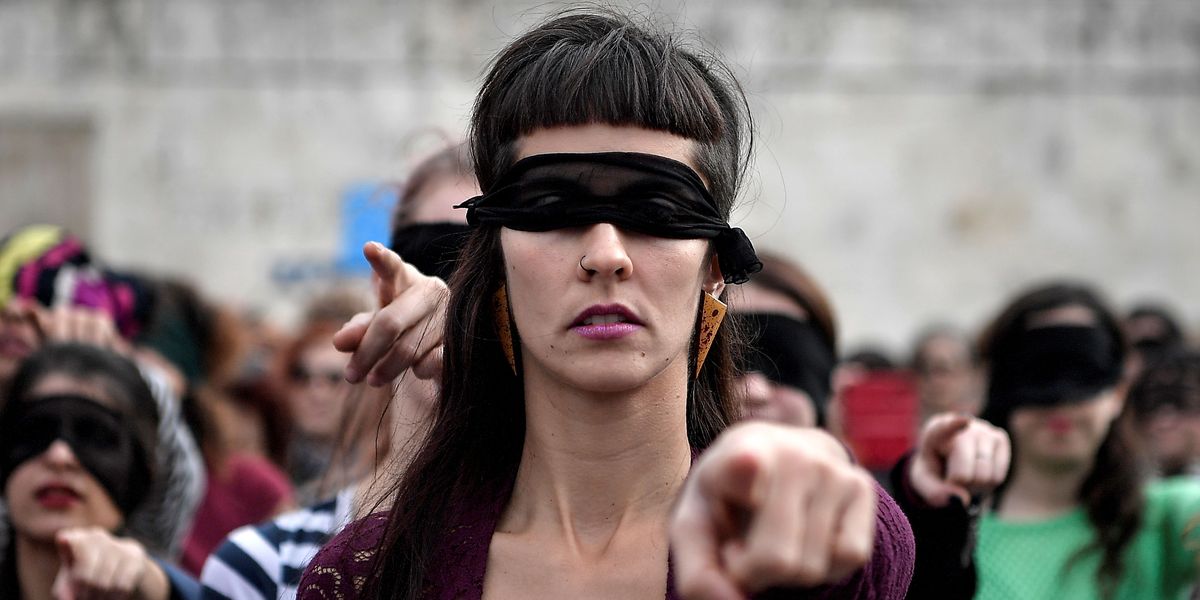 As prospective jurors shuffled into a Manhattan courthouse last month for Harvey Weinstein’s rape trial, 150 women outside erupted in a resounding chorus: “It’s not my fault! Not where I was, not how I dressed! The rapist WAS you! The rapist IS you!”

Some of the activists were older; others in their early 20s. One was a famous movie actress; another bundled her newborn in a Baby Bjorn carrier. Many were sexual assault survivors.

It wasn’t a protest, in the traditional sense, with signs and megaphones. It was a performance piece. The women wore matching black lace blindfolds—a symbol of the often invisible way institutions facilitate gender-based violence—and shuffled from side-to-side in perfect synchronization to the driving beat of a drum. Their shouts ricocheted off the courthouse building: “It’s the cops! It’s the judges! It’s the system! It’s the president!”

“I felt more powerful and less alone. It was euphoric.”

The results were instantaneous: Video of the powerful moment went viral on social media. The women also disrupted Weinstein’s trial proceedings causing “a commotion so loud that it could be heard in a 15th-floor courtroom,” according to the Associated Press.

One participant, human rights attorney and sexual assault survivor Kate Kelly, collapsed to the ground afterward. “It’s hard to described, but I felt this sense of community with everyone,”she told ELLE.com. “I felt more powerful and less alone. It was euphoric.”

Titled “A Rapist in Your Path,” the stirring resistance act is part of a new global movement to address transnational violations of women’s rights. Brought to life last fall in Chile, it has been replicated 367 times in 52 countries, and on every continent except for Antarctica. As demonstrations continue to crop up all over the world, it develops additional layers of meaning specific to location. In Turkey, where Reuters reports 440 women were murdered by men last year, protests center on femicide. In Brazil, women added the lyrics “Marielle is present. Her killer is a friend of our president,” a reference to Rio de Janeiro city council member Marielle Franco, whose 2018 murder became a symbol of resistance to dominant political forces in the country.

In the U.S., the piece is chanted in connection to the #MeToo movement, police brutality, and abortion rights. Activist Rose McGowan told ELLE.com this kind of action for change that incorporates pointed movements and melodious lines is “incredibly powerful.”

“It will continue to spread,” she said. “You know, you can’t stop this, because it’s so intelligent and deep and strong. And it comes from centuries of oppression.”

“Un Violador en Tu Camino” (its original Spanish title) isn’t about one incident, one assault, one perpetrator, or even one issue. Written by Chilean feminist theatre troupe Las Tesis founders Paula Cometa, Sibila Sotomayor, Daffne Valdés, and Lea Cáceres, the song calls out international infrastructures in place that belittle assaults on women, positing that states themselves are often the perpetrators. It criticizes a larger, more methodical use of sexual violence to repress women, incorporating lyrics like: “This oppressive state is a macho rapist.” (Full lyrics in English and Spanish can be found at the end of this piece.)

The Guardian‘s Gaby Hinsliff, who spoke with Cometa, writes that its title “mimics an old slogan portraying the police as ‘the friend in your path.'” (ELLE.com’s calls to Las Tesis were not returned by the time this article was published). Hinsliff also reports that Las Tesis was inspired by Argentinian-born anthropologist Rita Segato’s teachings on how to tackle gender-based violence by dismantling power structures that place men above women.

The song’s accompanying choreography—shuffling, pointing, and three squats—representss what Hinsliff calls “the degrading position arrested women have allegedly been forced to adopt for body cavity searches, often while stripped naked” in many Latin American countries.

Women’s March co-founder Paola Mendoza helped organize the “Un Violador en Tu Camino” performance outside Weinstein’s trial after catching a clip of the Las Tesis “intervención,” as they called it, in front of the Chilean Supreme Court last November. Dozens of women participated in black blindfolds and “pañuelos verdes,” or green scarves, to symbolize the fight for legal abortion.

They stomped. They waved their arms. They chanted about injustices in Chile, where only 8 percent of all rapes end up with a conviction, according to the Chilean Network Against Violence Against Women. It was mesmerizing, Mendoza told ELLE.com.

She forwarded the video to her friends and fellow activists Sarah Sophie Flicker, Nelini Stamp, and Yara Travieso.

Should we bring this to the U.S.? she asked them.

The response was unanimous: Yes.

Women performing “A Rapist in Your Path” during Harvey Weinstein’s sex crimes trial.

With permission from Las Tesis, Mendoza borrowed the group’s moves and translated their song from Spanish to English. The only thing she altered was the clothing. In Chile, demonstrators wore “club attire” to emphasize the right to dress without fear of attack, Mendoza said, but she envisioned protesters outside Weinstein’s trial in all-black with red hats as a tribute to the Chilean flag.

She organized three rehearsals in a financial district office building ahead of January 10, the day they gathered, first at the courthouse, and then in front of Trump Tower. Their plan remained under wraps until that morning, when the women met in front of the court building. When it was over, they gathered for a group hug. Many of them wept.

“As you say these words, and I’ve said them so many times now, they never lose their power and the power they hold only gets deeper and more profound,” Mendoza said. “The words are definitely filled with anger, but also with a tremendous amount of empowerment. It’s about taking back and reclaiming our space and our bodies. It’s a liberation, of sorts.”

“Un Violador en Tu Camino” has been replicated 367 times in 52 countries, and on every continent except for Antarctica.

Mendoza isn’t the only one spreading “Un Violador en Tu Camino.” Hundreds of other feminist leaders have organized interventions all over the world. Amateur Uruguayan cartographer Isaura Fabra has taken it upon herself to track every single one. In coordination with Geochicas, Fabra created an interactive map to showcase its global influence. So far, she’s discovered 367 performances in cities like London, Beirut, Barcelona, Tel Aviv, New Delhi, Mexico City, Lima, Tokyo, and Istanbul. In the U.S., it’s spread to 11 cities, including live performances outside Seattle’s Space Needle, at the University of Texas in Austin, and in Chicago’s Millennium Park.

Fabra told ELLE.com the anthem’s power lies in its universality, which has propelled a global momentum.

“Rape is an issue that has united women all over the world,” she wrote via email from Uruguay. “What this map tells us is that solidarity has spread like sand… It’s a map of hope and when you look at it, you see your allies.”

That imprisons us at birth

Is the violence you DON’T see.

That imprisons us at birth

Is the violence you CAN see.

And the rapist WAS you

And the rapist IS you

REPEAT FROM THE TOP

Lil Nas X Crashes Wedding Reception at Disney World
Burning Man’s Lawsuit Against The U.S. Federal Government Officially Underway
Robert Pattinson’s Batsuit Is Inspired By Arkham: What This Means For The Batman
Grey’s Anatomy Round Table: Do YOU Believe DeLuca Is Battling a Mental Disorder?
Dustin Diamond Says Screech Should be in ‘Saved by the Bell’ Reboot