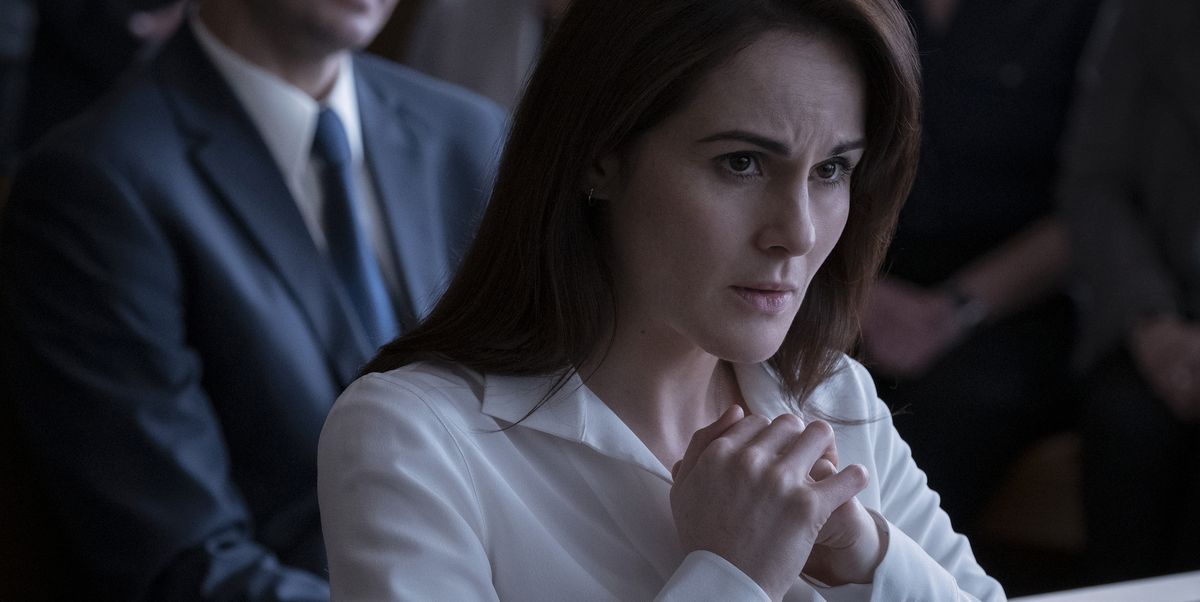 Spoilers for the Defending Jacob finale, “After,” below.

No one reinvents themself for the screen like Michelle Dockery. At the close of Downton Abbey, it seemed we’d never see her as anything but English nobility. Then came Good Trouble, and it was if she’d only ever been a North Carolina grifter. Godless followed suit, with her flawless performance as a steely widow circa 1884.

In Apple TV+’s Defending Jacob, adapted from William Landay’s 2012 novel, Dockery’s Laurie would seem, by her exterior, to be an easy lift for a veteran actress. She works tirelessly for a non-profit, has a wonderful marriage to Andy (Chris Evans), and is a devoted mother to her teenage son Jacob (Jaeden Martell). But when her Jacob is arrested for the murder of a classmate, we see a woman suffering under the weight of an unbearable experience. A once-idyllic marriage shows strain as the couple differs in response to the question of their son’s guilt and the criminal past of Andy’s long-estranged father surfaces. While Andy remains steadfast in his belief that Jacob was wrongly accused, Laurie is plagued by seemingly innocent moments of aggression in Jacob’s childhood.

In the final episode, the buoyant relief Laurie experiences after Jacob’s acquittal lasts only until she learns that Andy’s father tampered with the case. The question of Jacob’s guilt will always remain, and while things ostensibly return to normal, Laurie’s relationship with her son, and by extension her husband, has crumbled. On a routine drive to get a haircut, her car slams into a wall, critically injuring Jacob and ending the show with a different question of guilt.

Dockery talks to ELLE.com about those intense final moments, her catalogue of characters, and preparing to watch Normal People in quarantine.

What went into the decision to depart from the book’s ending?

When I came on board, I wasn’t aware of the ending of the scripts. I knew the book, so I feel the reason to do that was to leave the ending with some ambiguity. It leaves it in the hands of the audience to decide what they think really happened, whether it was an intentional thing that she did or heat-of-the-moment distress. Which of course makes for a more interesting, not neatly wrapped-up ending. That was a very delicate thing to play out and we anticipating it as it came up. We carefully played all of that and took some time.

The show approaches the differences between how Laurie and Andy deal with the situation in such a subtle way.

What was important in the storytelling was seeing this very strong unit of family, and then you see it get pulled at as it goes along. We wanted it to be clear that there was a breakdown of communication as they become more distant from each other. Andy’s on his own mission to find out who did this and Laurie is going into the past to rule out this murder gene. Also, it deals with the kind of fundamental emotions of a family—a heightened anxiety as a parent and the guilt carried with having children. That is part of Laurie’s story—that she’s questioning what she may have done wrong or how she could have prevented this if he is in fact guilty.

In the way TV has depicted families in the past, you might assume the mother would be the one less questioning of her child’s guilt. I like that the show didn’t take that approach.

That is an interesting observation. It’s something I certainly didn’t think of, but perhaps it’s because we are coming into a time now where it’s just really about the character being portrayed.

How were you approached about the role? What was the appeal you saw in it?

I think I read four or five scripts and then I met [creator] Mark Bomback and Morten and we had a Skype call. I loved the scripts. It always starts with the right writing. When you pick up that first page and suddenly you realize you’re 20 pages in and you haven’t taken a breath, I know we’re on to a good thing. Sometimes it’s a number of things that draw you to a project. It often starts with the character. Sometimes it’s about the people you’re working with. I was a real fan of Morten’s work. I think he’s a really gifted director.

One of my favorite shows is Good Behavior and I also love Downton. They’re very different shows—do you see a thread in some of the characters you’ve played?

They’re all very different. What I loved about Laurie is that she was very different from the most recent characters I played. You can pick some similarities between Letty [in Good Behavior] and Alice in Godless. There was a steely strength about the two and what they’ve been through in their past. I went from Letty to Alice, and I felt I took a bit of Letty with me—a bit of her chutzpah, her gusto. Whereas with Laurie, it was quite different. I had recently done this role in a Guy Ritchie film, The Gentleman, which is very different and a much lighter character.

I’m sure there is a thread. I’m not sure I can see it. Maybe if I watched them all back to back, I would go, “Huh, there’s definitely some similarities here.” But I feel very fortunate that I played such different roles. That’s not strategic. It’s down to the material in the end and when I feel something in my gut.

With us all staying at home, is there anything great you’re reading or watching?

I’m finding the time to read and watch more than I normally would. I’ve revisited The Sopranos, which is one of my favorite shows of all time, [but] I haven’t seen it in years. I’m very late to the Ozark train and I’m floored by Laura Linney and Jason Bateman. I’ve read Normal People—I’m about to watch the series because I wanted to read the book first.

Hamilton Ending: What Eliza Does And Why She Does It
90 Day Fiancé: Happily Ever After? Colt’s Ladies’ Out of His League
Kim Kardashian West Demands Justice For Man Killed By Sacramento Cops
JoAnna Garcia Swisher Knows Exactly What Maddie Needs in Sweet Magnolias Season 2
Aloe Blacc Likes Black National Anthem But Says NFL Needs Real Change