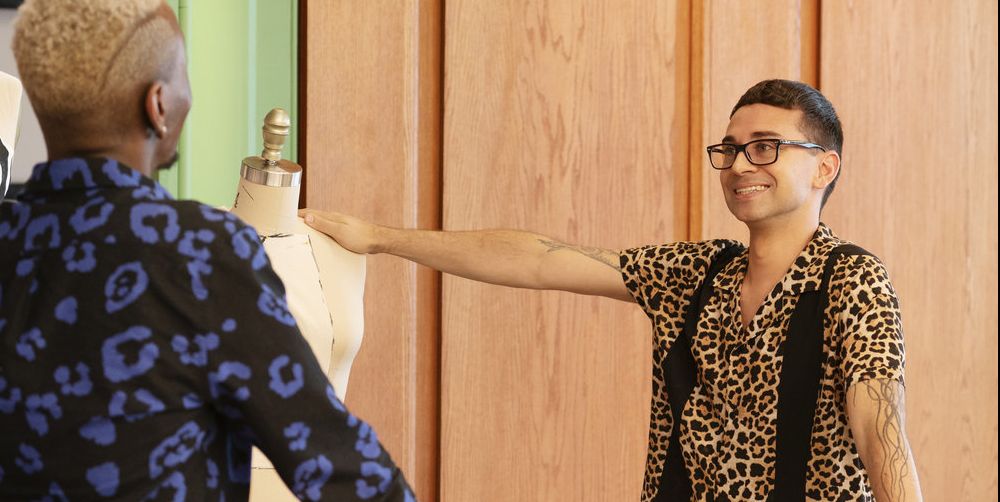 It is truly deranged that the secret society that runs Hollywood continues its relentless attempt to fool me into thinking there is a movie called Cats that exists in reality and will be in theaters at some point in this timeline. This public misinformation campaign has been going on for months and must have cost millions of dollars and for what? I refuse to believe that Cats is a film starring Jennifer Hudson, Dame Judi Dench, and Taylor Swift being visually persecuted by digital fur technology whilst pretending to be felines who are competing to die. Sorry! You got the wrong mark, Hollywood. Fool me once, shame on somebody else!

I thought I had made my position on this matter clear so it was quite a shock to find that the Cats cabal has somehow infiltrated Project Runway. We are not safe anywhere! At the beginning of the second episode, the designers encountered a gigantic doorway in the workroom, through which stepped the equally tall Karlie Kloss who, reliably, made a joke about the door’s height and her own. At this point, I had no idea where this was going and I really miss that innocence. Karlie revealed that the door was a prop from the movie Cats and I actually shrieked aloud in my own normal-sized home. As the program cut to a short infomercial for the pretend film, I started spiraling thinking about the implications of Karlie Kloss, host of Project Runway and former (current????) Taylor Swift squad member (and possibly the subject of many hidden meanings in Taylor Swift lyrics) being at the center of this situation. I got light-headed thinking about the moment she came into work that day and found out that the magic of corporate synergy had brought her face-to-face with Taylor Swift’s new film. There is enough unpacked drama in this setup to fuel a whole album. How did she feel about this? How did Taylor feel about this? And, most importantly, how am I supposed to feel about this? Two minutes in and I’m already desserts spelled backwards.

Pictured above: me explaining the Karlie Kloss-Taylor Swift friendship history and the NBC-Comcast-Universal corporate structure to myself after fully dissociating.

What’s wildest about this whole thing is that none of this has anything to do with the episode! It is deeply consequential to me and utterly irrelevant to the events that occurred on screen in the background while I ran around my house scribbling the lyrics to “Beautiful Dreams” on my conspiracy boards. In fact, despite what the show continues to pretend, even the movie Cats is totally unrelated to the episode. They claim that the challenge—to create a chic street style look that is a fresh take on animal prints—is inspired by the film, but, I’m sorry, nobody looks at a singing house cat with a human face and thinks “Animal prints.” I mean, yes, a leopard is technically a kind of cat, but nobody is out here wearing a Garfield-print poncho. When will the misinformation end?

All I know for sure is that the second episode of this season’s Project Runway found every available opportunity to use a cat pun, added much fuel to the debate about what the terms “animal print,” “street style,” and “Taylor Swift’s friend” mean, and did not convince me that Cats will be in theaters near you (but not me) next week. As always, here’s some superlatives. Oh, wait! I’m sorry; I’ve just been informed by my lawyers that I must call them su-purrr-latives.

During the fitting, Victoria’s model, Christina tried to help Christian make sense of Victoria’s Edward Scissorhands chic white and snakeskin bandage dress by saying “I’m either the stewardess for AirWakanda or I’m getting married in Wakanda.” I need a recap written by Christina the model immediately.

After a bruising critique of his plans for a leopard print caftan (which eventually became a bottom-two-dwelling poncho with a hood), Geoffrey said “I feel like I’m in the litter box.” Can we not, actually?

Marquise, the eventual winner, who informed us that as a self-taught designer he went to YouTube University. As someone who has spent years in YouTube U’s musical theater performance program (which consists entirely of watching Tony Award clips and bootleg videos of different “She Used to Be Mine” performances), I am grateful for Marquise’s representation.

Delightful eccentric Victoria was making small talk about her home country of Moldova with Christian. Christian said he’d like to go to Moldova. Victoria’s response: “the roads are very bad.”

Honey, I don’t know what was going on with Sergio’s design, a leopard print high-necked dress with a ruffle hem and a huge skirt. It was like the Sexy Halloween Costume version of a Disney villain. Christian had a few questions about whether it was street style but Sergio, as usual, was not interested in that much critique. He told Christian that he usually designs for 45-to-60-year-old women as a way of explaining the dowager countess of it all. He then went on the proclaim “Young people can’t afford expensive things so why design for them?” Hmm.

Dayoung receives a visit from Nancy and Alan.

Most delightful thing I have ever seen

Victoria, for reasons that are never quite clear, was deeply committed to pairing her dress with a huge, triangular yellow bag. Delvin, whose lab coat made his comments seem like diagnoses, compared it to a hunk of cheese and told her that he just didn’t see it, unless the dress’ accessories matched the bag. Victoria seemed completely unfazed by this and offered a diagnosis of her own: “You don’t, maybe, understand fashion. Maybe?” she said, effortlessly singeing his pristine white coat.

The judges really weren’t feeling Tyler’s origami-inspired leopard parachute pants which veered into a costume-y territory. Or, per Elaine, like something the Spice Girls would wear. This is precise and devastating and, on top of last week’s read in which she compared a design to early Destiny’s Child, has me desperately in need of an Elaine-curated playlist.

Most just trying to do their job

Dayoung suffered some stress-related exhaustion so severe that the paramedics had to be called to the designers’ penthouse. The camera hovered over the responders’ shoulders as they tended to a listless Dayoung in her bed until one of them pointedly said “let’s leave the patient some privacy” and the filming stopped. I imagine paramedics encounter reality TV film crews at most of their calls nowadays so this is probably old hat for them.

Dayoung receives a visit from Nancy and Alan.

Veronica, who was eventually sent home (too early, in my opinion), was feeling insecure about the unlined underside of the black leather bolero she paired with silk chiffon bloomers. But, without fabric to line it she didn’t really have a choice. “Hopefully no one wants to discuss it,” she said with a shrug. This is exactly the energy I have every time I go into therapy wanting to complain about a problem (that I caused) and hoping that my therapist will conveniently forget to address the cause of the problem (which is me).

Most doing the most

After getting out of the hospital, Dayoung only had one day to do Mood-shopping, design, fitting, and construction. For someone who was experiencing stress-related exhaustion this was probably not quite what the doctor ordered, but she pulled it off and survived the week! I am obsessed with her!

Most doing the least

Delvin finished his gorgeous parrot-print gazar coat dress on the first day of the two-day challenge and so he spent the second day leaning on various surfaces, avoiding Christian, and, oddly, not helping Dayoung to finish her design even as other designers pitched in.

YouTube U’s own Marquise, who constructed a high-collard blouse out of three different animal prints and paired it with a khaki skort for an urban safari look that you can buy on 19th Amendment right now and wear to the next showing of the fictional movie Cats!