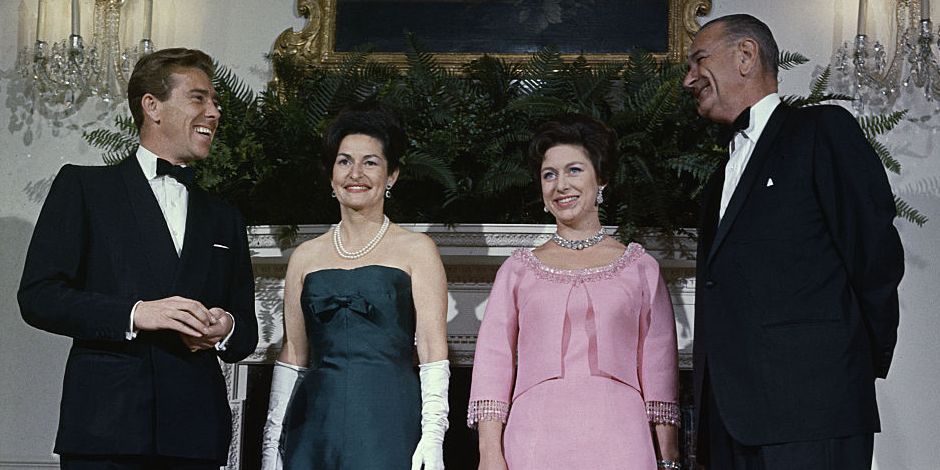 Princess Margaret is heading to the United States in the third season of The Crown. Episode 2 of the new season takes place in 1965, as Princess Margaret (played by Helena Bonham Carter) and her husband Lord Snowdon (played by Ben Daniels) embark on a tour around the United States after receiving an invitation from Sharman Douglas, the daughter of a former U.S. ambassador to Britain.

According to The Crown, Margaret’s tour was also of upmost political importance; the Queen asks Margaret to attend a dinner at the White House and convince President Lyndon B. Johnson to help with a financial bailout. Margaret is ultimately successful and receives rave reviews about her time spent across the pond.

But is that truly how it all went down? ELLE.com spoke with Christopher Warwick, who wrote the authorized biography Princess Margaret: A Life of Contrasts, to find out what really happened during that visit.

The tour was criticized for being too expensive.

“When Princess Margaret and Tony Snowden went in 1965, that was their first visit, and it attracted a huge amount of interest here [in the U.K.] and obviously in America,” Warwick said, explaining that at that time, it was a big deal to travel to the States because of how expensive the journey was. “Some MPs here criticized it, thinking that it was more a jolly holiday for Margaret and Tony, but they did in fact undertake official engagements.”

Warwick confirmed that the royals did attend a dinner and a ball at the White House, though he doesn’t believe Margaret was there to influence any policy. At the time, the Johnsons did not have a particular rapport or friendship with the royal family.

Princess Margaret and Lord Snowdon in Pasadena, California in November 1965.

While the trip did garner positive coverage in the United Kingdom and the United States, there were concerns in some U.K. papers about the extravagant cost of the trip, with one headline reading “Who pays?”

“She was 35 when she made that first visit to the States,” Warwick said of the tour. “She was royal, she was glamorous. They were really the first royal couple to make a tour because they were in California, Los Angeles, New York, Washington. She was touring Arizona, where they spent a private weekend, but it was a reasonably wide-ranging visit.”

Margaret’s time at the White House was uneventful.

Though Princess Margaret is seen successfully convincing President Johnson to help with a bailout in The Crown, in real life, the visit was largely unexciting. Princess Margaret gave a short toast and there was dinner and dancing. In the end, it was a pretty standard affair.

President Johnson dancing with Princess Margaret at a state dinner at the White House in November 1965.

Her relationship with her husband was faltering.

Throughout the episode, it’s clear that Princess Margaret and Lord Snowdon’s relationship is in trouble, with the two occasionally bickering about Margaret’s love for the spotlight. As Warwick explains, by 1965, there were already cracks in the their relationship. “This was largely because they were alike as characters and personalities,” he says. “They started to rub one another the wrong way, and she had become rather possessive. She wanted to go on assignments with him, which he didn’t want, and he got rather fed up with being her consort. He didn’t want to be Mr. Princess Margaret.” The couple officially announced their divorced in 1978.