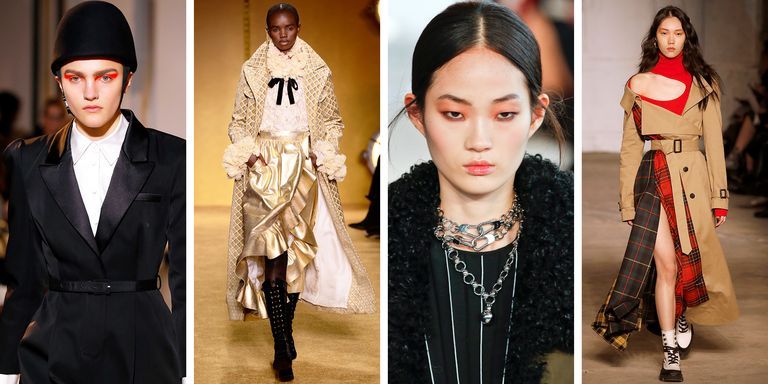 Chanel, Louis Vuitton, Gucci, and more of the fashion industry’s heavy hitters are finally convincing us that horse girls matter. Apparently, so do snoods. Read on to see the most influential trends from the fall 2020 runways.

The tasseled trim was given an elevated touch on the runway this season. Instead of being made for the boho crowd, we’re seeing chic office skirts at Christian Dior, evening coats at Bottega Veneta, and more designers cutting their clothes with long carwash fringe.

You snood, you don’t lose this season. The head covering was everywhere for fall. Paco Rabanne sent chainmail snoods worthy of medieval times, while Michael Kors went more practical with knitted hoods you’ll be thankful for come winter. Some designers were a tad more impractical: Loewe and Gucci’s opted for feathered styles and Richard Quinn went hardcore with a studded mask.

When it comes to equine-inspired fashion, we’re seeing less western, more Westchester. Designers like Tory Burch and Brandon Maxwell traded in cowboy stirrups for sleek riding boots and styled them with ladylike suits. And since horse girls are nothing if not dedicated, we even saw actual equestrian caps topping off looks at Self Portrait and Chanel.

Instead of desperately buying yet another pair of basic black gloves from CVS, it’s finally time to invest in a style you’ll keep for ages. Practice what Saint Laurent, Valentino, and Miu Miu preached on the runway with bright statement accessories—a welcome continuation of spring 2020’s colorful leather trend.

For several seasons now the ‘90s has been the decade to dip into. But instead of mom jeans, designers have gone all in on the grunge movement as set by Marc Jacobs in his iconic 1992 collection for Perry Ellis. Usual suspects like R13 styled Courtney Love slip dresses with Doc-inspired boots. But unexpected designers also tapped into the Angela Chase mindset: At Monse, safety pins secured tartan plaid skirts and dangled from fishnet tights; Louis Vuitton sent thrift-store-inspired petticoats down the runway; Valentino outfitted models in thick-soled lug boots and Burberry’s plaids mingled among varsity stripes.

The shearling jacket has been going strong for years, but this fall it’s all grown up and out with a shaggy texture that is doing the most. The long-haired coat dominated the runway at Burberry, Stella McCartney, and Celine meaning it’s time to make room in your winter wardrobe for a thick, fuzzy friend.

Is there anything sexier than a slinky dress? The answer is a resounding no. Bottega Veneta, Tom Ford, and the rest of the industry’s leading designers all created nearly identical silhouettes riffing on the same column dress. The maxi was mostly favored with several appearances of a long-sleeved turtleneck iteration, but designers like Jacquemus and Loewe opted for sporty knitwear.

The cutout as we know it was elevated for grown women this fall. Instead of the tacky, 2000s styles we’re used to, delicate slits, undulating hip holes, and contemporary cutouts were revealed as the new way to wear the not-so-barely-there look. This sexy trend—as seen at Prabal Gurung—lends itself easily to a night out. But pieces with more subtle openings—like at the elbow (as seen at Victoria Beckham) make it work for the office.

What the tailored shorts suit is for spring, the skirted version is for fall. These matching sets are surprisingly versatile with styles ranging well beyond Clueless minis. Miu Miu’s wools are business appropriate while Jacquemus’ micro combo is perfect for your next balmy getaway.

Basic camel coat? We don’t know her. Think wider next season, because ponchos and capes, made in every way from formal to casual, will be the most noteworthy silhouette. Opt for modern elegance with black tie-ready gown versions from Balmain and Valentino, or go casual in theknitted covers from Sacai.

Bottega Veneta’s influence knows no bounds, and we’re seeing it sprinkled throughout the runways. Oversized chains in particular are dominating the entire accessory spectrum; Whether you’re into gold or silver, you can find thick shackles flung across bags, jewelry, and belts. Ulla Johnson strapped her sandals in gilded ropes, giving the trend a goddess twist.

Maybe we’re all a little obsessed with Little Women, because we spotted sweet, Victorian-inspired toppers at Ulla Johnson, Jason Wu, and of course, Chanel, the OG master of tweed toppers. The silhouette has subtly puffed shoulders, a nipped waist, and single button front. It’s cut in fabrics ranging from velvet to dainty floral brocade, meaning there’s something for everyone.

Time to start practicing your victory rolls, because the ’40s are back. The decade doesn’t get enough sartorial love (we, too, are still harboring an obsession for the ’70s), but let Rodarte and Miu Miu convince you to take on the era. Think feminine shirt dresses, smart collars, and shoulder poofs. If you’re searching for a more entry-level look, try a Rosie the Riveter head wrap, as seen at Marc Jacobs.

This might be the most divisive trend of the season since for some, bubble hems evoke middle school dance garb. But leave it to Oscar de la Renta and Simone Rocha to usher in a new twist on the bulbous silhouette. For fall, designers puffed up sleeves and hemlines into rotund shapes that are a far cry from our the embarrassing style choices of our adolescence.

Swap out your waistcoats for sweater vests next season, because this piece is bound to a major player for fall. Prada and Christian Dior took the preppy staple for a high fashion spin, but we suggest you start scouring your dad’s closet now to get the style asap.