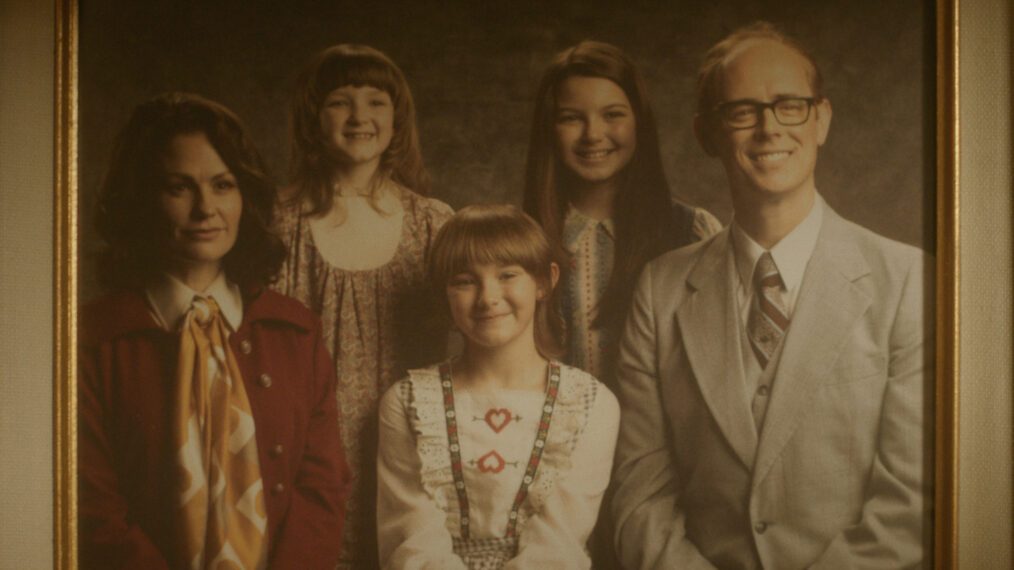 Peacock‘s new series A Friend of the Family (premiering October 6 with four episodes) dramatizes the true tale of the evil Robert “B” Berchtold (Jake Lacy) kidnapping (twice, between 1972 and 1976), sexually abusing, and eventually marrying the young Jan Broberg right under her parents’ noses.

Mary Ann and Bob Broberg knew Berchtold had taken Jan the first time, but to their horror, it happened again a few years later. The mind-boggling story was told in Netflix‘s documentary Abducted in Plain Sight, prompting viewers to express their bewilderment all over social media. With its title alone, A Friend of the Family aims to explain just how the Brobergs could have “let” this happen repeatedly — and to serve as a warning.

Berchtold was their close family friend, and with the help of FBI recordings of the criminal, his own audio journals, and firsthand knowledge from Jan and her mother (both producers on the series), the unsettling drama paints the picture of how a narcissistic abuser successfully manipulated this unwitting family and his own.

Lacy tells TV Insider there is no humanizing this character. “A lot of the time, I would agree that my job is to offer humanity to a story, or at least to approach it without judgment,” he explains. “But that’s a difficult task when you’re playing a person objectively devoid of the things that I hold close as a human, like compassion and empathy and generosity. When each of those things is weaponized to get what you want, that’s a very different person.”

Despite The White Lotus showing his knack for playing the bad guy, Lacy says there was some struggle figuring out how to play Berchtold. (We’d be concerned if there wasn’t, truly.)

“There’s one memorable experience shooting where Mary Ann [Anna Paquin] has come to my motor home, and I hit her with about six different tactics to try to keep her in my orbit. It felt really not good,” he says with a laugh. “Doing the scene, I thought like, ‘Is this reading? This seems inorganic and not connected to anything.’”

He continues, “Nick [Antosca], who’s our wonderful writer and producer, and Rachel [Goldberg], who is directing, were like, ‘Well, you are looking for the humanity to connect these moments, but this is a person who’s devoid of that. It probably will feel unnatural to you, because you’re not a psychopath.’ This person is shamelessly willing to pivot from seduction to compassion to victimhood to aggression — whatever means necessary to get someone back under their control. The attempt to bring humanity was superseded by the need to be honest with this story.”

Colin Hanks plays Bob Broberg, Jan’s father. He didn’t see Abducted in Plain Sight before booking the role, but having worked on this story, he now understands it wasn’t the Brobergs’ ignorance that put their daughter in danger, but rather Berchtold being a truly insidious man. (Jan herself agrees. She delivers a PSA detailing as much at the top of the series premiere.)

For Hanks, A Friend of the Family afforded “a good chance to really try and answer” the questions on peoples’ minds, “to show the reasoning behind the decisions they made, because they didn’t make them in a vacuum. They were manipulated and preyed upon.” Hanks, Lacy, and Mckenna Grace agree that playing real people does half the work of character development, but Antosca’s script made it even easier, though they feared appearing unbelievable at times.

Part of Berchtold’s scheme was to convince Jan that aliens had abducted the two of them and tasked them with saving the human race. He pretended to be the aliens in recordings played in the motor home to bolster the narrative and terrify Jan into compliance.

“This story is already so grand, so large, and the purpose behind telling it is something you can really get behind that there’s no need to go, ‘I wish we could embellish this thing,’ you know?” Lacy says of his chilling character. “If anything, it feels more grounded because you don’t go like, ‘Well that seems a little made up.’ As wild as it is, it is what happened.”

Lio Tipton plays Berchtold’s wife, Gail, whose involvement in her husband’s schemes aren’t as documented in real life, leaving them to fill in some narrative gaps with the help of the script.

“Similar to Jake, finding empathy or trying to be OK with the idea that Gail knew what was happening, I couldn’t do,” they say. “And so everything came through this filter that I put up of protecting her family. In her eyes, it wouldn’t be manipulation or denial. It was honest, heartfelt protection.”

The depiction of the Brobergs was given the blessing of the real-life counterparts. Grace plays the older Jan, with Hendrix Yancey playing the Young Jan. (After years of playing the young version of characters like Captain Marvel, Sabrina Spellman, and more, someone’s playing a younger Grace for a change.)

“I wanted to make sure that I told Jan’s story right,” she says. “It was amazing to have her permission to do that and to have her constantly in touch and to be able to have her stories and know what was going through her brain at that moment.”

Now years removed from the traumatizing experience, Broberg tells TV Insider her perspective on how it was allowed to happen.

“I have had the opportunity to study how groomers, master manipulators, psychopaths, and sociopaths actually work,” she explains. “My story may have some crazy twists and turns, but the most common form of child abuse — sexual child abuse, especially — is never talked about. It’s by someone that you know, love, probably trust, and your adults are also in the same boat. It doesn’t live singularly and rest on just the child. It’s really true grooming throughout the entire circle in order to have access to the child.”

“In this series, all of that is deeply ingrained in the storytelling because the cast, the crew, Nick, all of the team really wanted to tell the story in that truthful way so that others could relate and understand how this happened to us,” she continues. “It was a slow burn. He was the most charismatic, charming, make the women swoon, make the men want to be him guy in our community. He was one of those rock stars nobody would’ve expected, a pillar of the community. That’s exactly how predators hide.”

Despite the critique of them falling prey to Berchtold twice, series creator Antosca praises the Brobergs. “The same values that this man exploited in order to manipulate them are the values that ultimately allowed them to heal and forgive and escape his influence.”

Berchtold avoided prison for 30 years after the events of A Friend of the Family. Mary Ann eventually detailed the ordeal in detail in her book Stolen Innocence: The Jan Broberg Story, which prompted Berchtold to try and insert himself back into Jan’s life, eventually getting arrested at one of her public speaking engagements in 2004. Jan was granted a restraining order against Berchtold for the rest of his life following the arrest. He died by suicide in 2005 after consuming a large quantity of heart medication and alcohol.