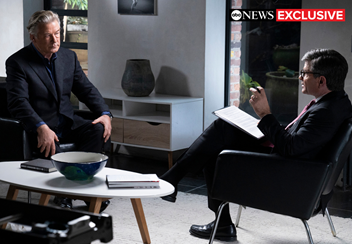 UPDATED,  with additional comments: Alec Baldwin said in an interview with ABC News’ George Stephanopoulos that he doesn’t worry that he will be criminally charged in the shooting that killed cinematographer Halnya Hutchins on the set of the movie Rust.

“I have been told by people who are in the know, in terms of even inside the state, that it’s highly unlikely that I would be charged with anything criminally,” he said.

Asked by @GStephanopoulos if he worries about being criminally charged, Alec Baldwin says: “I don’t. I’ve been told by people who are in the know…that it’s highly unlikely that I would be charged with anything criminally.”

Santa Fe District Attorney Mary Carmack-Altwies has not ruled out criminal charges as the investigation continues.

Baldwin sat down with Stephanopoulos for an ABC News one-hour special, Alec Baldwin Unscripted, his first extensive interview since the Oct. 21 fatal incident on the set of Rust at a location near Santa Fe, NM. Cinematographer Halyna Hutchins was killed and director Joel Souza was injured when the antique Colt .45 revolver that Baldwin was using during a dress rehearsal discharged.

Baldwin said that Hutchins had been guiding him during the rehearsal on the set on Oct. 21, as she was “marking” scene for shooting angles.

He said that he advised Hutchins, “Now, in this scene, I am going to cock the gun.”

“So I take the gun and I start to cock the gun. I’m not going to pull the trigger. I said, ‘Did you see that?’ [She said] ‘Well, just cheat it down and tilt it down a little bit like that.’” Baldwin said that the gun “ended up being aimed right below her armpit.”

In the immediate aftermath, Baldwin said that it was not immediately clear what had happened.

Everyone is horrified. They’re shocked. It’s loud,” he said. “They don’t have their earplugs in. The gun was supposed to be empty. I was told I was handed an empty gun, if there were cosmetic rounds, nothing with a charge at all.”

Baldwin said that after Hutchins was struck by the bullet, “I thought to myself, ‘Did she faint?’ The notion that there was a live round in that gun did not dawn on me for probably 45 minutes to an hour later.” He thought that Hutchins perhaps may have been struck by wadding that comes out of a blank cartridge.

“No one could understand. Did she have a heart attack? The idea that someone put a live bullet in the gun was not even in reality,” Baldwin said.

Souza was standing behind Hutchins and also had been struck.

He said that he stood over her for about 60 seconds “and she just laid there kind of in shock.” He said that she was still conscious. The set was then cleared and medics were brought in, he said.

Baldwin said that he has no idea how live ammunition got in the gun or even on the set.

“Someone put a live bullet in a gun, a bullet that wasn’t even supposed to be on the property,” he said. “Someone is ​responsible for what happened, and I can’t say who that is, but I know it’s not me.”

Stephanopoulos asked him whether he didn’t check the gun himself.

“What I was taught years ago by someone was, if I took a gun, and I popped a clip out of a gun or manipulated the chamber, they would take the gun away from me and redo it,” Baldwin said. “The prop master said, ‘Don’t do that.’ When I was young. One thing that they said was ‘We don’t want to be the actor to be the last line of defense against a catastrophic breach safety with the gun.”

.@GStephanopoulos presses Alec Baldwin on fatal ‘Rust’ accident: “Why did you choose, in your 40 years [in the industry], not to check the gun yourself?” https://t.co/zYugqKhIVW #BaldwinABC pic.twitter.com/Y9eTITwliE

ABC News released a trailer of the special on Wednesday in which Baldwin said that he “didn’t pull the trigger” of the gun, a clip that was certainly tantalizing to draw in viewers, but a bit of an odd tease for a tragic incident with the investigation ongoing. On Thursday, an attorney for “Rust” assistant director David Halls said that her client backed up Baldwin’s claim that he didn’t pull the trigger.

Baldwin said that he was “handed a gun and someone declares, ‘This is a cold gun.’” Stephanopoulos asked if that was Dave Halls, the first assistant director, and Baldwin responded that it was.

When he’s saying, ‘This is a cold gun, what he’s saying to everybody on the set is, ‘You can relax because it’s empty.’ … A cold gun means there is no charge in there. There could be dummy rounds.”

Baldwin said that he had “no idea” as to “what happened there, and why he made that statement, and what the realities were.”

According to ABC News, Halls’ attorney Lisa Torraco said that checking the gun was not her client’s responsibility. She did not confirm that it was Halls who handed Baldwin the weapon.

Baldwin said that he decided to sit down for the interview in part to counter some of the statements that have been by others about what happened on the set.

Two civil lawsuit have been filed against the production, including one by the script supervisor, Mamie Mitchell, and another by chief lighting technician Serge Svetnoy. Both lawsuits have named Baldwin, who also was a producer on the movie. More litigation is expected.

In the interview, Baldwin made a distinction between the type of producer that he was and that of a more active line producer. But he also said that he was not aware of crew concerns about safety on the set.

“I never heard one word about that. None,” he said.

Earlier on Oct. 21, Lane Luper, the first camera assistant on the film, walked off the set with six other crew members in protest of poor working conditions. Baldwin said that he spoke to Luper the day before, and while he talked of the need for better hotel rooms closer to the location, he “didn’t raise safety issues.” Baldwin said that he would have been willing to give up some of his salary to pay for the improved accommodations. He instead suggested that the crew members who walked out “decided to renegotiate the contract in the middle of filming.”

Baldwin also distanced himself from the decision to hire Hannah Gutierrez Reed as the film’s armorer, responsible for handling the weapons. He said that he was told by her that after using a gun for a scene or rehearsal, “you give the gun to me or Halls.” He said that he had an hour and a half safety demonstration with her on Oct. 12.

While Gutierrez Reed’s attorney has raised the possibility that someone may have tried to sabotage the set by placing a live round in a box of dummy rounds, Baldwin seemed to reject that possibility.