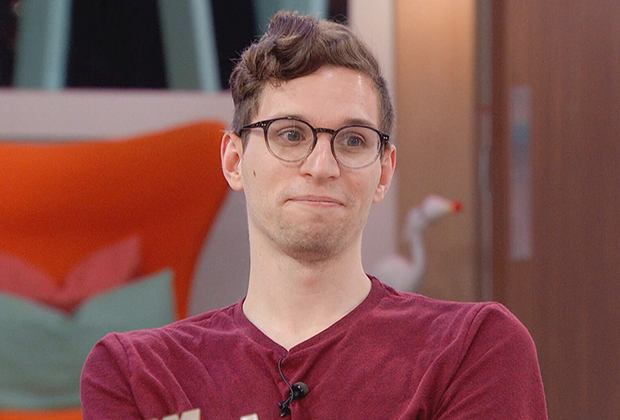 Between the Eviction Night blindsides, Kyle’s dramatic downfall and the mystery of who stole Jasmine’s muffin, Big Brother 24 has been plenty chaotic already — but there’s nothing quite like the chaos of a live double eviction episode, which the show delivered on Thursday night.

We already got a double eviction of sorts two weeks ago, when Dyre Fest and Brochella each sent a houseguest to jury. But Thursday’s two-hour installment was more like the classic double evictions to which we’re accustomed, in which a full week of Big Brother is played in one night. It was an eventful evening, so let’s get right down to it:

THE JURY HOUSE | Before any evictions go down, we catch up with recent events at the jury house, which are light-hearted and breezy when Joseph and Jasmine join Indy, then turn quite dramatic when Kyle arrives. As the jurors watch last week’s Head of Household competition unfold, Joseph can’t understand how Kyle would possibly have gotten evicted when Turner was in power, leading Kyle to admit to his previous statements about an all-minority alliance.

Joseph, Indy and Jasmine are all appalled at Kyle’s assumptions about the BIPOC players, with Indy so frustrated that she leaves the room entirely. Jasmine reiterates that she hardly ever talked game with some of the players that Kyle implied she was working with, and Joseph is especially hurt because “you made an alliance based on race, but when me and you were put in the yard, the minority Arab kid was doing everything he could to protect you.” (I repeat: Joseph’s too good for this awful Big Brother world.) Make no mistake, though: As angry as the trio is at Kyle, they’re equally peeved at Brittany and Michael, who they feel should have called out Kyle’s behavior immediately instead of sitting on it until it was convenient for them.

THE STRATEGY | Back at the house in the wake of the veto meeting, Terrance campaigns and Alyssa cries. The real headline, though, is that a division between the men and women emerges, after Turner gets wind from Brittany that she, Taylor and Alyssa have aligned. (She doesn’t outright say that the ladies have a tentative Final 3 deal, but she might as well have.) To that end, Turner pitches to Monte and Michael — the latter of whom could use as many allies as possible right now — that they form their own Final 3; not only can they pick off the women, but Turner and Monte can use Michael as a strategic shield, since he’s a bigger target than just about anyone.

EVICTION NO. 1 | By a 4-0 vote, Terrance is the first houseguest sent packing, and he bizarrely opts to pull a Daniel and hug no one on his way out. In his post-game interview, Terrance says that of all his many allies this summer, his true loyalty really belonged to Daniel and Nicole — a choice! — and that he hopes to see Taylor follow him out the door.

THE COMPETITIONS | Now, the fun. And the anxiety. In the Head of Household competition, players must correctly answer questions about sequences of differently colored lasers that they see play in short videos. After all questions have been asked, Turner triumphs as the new HOH; before the commercial break, we see him frantically whispering to Alyssa that she’ll need to go up as a pawn, but Brittany is his true target. (And sort of hilariously, Brittany walks in for her one-on-one meeting seconds later, and Turner pretends he has no idea what he’s doing. “What [move] are you thinking? I’m stressed!” he lies to the woman he plans to evict.)

At the nomination ceremony, Turner indeed puts up Brittany and Alyssa. And just like that, it’s time for the veto competition! In this one, houseguests are chained at the waist to oversized amps, and they must work quickly to untangle just enough of the complicated rope in their playing area that they can use the slack to reach the opposite end of the yard and plug in their amp. At first, it’s looking like a race between Michael and Taylor, but they both come up short on rope and must try again… leaving just enough time for Monte to untangle his rope sufficiently and plug himself in, winning the Power of Veto. And though we’ve seen much footage tonight about Turner, Monte and Michael’s new all-guys alliance, it’s an illusion in the end: Seeing the perfect opportunity to take a long-awaited shot at Michael, Monte uses the veto on Alyssa, and Michael goes up in her place.

EVICTION NO. 2 | To Michael’s credit, even the adrenaline and chaos of the night doesn’t stop him from giving one heck of a final plea, telling Taylor and Alyssa in no uncertain terms that he will protect them and go after Monte and Turner if he stays in the house. The speech does also involve throwing his summer-long BFF Brittany under the bus when he mentions that she’s been leaking a lot of information to a lot of different people in recent days — which is true, but Brittany’s still shocked by the betrayal — but it’s for naught in the end: Monte, Alyssa and a highly conflicted Taylor all vote to evict Michael, and he bolts out the front door without saying goodbye. (Who knew Daniel would be such a trendsetter?)

In his conversation with Julie, Michael regrets blindsiding Brittany with his speech, but he says he’d kick himself forever if he didn’t give that plea everything he had. He also agrees with a laugh that the houseguests made the right call to evict him, and he admits that the all-guys alliance wasn’t really a thing, at least from his perspective: If he’d stayed in the house and Brittany had left, Michael would have remained loyal to Taylor.

OK, your turn. What did you think of Thursday’s double eviction? Were you surprised to see Terrance or Michael go? Tell us below!