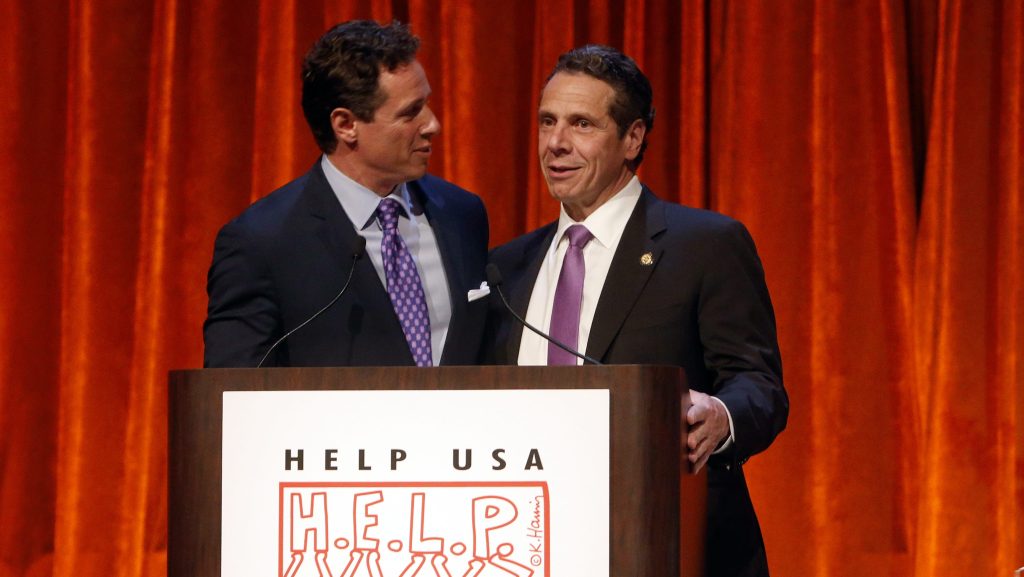 “Before we wrap up tonight there is one more thing I want to say about me, about my brother, my family and you,” said Chris Cuomo finally tonight on CNN about the sexual harassment claims that ended his brother Andrew Cuomo’s long strong armed reign as Governor of New York.

“I tried to the right thing and I want you all to know that,” Cuomo concluded in his primetime mea culpa of sorts. “Back in May, when I was told to no longer communicate with my brother’s aides in any group meetings, I acknowledged it was a mistake, I apologized to my colleagues, I stopped and I meant it,” Cuomo awkwardly added, sounding more like he was offering a share in a 12-step program than any self-awareness.”

The younger Cuomo’s return to his primetime show Monday comes just under a week after his older brother resigned his Empire State top job following a damning investigation by NT State Attorney General Letitia James on August 3 on allegations by nearly a dozen women. Among the women abused by soon-to-be former Governor Cuomo were close aides. Women that the younger Cuomo worked with his brother’s crew to repudiate in a draft statement earlier this year, the NY AG’s report strongly implied.

Before taking off on a conveniently scheduled vacation from the Jeff Zucker-run cable newswer earlier this month, Chris Cuomo for the most part acted like the scandal that had politically engulfed his sibling the once powerful Governor was occurring in an alternate universe. Ignoring the firestorm was his mantra back then and it was tonight too almost right until the end of the show, intentionally.

“My brother, as you know resigned as Governor of New York and will be stepping down next week,” said Cuomo in the beginning of his closing segment remarks. “There are a lot of people feeling a lot of hurt and a lot of pain right now,” he continued threading the professional and personal needle slowly. “My hope is that ultimately everyone involved can get to a better place, that some higher good will be served in all this.”

“And yes, while it was something I never imagined ever having to do, I did urge my brother to resign when the time came,” Cuomo finally fessed up after a nearly 10-minute monologue on himself, his brother and his network. “There are stories and critics saying all kinds of things about me, many unsupported, but know this, my position has never changed.”

“I never misled anyone about the information I was delivering or not delivering on this program,” he went on to say with no small degree of defensiveness. “I never attacked nor encouraged anyone to attack any woman who came forward. I never made calls to the press about my brother’s situation and I never influenced or attempted to control CNN’s coverage of my family.”

Long known to be a more than informal advisor to his older brother and hosting him often on CNN during the early months of the pandemic when the Governor was viewed as a straight-talking star, Chris Cuomo missed his own opportunity to come clean by fully confront the matter as soon as Anderson Cooper handed off to him tonight.

In point of fact, Cuomo dodged the elephant on cable at the jump, and/or went for keeping viewers watching longer for bigger ratings. “It’s good to be back,” he started off the 9 PM ET show with less than stellar chosen words.

“Some of you reached out about my brother’s situation and I do have a note on that,” the second son of former NY Governor Mario Cuomo said in parsed language. “But first tonight I want us to deal with the crisis that is coming at all of us – this is Afghanistan and it is a nightmare.”

Later, Cuomo also used the battle over school mask mandates in the Covid-19 surge of the Delta variant to kill time

Now, along with the global pandemic, no one will deny that Joe Biden’s foreign policy failure in his withdrawal of U.S. forces from the South Asian nation is a very very big story. CNN has been on it all day with the President’s defiant speech this afternoon, the Taliban consolidating control over Kabul and the rest of Afghanistan, woman and girls already being repressed, and bodies literally dropping of American transport planes. A tragedy by any stretch of the imagination, even more so with the 20th anniversary of 9/11 coming up fast.

Cuomo conducted an overview of the two-decade mission in Afghanistan that felt almost as long and haggard as the war itself. Along with rolling out the likes of fellow CNN host Freed Zakaria and other for interviews, the Cuomo Prime Time frontman dragged out confronting his brother’s so-called “situation” and its blast radius upon himself.

Yet, CNN clearly didn’t want to push their high rated host hard to address the issues facing his well-connected family and credibility.

“As for me, I’ve told you, it’s never easy being in this business and coming from a political family, especially now,” a near plaintive Cuomo said in the closing minutes of his show. “The situation is unlike anything I could have imagined, and yet I know what matters at work and at home. Everyone knows you support your family. I know and appreciate that you get that.”

“But you should also know, I never covered my brother’s troubles, because I obviously have a conflict, and there are rules at CNN about that,” he stated in his own defense. “I said last year that his appearances on this show would be short lived, and they were. The last was over a year ago, long before kind of scandal.”

“I also said back then, that a day would come when he would have to be held to account and I can’t do that,” Cuomo declared. “I said, point blank, I can’t be objective when it comes to my family,” he then said. “So I never reported on this scandal and when it happened, I tried to be there for my brother.”

I’m not an advisor, I’m a brother,” Cuomo insisted and dodging his actual participation. “I wasn’t in control of anything, I was there to listen and offer my take” he said, in what is virtually a definition of an advisor. “My advice to brother was simple and consistent, own what you did, tell people what you’ll do to be better, be contrite and finally, accept that it doesn’t matter what you intended, what matters is how your actions and words were perceived.”

While Andrew Cuomo is scheduled to hand over power to Kathy Hochul, the state’s lieutenant governor on August 24, the three-term governor is still actively helming the state. In fact, Cuomo has not yet submitted a formal letter of resignation, as required by law. Earlier today NY State lawmakers reversed course on their decision of last week to end their probe and possible impeachment of Cuomo once he leaves office after encountering a severe political, public and press backlash.

“Do you think he gets what went wrong here?” Chris Cuomo asked Zakaria tonight of Joe Biden’s true perspective on the Afghan exit fiasco. The princeling CNN host might have done better to ask himself and his brother the same question.

We may never know as the younger Cuomo said tonight this will be his “final word” on himself and Andrew Cuomo’s behavior and the consequences of that behavior. That was cool with fellow CNN host Don Lemmon. The 10 PM ET frontman didn’t “joke around” with Cuomo in his usual handoff style. Instead, Lemmon said “happy birthday, it’s good to have you back” to the stone faced Cuomo. “I love you brother,” the duo said to each other and jumped right into talking about Afghanistan – like nothing else ever happened.