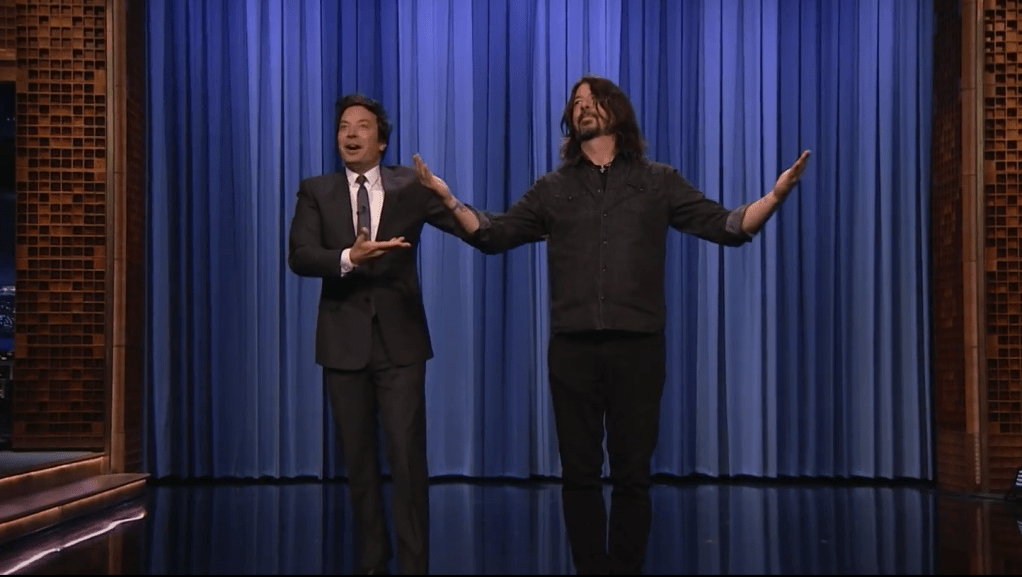 Dave Grohl joined Jimmy Fallon at 30 Rock on Monday to co-host The Tonight Show. In their opening monologue—in which the pair went back and forth, with set-up and punchline—they touched on everything from the return of a canceled celebrity to Timothy Chalamet’s surprising new role.

“You know Dave, if things go well here, this could be the big break you’ve been waiting for,” Fallon joked, as he brought the Foo Fighters frontman and former Nirvana drummer to the stage.

“I’m really happy to be here,” Grohl deadpanned. “This is definitely one of the coolest things that I’ve done today.”

Turning to the news, Fallon noted that Covid cases in the U.S. have dropped to their lowest level in almost a year. “Pretty soon,” he predicted, “the only place you’ll see Dr. Fauci is popping out of a costume on The Masked Singer.

“That’s right,” Fallon continued. “Things are really coming back. Audiences are coming back, restaurants are back…”

“Kevin Spacey is back!” Grohl said.

“No, Dave. No, no,” Fallon responded, feigning concern.

Later, the pair touched on Phil Mickelson’s historic PGA Championship win. At age 50, he is now the oldest golfer to claim a major title, Fallon explained.

“Finally,” Grohl said, “inspiration for older men everywhere that golf is a sport they can pursue.”

The pair also touched on the news, which broke today, that Timothée Chalamet will play a young Willy Wonka in an upcoming Warner Bros. feature. In Fallon’s words, the Oscar-nominated actor has “officially made the jump from Little Women to Little Wonka.”

“It’s the magical story of a young Willy Wonka,” explained Grohl, “right before he grew up and tried to murder all those kids.”

Check out his opening monologue as co-host above.

IATSE Contract Talks Making Progress On Diversity Issues – Not So Much On Economic Front
Lamar Odom Knocks Out Aaron Carter In Celebrity Boxing Match
Ben Affleck Races Motorcycle to J Lo’s L.A. House
‘In The Heights’ Will Mark First Trip Back To Theaters During Pandemic For 96% Of Moviegoers, Fandango Poll Shows
The 6 Suits Every Man Should Own