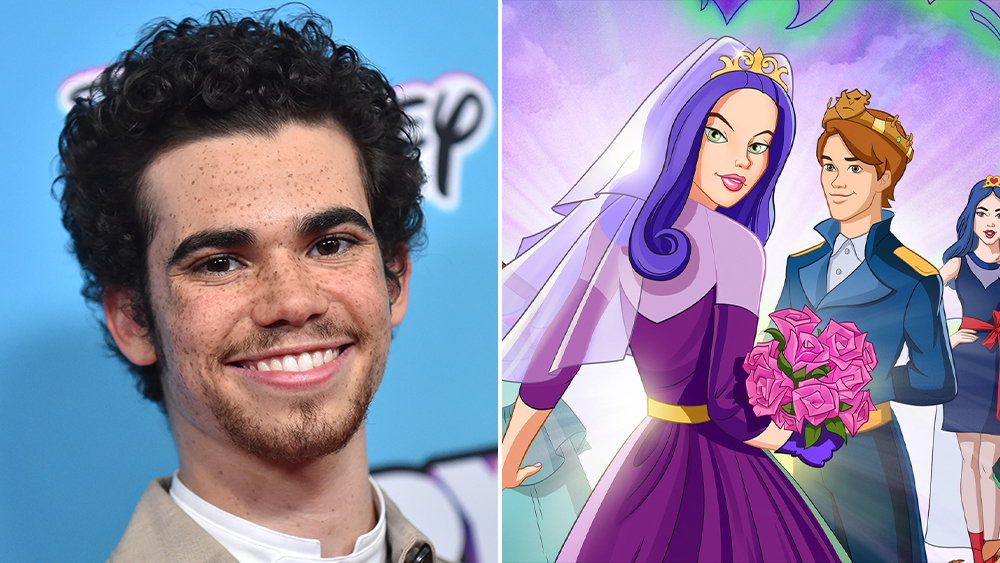 The television special acknowledged the absence of Carlos early on when Mal receives a wedding present of a charm bracelet with all of their family crests, including one of Carlos. The character Evie explained it represents “the four VKs, linked together forever.”

At the end of the episode, as the wedded pair reflected on their memorable day, Mal suggested that “another story could be just beginning,” before the camera pans to a pile of white roses painted red and fading to black in a rabbit hole, teasing that a fourth installment of the Descendants franchise might be on the way.

Before the credits rolled, the musical series memorialized Boyce with a tribute card that reads “In memory of our friend Cameron Boyce.”

Boyce, the star of the Descendants franchise and HBO’s Mrs. Fletcher, died in July of 2019, at the age of 20, following an epileptic seizure.

Descendants: The Royal Wedding, by Sara Parriott & Josann McGibbon and Ricky Roxburgh, is based on the “Descendants” movies by Parriott and McGibbon.  The special is produced by Le Cube with Salvador Simó directing.

Deadline reported early June that 1091 Pictures has acquired North American distribution rights to Runt, with plans for a day and date release, in theaters and on VOD, this fall. The feature-length drama is the last film to feature the late Boyce.

Following Boyce’s untimely death in 2019, The Cameron Boyce Foundation was founded to continue his philanthropic legacy. Its mission is to raise awareness and research dollars for epilepsy and SUDEP (Sudden Unexpected Death in Epilepsy) through digital campaigns and programmatic partnerships. The foundation additionally supports other causes that were meaningful to Cameron, such as Wielding Peace (a campaign that encourages expression through creativity as an alternative to violence) and ending the global water crisis. More information on the foundation can be found here.