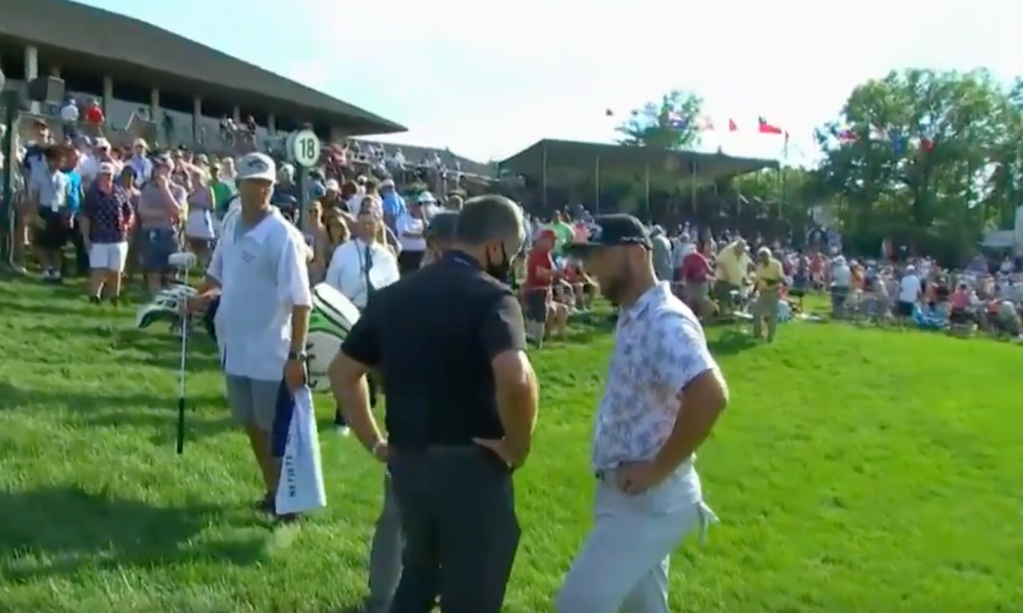 This was an extraordinary moment of live television. As CBS Sports’ Jim Nantz was wrapping up the network’s coverage of the Memorial golf tournament’s third round, saying that “tomorrow will be fun folks,” viewers could see defending champion Jon Rahm, leader by six heading into the final round, double over during a conversation with two men, visibly upset.

As the group was heading to the clubhouse, with Rahm wiping off tears and his caddy turning away the camera that followed them, Nantz, clearly stunned by what he was seeing, addressed viewers.

“What’s going on here?,” he said. “Womebody gave Jon some news. This is not good.”

It turned out the news the tournament officials delivered to Rahm after the final hole was that he had tested positive for Covid-19 and had to withdraw from the event he was so close to winning again. Rahm, who is asymptotic, was tested as part of a standard contact tracing procedure after coming into contact with someone who had tested positive.

“This is one of those things that happen in life, one of those moments where how we respond to a setback defines us as people,” Rahm wrote on Twitter after his withdrawal.

Surreal TV moment as six-stroke leader Jon Rahm learns he tested positive for COVID and Jim Nantz tries to make sense of it without knowing what Rahm’s been told pic.twitter.com/WvD6LmAlxs

Thoughts after today’s round pic.twitter.com/gWkBAWE42F

2022 Awards Season Calendar – Dates For The Oscars, SAG, BAFTAs & More
11 Super Cute Valentine’s Day Sweaters From Amazon That You Can Get for Under $50
Olivia Munn and John Mulaney Share First Family Photo During Baby Playdate With Henry Golding
This $24 Motivational Water Bottle Has 19,300+ Five-Star Reviews on Amazon
Watch Joe Jonas and Sophie Turner Channel Their Inner Kim and Khloe Kardashian In Hilarious Video