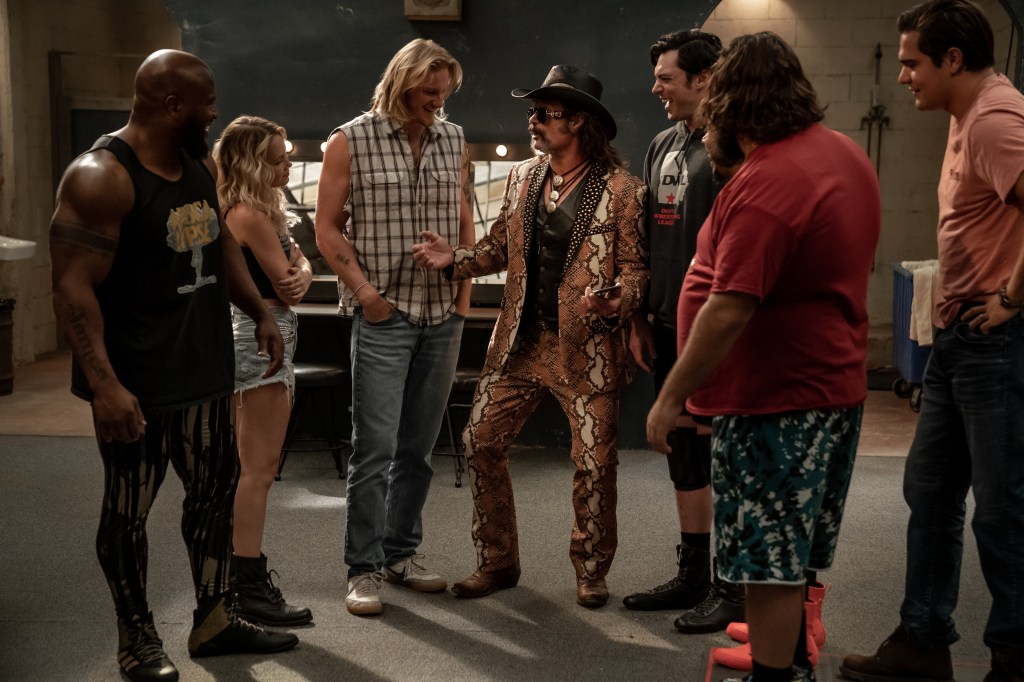 When the new Starz wrestling drama Heels began production last fall, the pandemic posed challenges that were both very new to the industry and also costly. And when dealing with a high contact sport, the stakes are even higher.

“Everybody had to be very disciplined,” executive producer and showrunner Mike O’Malley told Deadline. “We started shooting in late Aug., so the pandemic had been going on for about six months and people were scared they were never going to work again. If we couldn’t figure out a way to work in our business and make television and be responsible, then we wouldn’t make more television. I think there was a responsibility from this group and certainly from my perspective where we felt we had to show this was possible. We tested often, we stayed away from indoor restaurants and away from people. The isolation was very difficult.”

Their fear was valid, as was proven by the challenges faced by WWE and the cancellation of Netflix’s popular wrestling drama GLOW which was already shooting season 4. O’Malley credits the “unbelievable” commitment from Lionsgate and Starz as playing an integral role in their success.

“If I called them and said we had to test somebody, they would say to shut it down for the day,” he revealed. “As tests got better, we could find out sooner if we would need to delay. Their support was remarkable to me because you hear about corporations that don’t care. In my experience, there was never a hesitation. We worked closely with CTH, our health and safety protocol team who were unbelievable. I will say it’s a crazy expense to corporations because of the testing. It was also like learning a new way to work. I really can’t believe that we did it.”

Allen Maldonado, who plays Rooster in the drama series airing Sunday nights at 9 p.m., said he never felt unsafe working on set but it was an “interesting time” considering they were dealing with something unprecedented.

“It was tough because we had to quarantine and we had to count on a longer schedule due to all the new safety protocols and delays,” Maldonado shared. “It’s one of the toughest productions I’ve ever done.”

But the longtime wrestling fan had a lot of fun playing the colorful character and in the ring where he performed many of his own stunts.

“I love the turmoil that Rooster is going through and as the season goes on you’ll see how it all escalates,” the Afro-Latino actor said. “He’s after that championship by any means. I got such a rush from all the crazy stunts I got to do! We had a great stunt team but I did as many of the stunts that they’d let me. When I was an eight-year-old kid, this is what I fantasized about doing so I wanted to take advantage of every opportunity.”

He added, “Growing up, I never imagined that I would inspire others just for existing as an Afro-Latino. I never imagined I would be carrying that on my shoulders. I just worked hard on securing a role, so to be in a position where other people who look like me and come from similar places as me find inspiration is a pleasant surprise and truly an honor.”

Kelli Berglund has similar feelings about being in the ring representing female wrestlers and women in general who dream about working in traditionally male-dominated spaces. She portrays Crystal, the love interest of Ace Spade (Alexander Ludwig), and also his valet.

“When you start researching the history of women in wrestling, you see the way they were treated over the years simply because of their sex. You’ll see all that through Crystal,” she said. “And while things have gotten a lot better since then, in towns like Duffy, they’re 10 to 15 years behind. In the show, we ask the question: why don’t we have more women wrestlers? And we don’t quite have an answer for that. There’s something about Crystal in her unique situation and the circumstances she’s been dealt with. She’s surrounded by all these men and she’s trying to prove herself in this small town.”

She added, “She has so much fight in her and she loves wrestling so much. She makes you want to root for her so hard! Know that for her, things will have to get worse before they get better. But when you see all that she will achieve, there’s this satisfaction. She’s a genuine girl who cares a lot about people, which is the case with a lot of the women on this show. But Crystal eventually realizes she has to put her own goals first.”

‘Clifford The Big Red Dog’ Returns To Q4 Release Schedule, Will Go Day & Date In Theaters & On Paramount+
Dax – Propaganda (Feat. Tom MacDonald) [Official Music Video]
NBCUniversal Warns YouTube TV Subscribers That 14 Of Its Networks Could Soon Go Dark On Streaming Platform
Cheryl Burke Tests Positive for COVID-19 Prior to Dancing With the Stars Taping
You Have to See Beyoncé’s Stylish Accessory for Her Latest Date Night With Jay-Z