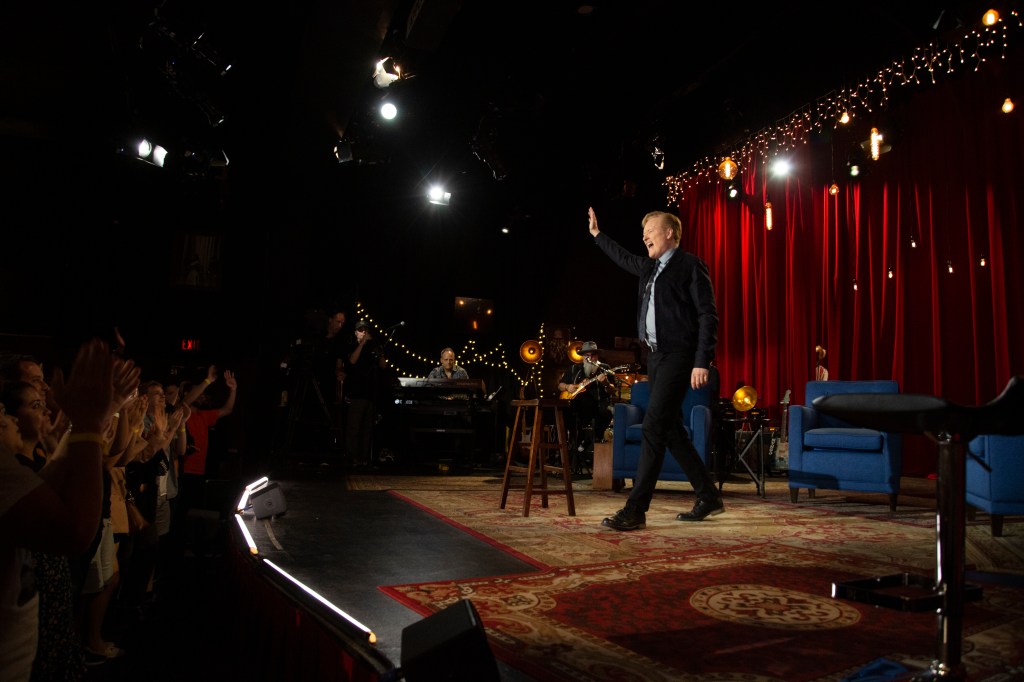 Tributes to Conan O’Brien, from the worlds of comedy, film, tv, music and politics, flooded the internet on Thursday, as the comedian’s TBS late-night talk show Conan aired its final episode.

A number of them came from actors and comedians who grew up idolizing the Conan host, only to become guests on his shows. “As a kid, I loved staying up late to watch Late Night with Conan O’Brien, and I always dreamed of getting to be on the show,” wrote comedian and actor Lauren Lapkus on Instagram. “So cool to have a dream like that come true…It’s the end of an era!”

Actor Josh Gad expressed a similar level of admiration. “There are few with guaranteed spots in the Comedy Hall of Fame, but @ConanOBrien is one of those folks who has reigned supreme in every single comedic endeavor he has set out to achieve,” the actor tweeted. “As his hosting path comes to an end, I am certain the best is yet to come. Lots of love!”

Of course, the host’s peers in late-night were also among those chiming in. Late Night with Seth Meyers producer Mike Shoemaker recalled his time working on SNL, back when O’Brien was writing for the late-night sketch show. “When Lorne [Michaels] said he was going to give Late Night to Conan, every one of us said “Great. He’s the funniest person I know,” he tweeted. “Congrats to all my friends at @TeamCoco on an incredible run.”

Then, there was O’Brien’s fourth cousin, actor, producer and stand-up comic Denis Leary. “@ConanOBrien always makes me laugh. Apparently even louder when he has facial hair,” Leary tweeted. “His “final” show is tonight. Then he reinvents himself again on ⁦@hbomax.”

Conan premiered on November 8, 2010 and ran for 11 seasons. While its host joked on one of his final episodes that he is going to have “a lot of free time” on his hands for a while, he won’t be away from the industry for too long. Up next for O’Brien is a weekly variety show he is developing for HBO Max, as part of his new deal with WarnerMedia.

We’ll update this story with more reactions to the end of Conan as they come in.

There are few with guaranteed spots in the Comedy Hall of Fame, but @ConanOBrien is one of those folks who has reigned supreme in every single comedic endeavor he has set out to achieve. As his hosting path comes to an end, I am certain the best is yet to come. Lots of love! pic.twitter.com/eKxCzfZ5Yf

I was at SNL when @ConanOBrien was a writer and when Lorne said he was going to give Late Night to Conan, every one of us said “Great. He’s the funniest person I know.”
Congrats to all my friends at @TeamCoco on an incredible run.

My fourth cousin ⁦@ConanOBrien⁩ always makes me laugh. Apparently even louder when he has facial hair. His “final” show is tonight. Then he reinvents himself again on ⁦@hbomax⁩ pic.twitter.com/NcHawYxQXk

Congrats @ConanOBrien @TeamCoco! You’re the best of the best. Thanks for always being the funniest person in the room, but more importantly, being kind. Also congrats to me; I look fucking great in this photo. pic.twitter.com/AfJpnlZNQW

Congrats to this funny young man @ConanOBrien on 28 years of his late night programs. One of my absolute favourite talk show hosts, looking forward to your next adventure my friend! pic.twitter.com/JRUYr2VzTA

Congratulations, @ConanOBrien & @teamcoco. It’s been a pleasure being on your show and I can’t wait to see what’s next for you. Here’s a throwback of some fun and unforgettable coffee content we’ve talked about! #TBT pic.twitter.com/bLQZmOsoP0

Thanks to @ConanOBrien for having us on over the years! Congrats on an amazing run. 🙌 https://t.co/RkfoY2yFS8

Congratulations to our friend and brother in TBS time slots, @ConanOBrien, on his show finale. Can’t you see the resemblance?? pic.twitter.com/wwRZnONrRS

So @CarterBays and I were obsessed with Late Night w/Conan O’Brien in college, bonded over it, decided to be a writing team and spent our senior year writing a packet for our dream job on that staff; alas, not meant to be, but it’s part of our origin story & I’m forever grateful! https://t.co/IZBWihadeU

As Conan O’Brien is finishing up the late night format, I remember I was lucky enough to attend his show back when he was in NYC. It was 2008 and my friend Patrick called for tickets to the show. The writers strike had just come to an end so we were lucky enough to get tickets. pic.twitter.com/MD5kBlZaFO

Few people have had a bigger impact on comedy than @ConanOBrien and @AndyRichter have. Congratulations to you guys on an amazing run and thanks for having me on all these years🙌🏻 pic.twitter.com/uJ7vzaV6Rv

Good luck in your future endeavors @TeamCoco @ConanOBrien – you’re welcome for when I came on. pic.twitter.com/1uMlKggcfO

Hey @ConanOBrien what’s going on? It’s just a new chapter, right? Your show is my home. I’ll try and crash at your next show house! pic.twitter.com/IRLzNSRI3M

JB, KG & @ConanOBrien sitting in a tree, they all ummm love late night TV. JB is Conan’s last guest of his late night career. Thanks for always welcoming the D-family to the show over the years. Sorry JB blew your head off that one time! Tune in tonight at 11/10c! pic.twitter.com/PDT3LMxVXj

Congrats @ConanOBrien and @TeamCoco on your incredible run. On top of being consistently hilarious year after year, you have lifted up so many cool voices in the process. Thank you for everything. I can’t wait to see what you and your brilliant team do next! ❤️❤️❤️

This was my first time on the show and as @tenaciousd was playing, @ConanOBrien leaned over and said, “when they come over, don’t let them sit down.”
One thing that was great about the show was the way Conan and @AndyRichter let every guest take part in the fun.
Thanks @teamcoco https://t.co/Z88wqmidge

my first late night standup set happened in 2009 on the Tonight Show with @ConanOBrien.

when he moved to TBS, i got to return again and again.

an honor and a pleasure every time.

much love, congrats, gratitude, and good luck, to Conan, to everyone at @teamcoco, to all. pic.twitter.com/Q9IFE6bymU

Building on the erudite mien of Cavett and the surrealism of Kovacs, @ConanOBrien cultivated the aesthetic sensibilities of a generation as a standard-bearer for American comedy. Revisit his long-awaited interview with a hero: #Pulitzer winner Robert Caro. https://t.co/bZ2KoARP91 pic.twitter.com/Jp8lZwaN3r

In 2016, @ConanOBrien joined us at @CGIU and shared how he builds a better world through humor and humility. Congratulations on your last show this week! #TBT pic.twitter.com/OnHyH43woK

Like so many performers, @ConanOBrien and @AndyRichter gave me my first paycheck in comedy wayyy back in NYC. They allowed me to tell my parents I was “working”. Always a blast being on the show. Congrats on a great run and being nice humans❤️ pic.twitter.com/zGfg0zL2Uw

I’m very proud to be involved in this article, I love you @ConanOBrien https://t.co/4bC8ZP6PLC

Huge thanks to @ConanOBrien and the whole @TeamCoco gang for having me on a hat trick of times and for all the laughs over the years! One of the highlights of my career. Can’t wait to watch the next chapter….https://t.co/5x1xGsqy7t

Jumped at the chance to gush about @ConanOBrien and @TeamCoco before their final shows. ❤️ https://t.co/4jUlgzoTDn

It was like finding a Golden Ticket when ya got to play with the comedic ninja duo of @ConanOBrien & @AndyRichter! and plotting my revenge on the lovely Malcolm McDowell pic.twitter.com/DQM3SaPjNy