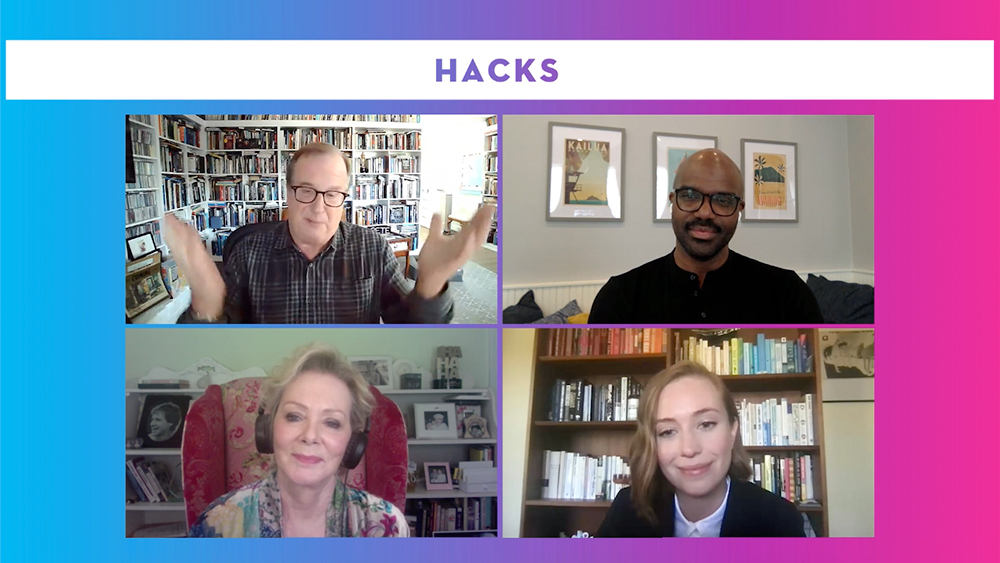 The Emmy comedy categories were looking like a walk in the park for Ted Lasso until HBO Max and Universal Television swept in late in the season with its acclaimed new series Hacks, sweeping up 15 nominations and now giving ol’ Ted a run for his money after just 10 episodes.

The series focuses on a veteran Vegas comedienne, Deborah Vance (think Joan Rivers, Elayne Boosler, others), played by Jean Smart, who hires a young comedy writer, Ava (Hannah Einbinder), to give her some fresh new material and gets more than she bargained for. It is a story of two women of different generations whose personalities may clash, but they are actually both certifiable, and certifiably brilliantly written and performed characters that lit up this season just in the nick of time.

Joining Deadline for Universal TV’s two-part panel at Contenders Television: The Nominees awards-season event were Smart, Einbinder and Carl Clemons-Hopkins, each Emmy nominated for their performances (Smart is double nominee also for Mare of Easttown), along with creators, executive producers and showrunners Paul W. Downs, Lucie Aniello and Jen Statsky.

Smart has been universally acclaimed for her portrayal of the acidly funny Vance, and she knew it was a good thing right off the bat. “I just felt so grateful, and it’s one of those things that you think I wish I was getting these kind of opportunities when I was in my 40s or something,” she said. “But it’s important that Deborah has been around as long as she’s been around, and so I’m grateful to sort of have a role like that where we get to see every part of her life and all the people in her life, and she’s such a complicated person. But it’s just so much fun to play her, and especially when I get to be mean to Ava. That’s my favorite part,” she laughed.

Einbinder says she is proud of the instant chemistry she was able to develop with Smart. “I mean, it’s hard to create, I feel. I think we all got so lucky in our entire cast, but definitely between Jean and I to have, upon meeting, immediately shared this thing that cannot be forced or created. It just is,” she said.

As for who may inspired the character of Deborah, well, Smart threw out a few names. “I think of her as just as a creation,” she said. “I mean, I’ve always loved watching comedians, and I remember the first time I saw Roseanne Barr. She was doing her act before she got the series, you know, in a club in L.A. I just thought she was hilarious. And I always loved Phyllis Diller when I was a kid. I thought she just looked like she was having so much fun, and she was just so nutty. And of course, I always loved Ellen DeGeneres. I’ll always remember her first appearance on The Johnny Carson Show. I just thought she was incredibly brilliant. And of course, Joan Rivers, especially the early Joan Rivers stuff, was just incredible. I mean, her quickness of her mind. It was just something to behold, and Elayne Boosler. I would say of any of those women, maybe Deborah’s more similar to Elayne Boosler just in terms of rhythms and things like that.”

Clemons-Hopkins also is proud the audience has latched on to Marcus, who is Vance’s complex COO of her company. ”I’m just really grateful that people are embracing him and rooting for him and sometimes yelling at him from their living rooms to make better choices and choosing himself.”

After talking with the stars, the creative team behind the scenes shared a few thoughts about how it all came about.

“I think that comes from our love of developing characters and peeling back the layers of who they are, and that can be used for comedic effect or dramatic effect,” said Aniello, who is up for three Emmys including writing and directing. “I think we always wanted to make a show not about comedy, but about people who make comedy and why they make comedy, and for us I think that there’s so much lightness and darkness behind the people who need to laugh the most, and so, I mean, I think that’s a reason why a fair amount of people are in comedy is they’re trying to laugh away some pain, and so, I think that that’s probably why it feels like it could go in either direction in terms of tone.

“We really like having both comedy and drama in it, and you know, it’s always important for us to never make it too sketchy or to ever make it too melodramatic. We kind of try to keep it in the middle because to us that is a reflection of life. Sometimes it is, you do laugh and cry in the same moment, and so for us it’s something we’re always working on, always tweaking, but the tone is something we’re really proud of.”

Downs, who also plays Jimmy, Ava’s manager, says there is a lot of thought that goes into shaping these characters. “We thought also a lot about the way that younger generations sometimes underappreciate the people that came before, and it led us to the idea that this is a great show, following the life of a woman like Deborah Vance who’s like a Debbie Reynolds or a Lucille Ball or Elaine May or Joan Rivers, and then a younger writer who appreciates her as she learns more about her,” he said.

Statsky feels they are really telling a story on several fronts including what it is like to be a woman, of any age, in show business, and hopes the audience sees that aspect. “I hope that they just kind of immediately connected to the story that we’re trying to tell, which is about being a creative person in the industry, but also just in general honestly like being other in the world, being a woman in the arts is a really difficult, challenging path to be on, and so, I don’t know, I hope people connected with that part of it.”

Check back Monday to watch the panel videos.