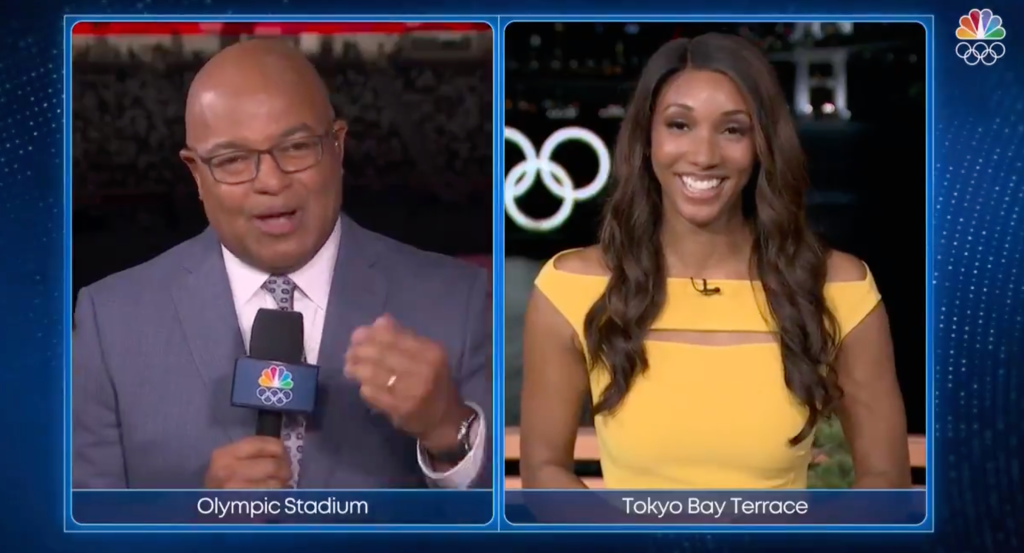 Two days after it was announced Maria Taylor was parting ways with ESPN, the network’s former NBA Finals pregame and halftime host made her debut on NBC, doing Olympics coverage, no less.

NBC Olympics mainstay Mike Tirico introduced Taylor, whom he called a new member of “our NBC Sports and NBC Olympic family,” on Friday during coverage of the Opening Ceremony. He then followed with, “Maria, Welcome to Tokyo and the team.” Taylor posted the moment on her personal Twitter account.

NBC in a release said Taylor would be a host for the Olympics and NFL games, including Football Night in America and Super Bowls, and will work across the NBC Sports properties. In Tokyo, she will joins Tirico as host for Prime Plus, and will also serve as a correspondent, according to the network.

“Maria has excelled in a wide range of roles at marquee events, and will be a powerful addition to our team. We are always looking to improve, and Maria is going to make us better. We are very excited for her to join us right away in Tokyo,” said Pete Bevacqua, Chairman, NBC Sports.

“Incredibly excited to have the opportunity to work with Pete, Molly, Sam, Fred, and the entire NBC Sports family,” said Taylor. “Literally, hosting the Olympics, Football Night in America, and the Super Bowl is what I dreamed of when I started in television – and this would not be possible without standing on the shoulders of all of those who came before me and made this path possible. And I plan to pay it forward.”

Taylor’s exit from ESPN came after turmoil caused by a leak of year-old remarks by the network’s Rachel Nichols, who also covers the NBA. Nichols apologized to Taylor publicly, but the tumult created a difficult situation for the network just before the NBA Finals.

Taylor and ESPN said in a joint statement Wednesday that they could not come to terms on a contract extension and that Taylor was exiting. Her final assignment was covering the deciding Game 6 of the NBA Finals won by the Milwaukee Bucks.

Julian McMahon To Depart ‘FBI: Most Wanted’: “I Am Grateful To Have Had The Opportunity To Play Jess”
Euphoria’s Latest Episode Is Actually Relatable for Once
2022 Awards Season Calendar – Dates For The Oscars, SAG, BAFTAs & More
The Bachelor Fashion Details From Episode 3 of Clayton Echard’s Season
L.A. County Reports 63 New Covid-19 Deaths And 26,354 New Positive Cases – Sunday Update