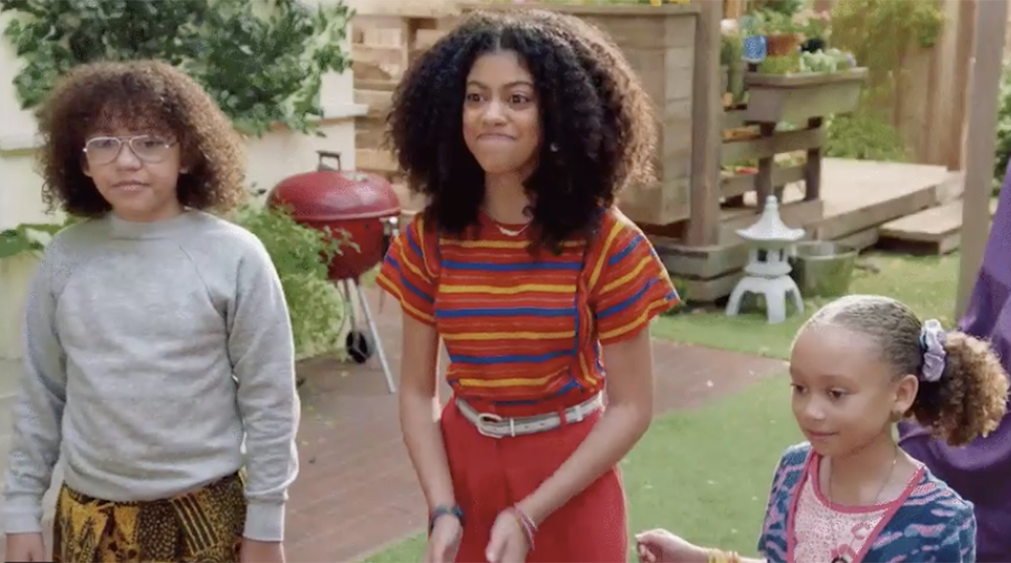 Childhood doesn’t last forever, but according to Mixed-Ish’s Bow Johnson, it paves the way for the adults we’re meant to be. Mixed-Ish, just days after ABC shared that it has cancelled the Black-ish spinoff, wrapped its two-season run with the Johnson children getting a new set of wheels and a better understanding of responsibility.

“Forever Young” kicked off with present-day Rainbow Johnson (Tracee Ellis Ross) in a pizza restuarant with Dre (Anthony Anderson), where she explains the story behind a childhood picture she hopes to recreate for her mother’s 75th birthday. However, present-day Johan (Daveed Diggs) and Santamonica are reluctant to indulge in Bow’s idea, with the former sharing that the photo symbolizes a “horrible day.”

“You lost me, you remember?” he asks Bow.

In the summer of 1987, Alicia (Tika Sumpter) and Paul (Mark-Paul Gosselaar) reward their newly-graduated children with their a set of fresh airbrushed tees personalized with their names, and Harrison (Gary Cole) offers each of them new bicycles. For Bow, the set of wheels means more than just a new toy as she teases the concept of biking to high school, three miles away, in the fall. Alicia, always protective of her children, isn’t fond of the idea and puts her eldest up to the challenge of biking to the store to buy eggs.

“Mom, I was in safety patrol and voted most likely to be a narc, I’m responsible. Let me prove it,” Bow (Arica Himmel) tells her mother.

Tasked with the challenge, the kids ride off to the grocery store. Doubtful, Alicia gets Paul to join her for a tandem bike ride to follow their kids. After their parents see all is good, the kids continue their ride – until Santamonica (Mykal-Michelle Harris) and Bow see that Johan (Ethan William Childress) has suddenly gone missing.

Over at Harrison’s law firm, Denise (Christina Anthony) hopes to inflate her ours by passing the time watching TV in the office, until caught. Surprised by her presence, Harrison gives Denise a cart-full of cases to file, putting a hurdle in her plans. Denise tells Harrison that she had fun completing work that challenged her, and decides to stay in the office after her boss brings up the prospects of a promotion, and better pay.

At a loss at where Johan could possibly be, Santamonica and Bow return home. Their attempts to put their brother’s absence on their parents only go so far as Alicia immediately notices that her son’s missing, confirming her suspicions that Bow is not responsible enough to have more freedom, even if she got the eggs.

When the work gets overwhelming, Denise enlists other employees who were enjoying their weekend to help her complete Harrison’s tasks, much to his dismay. However, he quickly gets over Denise’s cunning ways and praises her creativity and delegation skills.

“You found the two weakest personalities in this office and you exploited them. That’s not something you can teach,” he tells Denise, before offering to help her receive certification as a paralegal.

In the present, Bow, disappointed by her siblings’ hesitation to recreate the family photo, says she’s done being the responsible one, adding that “as far as I’m concerned, I’m an only child.”

“If they only knew how much I did for them,” she continued.

Back in the past, Bow remembers the precarious set of stairs Johan previously mentioned as a hot biking spot. Leaving Santamonica at home, Bow finds Johan at the stairs where he looks to ride down to prove his masculinity, despite his “girly” looking bike. Bow reassures him such a feat isn’t necessary, before she accidentally pushes him down the stairs. They return home where Alicia explains her initial caution.

“I’m just being overprotective. Your’e all going to different schools for the first time and the one good thing about the commune is you’re never alone. Also if you’re independent now, you may not need me,” she tells Bow.

After hearing Bow’s side, present day Johan and Santamonica praise their sister for her endless care, kindness and sense of responsibility. However, only Johan can make it to recreate the photo as Santamonica’s in Florida for a convention.

The final sequence sees the Johnson children and their family in the backyard gathering to take the family photo, immediately followed by the present-day snapshot that saw Dre in Santamonica’s spot. As Alphaville’s “Forever Young” scores the last scenes of Mixed-Ish, Bow celebrates childhood and reflects on how her early years set the path for her present day life.

“Childhood prepares you to become the adult you end up being, whether it’s a carefree wanderer with an adventurous spirit, or a confident entrepreneur who’s never afraid to take a bet on themselves,” she says. “As for me, I realized that I was destined to be a responsible, caring woman, that had a fulfilling family life, impeccable style and a successful career as a doctor.”