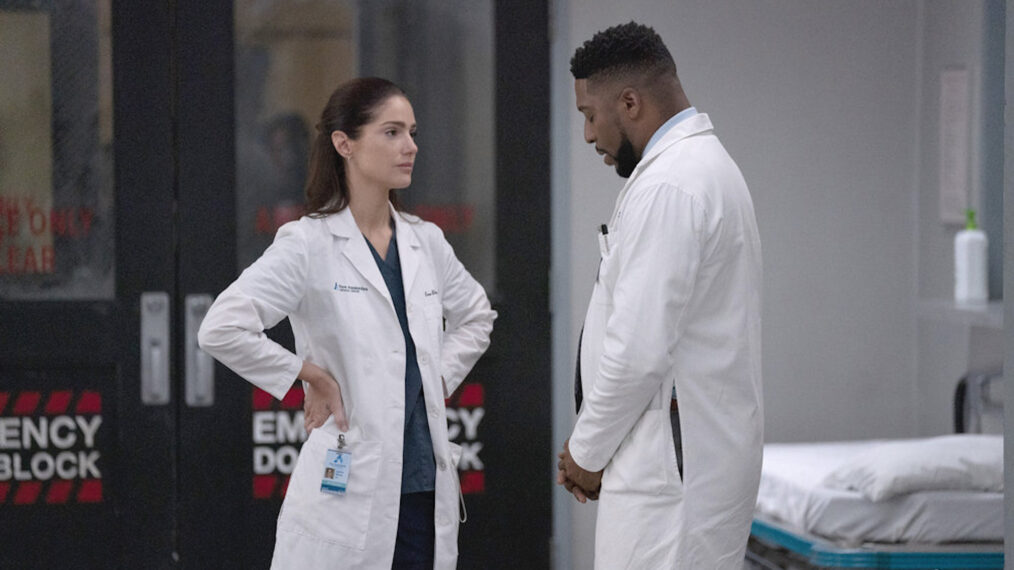 “How can I help?” It’s the question that Dr. Max Goodwin (Ryan Eggold) asks all the time in New Amsterdam. But in the case of “Maybe Tomorrow,” that’s not enough.

The episode begins with the doctors learning about Roe v. Wade being overturned. There’s no dialogue in the opening, making it even more powerful (and reminding us how well New Amsterdam does things like this).

It’s only after the title card that the scene erupts with sound, with the hospital staff reacting to the news and Karen Brantley (Debra Monk) ordering everyone back to work. From there, we see how the case affects everyone as well as what they try to do to help. But that’s much easier said than done, no matter what resources they might have offered. (Monk and Janet Montgomery deliver the standout performances of the episode as their characters deal with all of that.)

Dr. Lauren Bloom (Montgomery) tries to get Dr. Floyd Reynolds (Jocko Sims) to cancel a tour they’re giving students wanting to go into medicine. She can’t “forget about all the women out there with unwanted or dangerous pregnancies, just forget about my own life,” she says, revealing she had an abortion. “It was a while ago. I was addicted to Adderall. I couldn’t be pregnant, and I really couldn’t be someone’s mother.” But what Reynolds focuses on is the “when.” And yes, it was when they were together.

Over the course of the tour — which interrupts several of their conversations — Reynolds pushes Bloom to explain why she didn’t tell him. “This may blow your mind, but I wasn’t thinking about your feelings very much at all,” she says. He argues she didn’t know what he wanted, but “I took your dumping me as a pretty clear indication,” she tells him. “When you told me that I didn’t fit into your life plan, me having your baby would’ve changed that?” And as she sees it, they’re now just talking about how he feels about it: “We’re suddenly, but not surprisingly, taking care of you.”

Though Bloom at first tells him that she didn’t have “any” feelings about the abortion and “it was not a big deal,” she opens up at the end of the tour when one student asks why they’re acting like nothing happened. With Reynolds listening, Bloom shares that she’s had two abortions: one in college after someone slipped something in her drink and she woke up in a stranger’s bed with no memory of what happened, and the second when she “was falling in love with someone who would’ve made an amazing father but he told me I didn’t fit into his future.”

Both were difficult times, “but deciding whether or not to have an abortion, that was clear. And I was able to do the right, responsible thing, and I was able to get it done safely and quickly,” she continues. “But you know what? The circumstances, they shouldn’t even matter. You should be able to get an abortion simply because you are pregnant and you don’t want to be. That is the very definition of choice. Dr. Reynolds and I, we became doctors to help people. That’s why we come here every day. It’s our strongest calling. Do you want to know what I think about today’s ruling? You guys want to be doctors, nurses, med techs? Then you should really think about getting into obstetrics and gynecology. Because we really need you, now more than ever.”

After, Reynolds says he learned from what she said, and later, he joins her in marching.

That same day, Dr. Elizabeth Wilder (Sandra Mae Frank) must tell a patient that to treat her for cervical cancer, they need to perform a D&C. However, Michelle (Zoe Mann) refuses: She was celebrating the end of Roe v. Wade this morning. And so, Wilder tries to come up with other options. She eventually performs a very risky surgery, one that will have life-long consequences, but even that’s not enough, not once she’s seen how much her cancer has progressed.

Again, Wilder recommends an abortion so they can aggressively treat her cancer, but again, Michelle refuses and instead will find another doctor. As she sees it, this isn’t just about her politics but her beliefs and who she is as well. She asks Wilder to tell her what she believes in most, then betrays it. If she can do that, she’ll agree to Wilder’s plan. But the doctor, who believes in the right to choose, can’t.

Protestors gather outside the hospital’s women’s health center. Dr. Iggy Frome (Tyler Labine) steps in to de-escalate and ends up punching a man who grabs a woman trying to go inside. Karen intervenes and is able to talk the man out of suing New Amsterdam and putting Iggy in jail — if the psychiatrist apologizes. But Iggy can’t do that.

And so Karen calls in Martin (Mike Doyle) to talk sense into his ex. While Martin is proud of him, he’s also realistic. They have kids, and if one parent lost his job and gained a criminal record, that would mean trouble in the best of times. But now, there’s the worry that courts will reconsider outlawing gay marriage, and they could be living in a country that would take their kids from them. They can’t worry about that and what Iggy having a criminal record could mean in that situation. That gets through to Iggy, who agrees to apologize and does — after imagining a scenario in which he can’t do it and lectures the man on how he’d feel if one of the rights he cared about was taken away.

Later, at home, their daughter Sameera (LaRae Muscat) makes them proud when she reveals she’s no longer going to camp in South Dakota because of the abortion ban. It’s small, but it’s all she can do.

How Can Max Help?

Immediately after sending everyone back to work, Karen turns to Max: “Do something. … Fix this.” He argues that the Supreme Court made a decision. “What if I were to give you all the resources this hospital has to offer, carte blanche? What if the only words to come out of my mouth today were yes, and how much do you want? How can you help?” she asks, emotional.

Max does make calls to “do something massive, something fast, something to help fix what happened today,” reaching out to those who are most affected. He even tries to enlist Todd (Darren Pettie) to open an abortion clinic on a military base. That’s a no-go. But one of their conversations leads Max to his next idea, and he introduces Karen to his plan to start a line of floating abortion clinics. If the boats are in federal waters, then those in Texas will have an option. The only problem? The boat he’s looking at won’t even make it to Jersey.

So Max decides, “I keep trying to think of all these legal ways around this decision when obviously the only solution is actually completely illegal.” He wants to open an illegal clinic in Texas. It won’t work. Then he suggests an entire floor of New Amsterdam, and the hospital will fly up patients from Texas. Again, no. As much as Max wishes he can help, he just can’t.

Karen then reveals the personal reason why she’s so willing to offer Max whatever he needs: In 1968, her best friend “got in trouble” and died when something went wrong with the procedure. After that, Karen got into the fight and went to every march and protest: “We fought and fought, and in 1973, we won. I can’t believe we’re back here again.” And Max is concerned about the world in which his daughter will grow up. “I’m sorry, Max,” Karen tells him. “I shouldn’t have asked you to fix this. It wasn’t fair. it wasn’t realistic. What can one person do?” (What he can do: Go to the OB/GYN department and try to do a D&C.)

Later, at home, Luna picks up on the fact that her father is sad. “A sad thing happened today. Not just to me, to everybody. And I guess it made Daddy a little sad, a little mad, and a little frustrated,” Max explains. “I wanted to make the world a little better for you. I couldn’t do it.” Luna asks, “Maybe tomorrow?” Unfortunately, “maybe not even tomorrow, but I’m not going to stop trying. No matter what,” he promises.