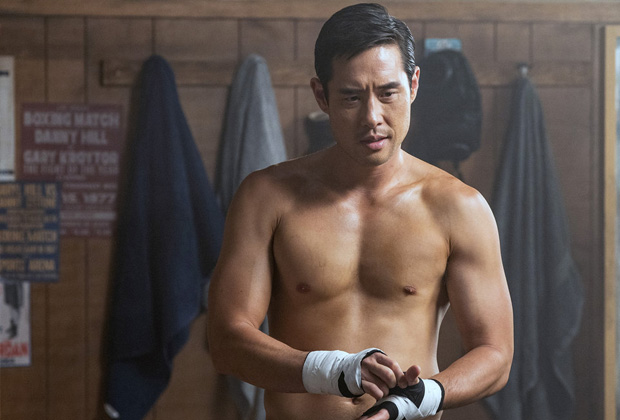 In this week’s Quantum Leap, Ben found himself in the body of a boxer named Danny Hill (played by Jermaine Alverez Martin) in 1977.

The team was still working on Ben’s coding, so it may take some time to figure out how to get him home. In the meantime, he must focus on helping this fighter from losing a championship fight which cost him his career. Reports stated he was distracted and unlike himself. Ben was there to figure out what happened.

In present day, Ian worried that Addison was running herself ragged. But with Ben still out there, she wanted to focus on sticking with him until he returned. Fun fact: Ben and Addison love The Real Housewives of Beverly Hills because they have taste.

Magic called a meeting because the Pentagon is on his back, and he needed to know whether to come up with a short-term lie or something that ran much longer. Ian relayed to the team that Ben leaped into a path that went beyond his own lifetime — something they didn’t think was possible — meaning he’s not coming home for a long time.

In the past, it looked like Danny was distracted by the potential loss of his family’s gym. His brother Darryl (guest star Jon Chaffin) ran out of money and got involved with a local gang. Records showed that after Danny’s loss, Darryl had mounting debt and took his own life. Addison believed Ben leaped into Danny to save Darryl’s life.

Ben was determined to give the brothers a win. That meant looking at footage of the actual fight and rehearsing his exact cues with Addison. Noticing that Addison was running on fumes, Ben suggested they stop, and she fainted mid-sentence. She awoke in a hospital bed in present day with Magic urging her to rest.

Ian realized that Ziggy was running slow because Janice hacked into the system remotely. If he rebooted, he could lock her out, but that also disconnected them from Ben, and they wouldn’t be able to make contact until after the fight. So they had to leave it as is.

Janice dropped by Beth’s house to understand why her mother sabotaged her attempts to join the Quantum Leap program. Beth thought she was protecting her daughter from what Al went through since he never got over losing Sam. This was just a distraction, though, because Janice spiked her tea to get her out of the way so she could grab what she needed.

At the gym, Addison recognized Darryl’s emotional outburst over his wife coming to his brother and not him as a sign of PTSD. As that sunk in, Darryl was arrested for punching Danny’s opponent earlier in the episode. That had to be what distracted Danny in his big fight. To combat this, Ben also got himself arrested. He then tried to get through to Darryl, pleading with him to see a doctor. But Darryl couldn’t unsee the horrific things he experienced in Vietnam. After talking through his feelings, though, he finally agreed to get help.

But Danny still needed to win the fight. During the match, Ben landed the blow that should have won, but it didn’t work. He then took a punch that briefly knocked him out, and into a vague memory of waking up with Addison. He got back up and won the fight, and Danny and Darryl’s lives were changed for the better. Darryl went through treatment and started one of the first veteran support groups for PTSD in the country.

Addison also broke the news that Ben’s new code was taking him on a journey, and they don’t know how long it will take to bring him back. That’s when Ben made her promise to take care of herself if she was going to continue being at his side. He also brought up the memory, the someone he couldn’t remember who was in bed with him. But before he could finish his sentence, he made another leap.

At home, Addison and the rest of the Quantum Leap team hung out to watch Real Housewives, which was her and Ben’s Wednesday night ritual.

Magic received a called from Beth, who revealed that Janice stole equipment from the original project, including an old hand link for Ziggy. Wait, was she building her own Quantum Leap machine? This is bad.

Elsewhere, Ben landed in a bar with The Human League’s “Don’t You Want Me” playing in the background.