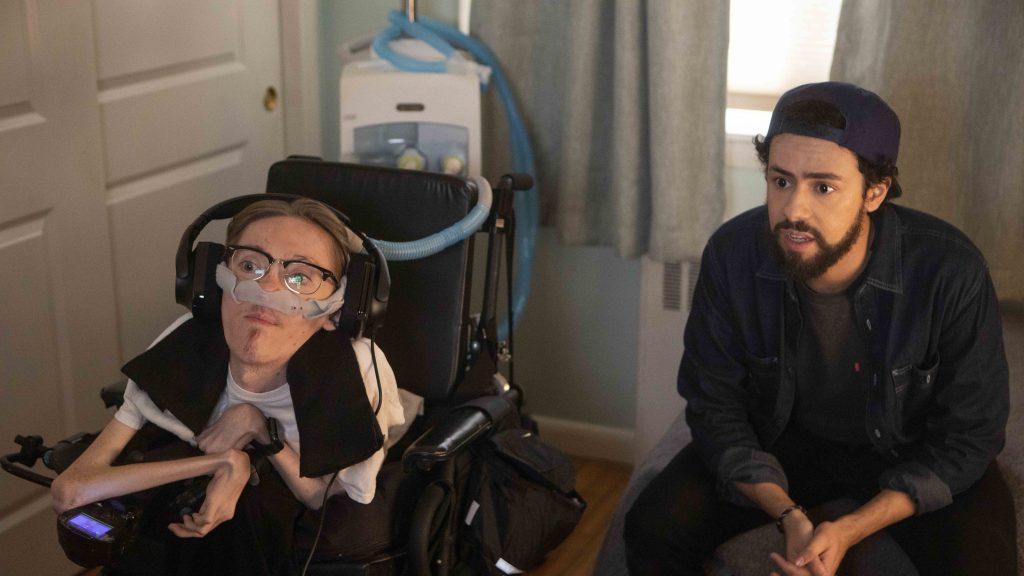 During a pre-recorded ATX panel airing Saturday, Ramy actor Steve Way slammed the Motion Picture Academy for its failure to provide all necessary accommodations for the disabled, prior to this year’s Academy Awards, where a wheelchair ramp was introduced for the first time.

“At this year’s Oscars, we got a ramp, we got an ASL interpreter—for one segment—and everyone’s like, ‘Oh my god, this is great,’” Way said. “It’s progress, yes. But you’re also admitting that for the past 31 years, the [Academy] has been violating federal law by not having a ramp and interpreters.”

A ramp was introduced at the 93rd Oscars as a means of access to the stage for James LeBrecht, the co-director of Crip Camp, who uses a wheelchair. Unfortunately, as actor Ryan J. Haddad (The Politician) noted during the panel, the ramp may have only been added, given LeBrecht’s own assertiveness. “Jim foresaw a possible nomination and said, ‘I am not going to be separate and unequal,’” the actor said, “and that’s why we got the stage that we got.”

Also featuring actresses Sofiya Cheyenne (Loudermilk) and Kayla Cromer (Everything’s Gonna Be Okay), and writer/producer Katherine Beattie (NCIS: New Orleans), ATX’s panel “The Messy Middle” brought various disabled creatives together to reflect on historically limited representation of disabilities in film and TV, and ways in which that can be remedied.

For Haddad and Cheyenne, the Oscars debacle perfectly illustrated how problematic the lack of representation in media is for people with disabilities. “We have our own internalized ableism that we’re grappling with all the time,” said Cheyenne, “and something like that can [make us think], ‘How would that opportunity [of winning an Oscar] ever be for me?’”

When Haddad first heard that the ramp introduced for the 93rd Oscars was the first in the history of the ceremony, he says he thought, “Oh, I’ve become so desensitized to our invisibility in this industry. I’ve become so accepting of not even being allowed to be part of the conversation.”

During the wide-ranging conversation, moderated by IndieWire’s Kristen Lopez, Beattie pointed out the unfortunate fact that Crip Camp, a documentary about the revolution in disability rights, lost out at the Oscars “to an octopus,” at the center of Netflix’s My Octopus Teacher. At the same time, Cromer pointed to a problematic contradiction when it comes to awards, which negatively affects the disabled community. “When it comes to awards season, everyone knows that if you pay a disabled character without a disability, you’re going to win,” she said. “But when you’re [a real disabled awards contender], you’re doing all this press and still not getting acknowledged, and it’s a whole different thing.”

The ATX panelists said that many times, the lack of representation of people with disabilities in entertainment has been disheartening, to say the least. “For some reason whenever it’s about us, when it comes to diversity and inclusion and equity, we’re always left out,” said Way. “We’re always the exception to the rule, and it’s really getting a little old.”

Still, he and his fellow panelists are intent on creating a Hollywood, going forward, that is more inclusive of the disabled, thereby more fully reflecting the entire spectrum of human experience. One way to do this, from Beattie’s perspective, is to make sure productions “normalize the question,” as to the kinds of accommodations each disabled person wants and needs, recognizing that no two people are the same. Cheyenne touched, for her part, on the importance of ‘artivism,’ community organizing and mentorship, in paving the way toward a better tomorrow.

Beattie, Cheyenne, Way and Haddad also said that looking to the future, it will be important to have more disabled journalists in entertainment, who can speak to disabled stories from a place of understanding. “If we want our stories to be told authentically, then we have to have people who understand what that’s like to help us through that,” said Way. “I don’t think its unfair for us to request that because I think anything less than that …is not just unfair to us. It just keeps perpetuating this terrible cycle that we’ve seen in the industry for decades.”

“If we’re going to dig deeper into things,” Beattie added, “we need to have disabled people involved in all levels and all positions in media.”

Haddad recalled observing works in the theater which he felt did “damage to disabled characters and narratives,” and recognized that reporters would be well placed to take them to task. “I think journalists could and would have the power to call these things out, [whereas] actors aren’t given the authority,” he said. “What am I going to do, post a Facebook status? And how is that going to help? Whereas an article really could move the needle.”

At the start of conversation with Lopez, the panelists each recalled looking outside of their community for role models growing up, given that disabled people were so seldom depicted on screen. “As a kid you just think you don’t exist,” said Beattie, “and you don’t know why.”

While Cromer noted that introducing better representation to Hollywood will be “a process,” the ultimate takeaway for the panelists was that strides toward diversity, equity and inclusion in Hollywood will always be well worth fighting for. “We do belong,” said Cheyenne. “We’re part of this society; we’re part of the world.”

“We’re here, and we should be here all the time,” said Haddad.

The industry is “definitely starting to change,” added Way. “I don’t think we would all be speaking right now if it wasn’t changing. But godd*mn, we’ve got a long ways to go.”