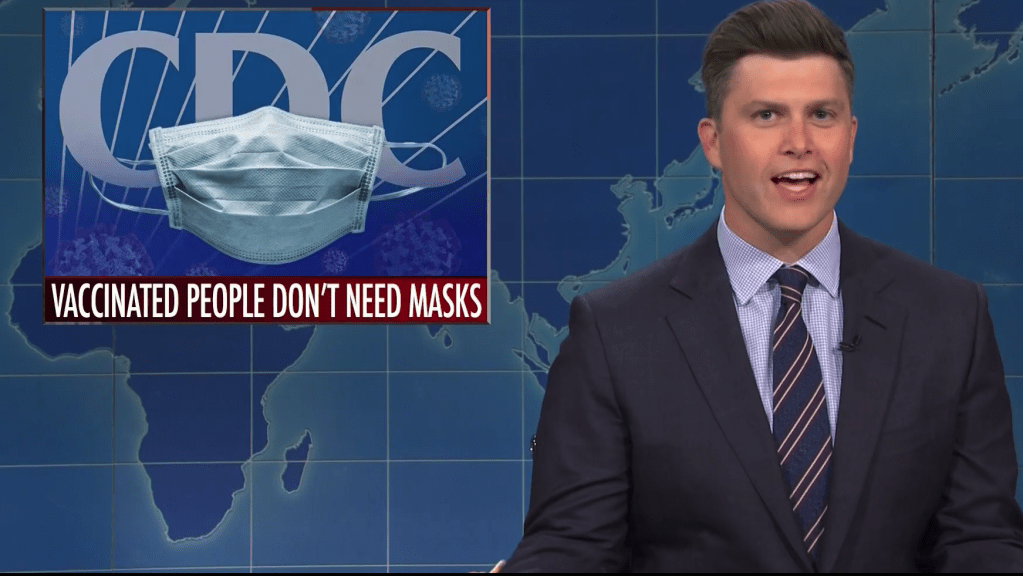 “Guys, great news this week,” Jost exclaimed, as he kicked things off. “The CDC announced that fully vaccinated [individuals] no longer have to wear masks or socially distance—except if you go to most places.”

After the announcement, he continued, President Biden told Americans to take off their mask and smile, “even though ‘take it off and smile’ is the first example in every workplace harassment seminar.”

Later, Che noted that House Republicans have voted to remove Liz Cheney from party leadership, after she repeatedly challenged former president Donald Trump’s claim that the 2020 election was stolen. “Wow, I never thought I’d find myself feeling bad for Liz Cheney,” he said, “and I was right. I don’t.”

Che also commented on Update about a story Deadline told you first. “It was reported that Tom Cruise protested the lack of diversity at the Hollywood Foreign Press by returning his three Golden Globe statues,” he said, “which was tough for him because they were sitting on pretty high shelves.”

Toward the end of Update, Jost and Che were visited by Rep. Liz Cheney (Kate McKinnon), who bemoaned being left high and dry by Republicans. “Colin, the Republican Party is changing. I don’t know what happened. I don’t know what I did wrong,” McKinnon said. “Look at me, I am everything a conservative woman is supposed to be: blonde, mean.”

“Republicans, I’m trying to save you. You’re like horses who won’t leave a burning barn: You’re going to die. Accept the help,” McKinnon’s Cheney continued. “Trump lost, to my chagrin. I voted for him. I loved him like a straight sister, but he lost and he incited a riot, and that’s the truth.”

Also making an appearance at the desk was Bob Baffert (Beck Bennett), the trainer of Kentucky Derby winner Medina Spirit. Baffert was in attendance to explain away the recent controversy, which saw the thoroughbred test positive for steroid use.

The third panelist of the night was cast member Andrew Dismukes, who appeared to discuss his memories of his great-grandmother “Old Mamaw” and his love of the Disney Channel Original Movie Brink!

Check out the opening segment of Weekend Update above. Segments on Cheney, Baffert and Dismukes, and more jokes can be found below.