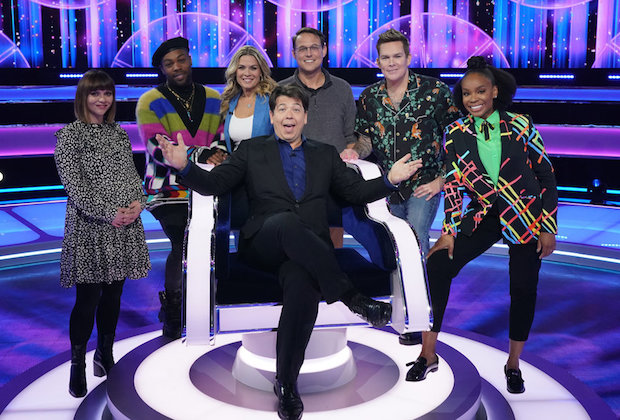 NBC on Monday night rolled out The Wheel, its version of the UK game show created by host Michael McIntyre. Will you keep watching its 10-consecutive-weeknights run?

Running Monday through Friday this week and next, NBC’s The Wheel is also hosted by McIntyre, who is best described as, what, a slightly more freewheeling, more sincere James Corden…?

The titular Wheel has six celebs (versus seven across the pond) seated around its perimeter, each of whom boasts a Category of expertise (e.g. Steve Kornacki/Politics, Amber Ruffin/Late Night Hosts, Christina Ricci/Classic Films…).

A secondary wheel located on the level below seats three potential contestants who are randomly chosen to ascend to the game play area. When a player arrives, they pick one of the six categories and its “expert” celeb is bathed in golden light. But before The Wheel spins, the player also chooses one celeb (who is presumably a dunce on the topic at hand) to be “shut down”/bathed in red.

As The Wheel spins, the celebs dance/wriggle in their seats and or “sing along” to the theme, while McIntyre gamely employs “body English” to nudge the selection arrow toward the “gold” or away from “red.” (Though it’s of course all theater.)

If The Wheel lands on “red,” the contestant loses their turn and is sent back down, and once again one of the three players is randomly chosen to play. (Meaning, as happened tonight, Sam got back-to-back chances, and wound up amassing a nice Bank.)

If The Wheel lands on the “gold” expert, a correctly agreed-upon answer to a multiple choice question adds $10K to the bank; if the player gets teamed with anyone else, the value is $5K.

A correct answer knocks out that Category, and once all six are cleared, there is a final “cash in” question to claim the Bank total. The contestant who happens to playing at that time can choose to team with the celeb who has answered BEST all night long (on their personal keypad) and hope for just half the Bank… pick the celeb who has done WORST all night and chase double the Bank total… or go with the celeb in the MIDDLE and get simply all of the Bank. Which introduces a fun bit of strategy.

(You didn’t see it on Monday night, but if the first player to face a “cash in” question answers wrong, they are sent back down and once again a contestant is randomly chosen to come up top. Meaning that, theoretically, someone who hadn’t been topside adding to the Bank could finally get chosen and be just one right answer from claiming the payday. Which seems… kinda crappy?)

I’m cynical about game show wheels that are not actually spun by physics (e.g. Fox’s long-MIA Spin the Wheel) but by a computer. And of course, the “random” selection of contestants both nights that I watched managed to get all three some playtime. This is also one of those over-produced primetime game shows where, like The Chase, they make us wait juuuuust a bit too long for the chosen answer to be flagged as correct or not. Take note, everyone! Your sire Who Wants to Be a Millionaire offered brisker game play and didn’t over-inflate that wait time.

I am admittedly wholly unfamiliar with the UK’s The Wheel, whereas I know that many of you know it well. Grade NBC’s take in the poll below, and weigh in further in Comments!