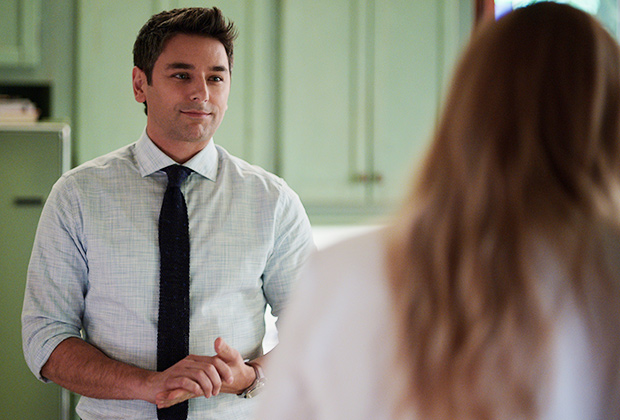 We need to talk about Cameron.

One of the new faces introduced in Virgin River‘s fourth season, Dr. Hayek (Mark Ghanimé) makes an instant impression on the townsfolk, especially the ladies of the sewing circle. And can you blame them? It’s not every day that a handsome new doctor moves to the middle-of-nowhere locale, so it comes as no surprise when Muriel tells Jack, “It’s about time you got some competition around here, mister.”

No Virgin River fan worth their salt actually believes that Cameron could come between Mel and her man — especially when you remember that she might be pregnant with his child — but that doesn’t stop Cameron from trying.

“[Mel and Cameron] get along well in some ways because they come from the same medical world,” Alexandra Breckenridge tells TVLine. “But I was surprised in the [season premiere] at how bold he was. In one of those first scenes, he says, ‘You called me attractive.’ Mel is like, “Wow, that’s not what I meant.’ He didn’t know she had a boyfriend at the time, but it was pretty forward. Mel really took it in stride and was relatively kind about it. The old Mel would have chewed him alive for it.”

The one-sided flirtation continues throughout the season, with multiple characters — everyone from Doc to Brady, of all people — questioning Cameron’s intentions. To his credit, Cameron never makes any unwanted advances towards Mel, but he does cross a line in Episode 11. Without giving too much away, let’s just say that he offers some unsolicited advice about Mel’s relationship with Jack that she does not appreciate.

“For the amount of time they’ve known each other, he really oversteps when he gives his opinion about Jack,” Breckenridge says. “It clearly comes from a place where he’s developed a crush on Mel. She knows it, but she doesn’t really want to admit it. We’ll see where that takes them in Season 5.”

Speaking of Season 5, filming is currently underway — and it’s going to test Mel’s patience in ways she never expected.

“She knows that the clinic is going to need a new doctor [when Doc retires], and she wants to make all of that work,” Breckenridge says of Mel’s working relationship with Cameron moving forward. “I can’t imagine Mel being able to hold back her true feelings about that and being so kind to him. She’s just being kind because she wants him to stay at the clinic.”

What are your thoughts on Cameron? Did he really overstep, or was he right to offer advice based on his own failed relationship? Are you hoping he and Mel can work things out at the clinic? Drop ’em in a comment below.