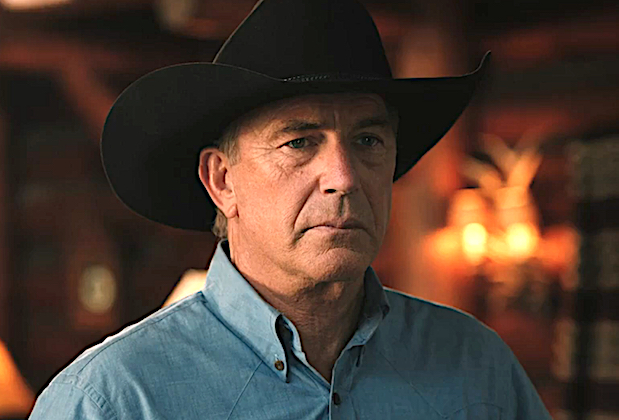 ‘WHAT’RE YOU GONNA DO, HALF PINT?’ | After a flashback in which a young Rip accidentally killed Rowdy, who’d made the mistake of pulling a knife during their fistfight over Beth, “The Dream Is Not Me” cut to Jamie becoming further entangled in Sarah’s web. The Yellowstone, he insisted, was “the only thing I ever loved.” (So much for his son, then.) Well, Sarah could help him save it; all he had to do was ask. Meanwhile, back at the ranch campsite, Monica noted that Beth hurled zingers at Summer, Laramie and Abby but not her. Monica didn’t want to be treated differently just because she’d lost a child. But Beth argued that she deserved to be treated differently — and confided in her sister-in-law that she’d known firsthand how that loss feels. In fact, she still felt that way every day. When Monica theorized that that keeping such a devastating secret was why Beth was so mean, she shrugged off the notion. “I was a real f—king bitch before it happened,” she admitted. “You’re very good at it,” Monica replied. Priceless s—t.

‘I’M TOO CURIOUS FOR COFFEE’ | At a meeting with Chairman Rainwater, Lynelle revealed that the Department of the Interior had approved plans to run two pipelines through the reservation, directly beneath its reservoir. She was telling him before an announcement was made so that he could get ahead of it and hopefully make enough noise to get the project moved elsewhere. And though she was willing to stand with him at a press conference, she couldn’t guarantee that John would do the same. In that case, Thomas said, maybe she could remind him that he’s the Native Americans’ governor, too. At the ranch, John filled in Beth on their predicament, sending her blood pressure through the roof. He argued that his business model had worked for hundreds of years. Was that why they weren’t surrounded by more ranches? No. All the others had been unloaded. “People don’t sell business that make money,” she pointed out, “they sell the losers.” Of course, she might as well have been talking to a cow.

‘HE HATES ME FOR BECOMING THE VERY THING HE FORCED ME TO BE’ | Ahead of a surprise meeting with Sarah and Ellis, Jamie’s secretary, who is sneakily becoming one of my favorite characters, warned him about his new lover. “Women know women,” she said. “Men know what a woman wants them to know.” If only Jamie wasn’t in too much of a sex daze to listen! In his office, he learned from Market Equities’ tag team that John had put the ranch in a conservation easement. Jamie could technically override the move, but now they’d be fighting the legal defense funds of environmental groups. Ultimately, Market Equities would sue Montana for a bad-faith negotiation and bankrupt the state. Unless… Hmm. What John did “sounds like an impeachable offense to me,” Sarah purred. Were John to resign or be removed, a special election would be held — one that ME would ensure that Jamie won. So go before the assembly, she encouraged him. Make the case against John “and get our f—king land back.”

‘YOU ARE A RANCHER, I AM A BUSINESSMAN’ | Before John took the whole ranch to the county fair, Beth made a call to the Four Sixes and gleaned enough intel about its business model to hatch a plan to save the Yellowstone — and this was before she found out that Rip was being shipped to Texas for a year! At the fair, Kayce and Monica marveled that they’d “reached the point where we’re just a bank and a taxi” to Tate, who seemed to be becoming pals with Carter. Colby won Teeter a teddy “bar.” And in response to Rip’s news, Beth… said that she’d go, too. “Well, we swore to spend our lives together.” So she’d get a suite at the nearest Hyatt and drive to him for Happy Hours! Abby, on the other hand, wasn’t about to do the same with Ryan. “Chasing a dream, I understand, and I hope you catch it,” she told him. “I just wish that dream was me.” Nearby, while Clara made out behind him, John used his hat to keep anyone from noticing him kissing Summer. Little did anyone suspect that at that very moment, Jamie was preparing a speech to call for John’s impeachment.

So, your thoughts on the episode? Will Beth’s plan finally get Jimmy involved in Season 5? Has Jamie forgotten that his sister has proof that he murdered Garrett? Has she forgotten that she was going to take away Jamie’s son?