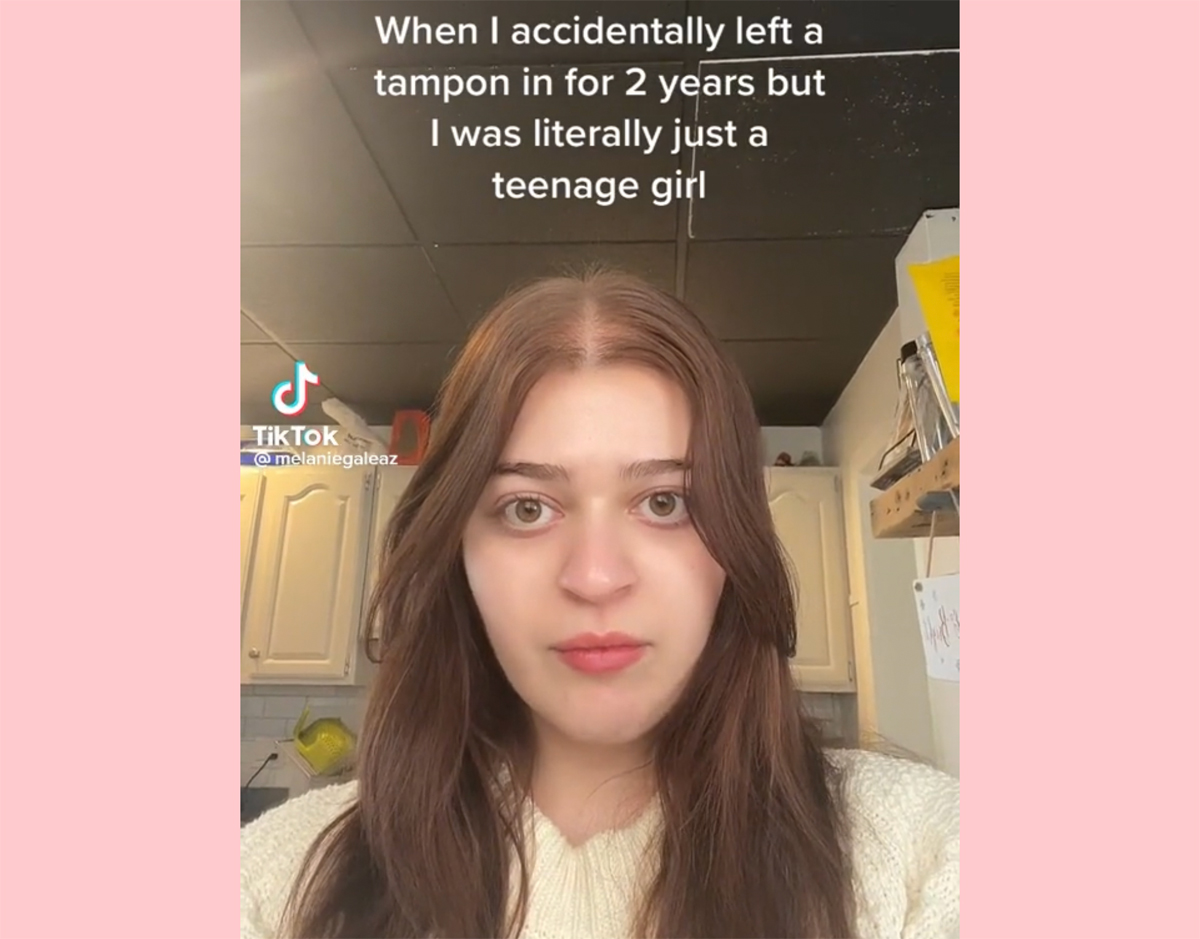 One woman got the shock of her life when she found out all of her health problems were not the result of Lyme disease as doctors said but instead because she accidentally left her tampon in for TWO YEARS!

“’When I accidentally left a tampon in for two years, but I was literally just a teenage girl.”

Related: University Of Idaho Professor SUES TikToker For Accusing Her Of Connection To Murders!

Not my proudest moment #fyp

The brief video quickly gained more than 16.2 million views and thousands of comments from social media users who were stunned and baffled over how she did not get toxic shock syndrome – which is a rare and life-threatening complication of certain bacterial infections, per the Mayo Clinic. People reacted in the comments section, writing:

“YOU’RE MEANT TO CHANGE THEM EVERY 2 HOURS NOT EVERY 2 YEARS.”

“I have so many questions”

“YEARS??? NOT EVEN DAYS NOT MONTHS NOT WEEKS BUT YEARS”

“’How DIDN’T you get toxic shock.”

And of course, one of the biggest questions everyone in the comments section had was how this could have happened. Well, she answered the question in a follow-up post – and the story gets wilder! Melanie explained that the situation began after she started experiencing symptoms of Lyme disease. When she went to the doctors, they just figured Melanie had the condition since she was bitten by a tick as a kid:

However, things soon changed when she began to experience some pain and gynecological issues that she thought were related to Lyme disease:

“Then my sophomore year of high school, I started getting all these pains in my body and some really gross stuff was happening down south. I went to the doctor, but I didn’t really mention the issues happening down south, which I know was my fault. But the doctor was really disregarding me and he was being mean and scary. I was really embarrassed, I was like 14. It was really disgusting and embarrassing, and I just didn’t want to deal with it. But I kind of just hoped that it was something related to Lyme disease and that I could just ignore it with the meds and it would go away.”

She took some more medication for Lyme disease. While her pain went away, her other symptoms remained the same. Two years later, Melanie’s problems never improved – leading her to go to the gynecologist:

“When I get stressed about something, I ignore it, so I don’t have to deal with it until it goes away. [That] never works, especially in this case. I finally go to the doctor again and I went to the gyno. She cranked me open, looks and she gasps. I’m like ‘well, that’s not what you want to hear’. You don’t want to hear someone gasp when they’re looking inside you. Then she says, ‘you have a tampon stuck horizontally under your cervix.”

“Let’s just say taking it out hurt because it was dissolving inside me, so it kept breaking apart and it was such an unpleasant experience.”

Oof! According to Melanie, her doctor had been so stunned by the find. In fact, she didn’t believe Melanie that the tampon was stuck inside of her for two years at first:

“She was like, ‘This was not stuck inside you for two years.’ I’m like, ‘Well, I’ve been having these issues for two years, so I don’t know what to tell you,’ Not believing me is fair. Honestly, I have no proof. Me and the tampon have since parted ways.”

Looking back on the situation, Melanie thinks she never had Lyme disease and all her problems stemmed from the tampon being stuck for years:

“All the pains in my body, it was not Lyme disease. I don’t even think I have Lyme disease… The doctors think I had some sort of infection in my body from the tampon, which makes sense. That was just my body’s reaction.”

“For everyone asking about the smell… I [come] from a family that absolutely would have destroyed me for the smell if it had smelled. It didn’t. At times it did smell very bad, and I was very sad thinking I smelled like that naturally, so I figured out ways to mask it and it did work.”

And if that was not bad enough! Melanie then revealed:

“During that two-year period, I took one out and another came out with it, and I have no idea that one was in for. So I had one in me for two years, one in me for an unknown amount of time, and one in me for like eight hours. That’s the story. Please be nice to me. It was stupid, but I am sensitive. Don’t be mean.”

What a crazy situation!!! Reactions, Perezcious readers? Let us know in the comments below!