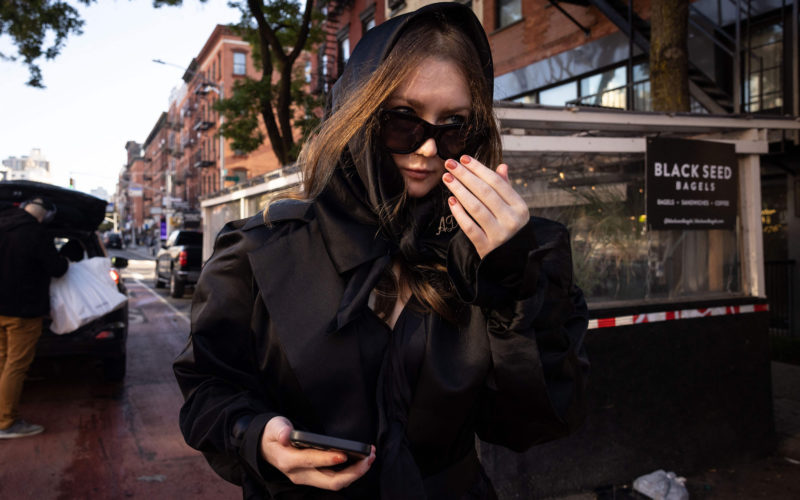 With a comeback tour in full force, it seems the fashion industry is utterly obsessed with Anna Delvey. But why?

Everything I know about Anna Delvey, I have learned against my will. Even still, for some reason, her never-ending saga is nearly impossible to look away from.

Born in Russia, Anna Delvey (née Sorokin) moved to New York City in 2014 and infamously posed as a German heiress. Living in luxury, despite having virtually no money of her own, Delvey worked her way into exclusive circles and effectively scammed the elite, until of course, she got caught. After being released from immigration detention in October 2022, Delvey has transformed from a faux socialite fraudster to a real-life influencer. And, like with all things surrounding her, this aggressive ascension is both hard to ignore and almost too easy to applaud.

For starters, Anna Delvey is nothing if not consistent. Though on strict house arrest, the ex-con is making herself relentlessly visible. She’s secured lengthy features with The Cut, Vogue and The New York Times. She’s been snapped by the paparazzi. Her social media following has sky-rocketed. On TikTok, she’s been aestheticized into an elusive, glamorous style legend with a bejewelled ankle monitor. And if recent coverage is any indication, her career is going better than ever. She’s selling original art. She’s venturing into the NFT business. She’s starting a podcast, writing a book, and perhaps even soon doing a law apprenticeship.

From the books she’s reading, to a tour of her apartment to the outfit she’s wearing to meet her parole officer, it seems like Delvey is everywhere. As fashion publications jump at the chance to secure exclusive interviews and behind-the-scenes shots of her life, there’s an air of inflated importance surrounding her. The overarching message is that this is someone we should be talking about. But why?

Perhaps it’s because her story — and by extension, her personhood — has been hyper-glamourized from the start. In 2018, New York Magazine introduced the world to Delvey via a salacious exposé printed alongside a striking image of the con artist with messy hair and smudged eye makeup; the portrait of a beguiling party girl. And ever since, there’s been a cultural desire to figure out who the real Anna Delvey is.

Netflix’s adaptation of the New York Magazine feature, Inventing Anna, further positioned her as an mysterious, kooky protagonist to a global audience. With this scale of sensationalization, Delvey’s image has been packaged into a consumable product. To some, she embodies a crafty socialite aesthetic. To others, she’s an emblem of the anti-establishment. Across the board, no one can seem to deny her impressive audacity in scamming people so out in the open. By wearing expensive clothes and simply lying about her background, Delvey swindled banks, hotels and actual rich people out of hundreds of thousands of dollars. And that’s kinda remarkable.

The thing is, we all grow up (hopefully) learning right from wrong. Lying, cheating and stealing? Bad. And yet, the ethical lines of Delvey’s scenario have been blurred by the notion that her white-collar crimes — which largely preyed on multi-million dollar companies — were victimless. But in reality, people got hurt, too, like her former best friend Rachel DeLoache Williams, who has spoken out against Netflix’s sympathetic portrayal of the fraudster. Not to mention, Delvey’s inherent privilege as a white woman permits her to glamourize going to prison, while people of colour are disproportionately criminalized without ever being propped up on a public pedestal. Even still, her enduring determination to be front and centre of the zeitgeist has made her something of a pop culture legend.

Ultimately, it’s not that hard to figure out why fashion is obsessed with Anna Delvey. For one, she’s a provocative icon. Time and time again, contentious figureheads are revered not in spite of their polarizing actions, but because of them. On top of that, Delvey dresses like a winner: she wears chic designer outfits, walks around in high heels, and adorns her ankle monitor with bedazzled initials. The act of showing little to no remorse for doing something objectively wrong — all the while looking fabulous — is the type of scandal the fashion industry devours, for better or worse.

Sure, there’s been something undeniably alluring about her brand of blatant criminality. But as her widespread glorification continues, Anna Delvey is being positioned as an icon, or at the very least, someone worth talking about. So I ask: should that really be the case?