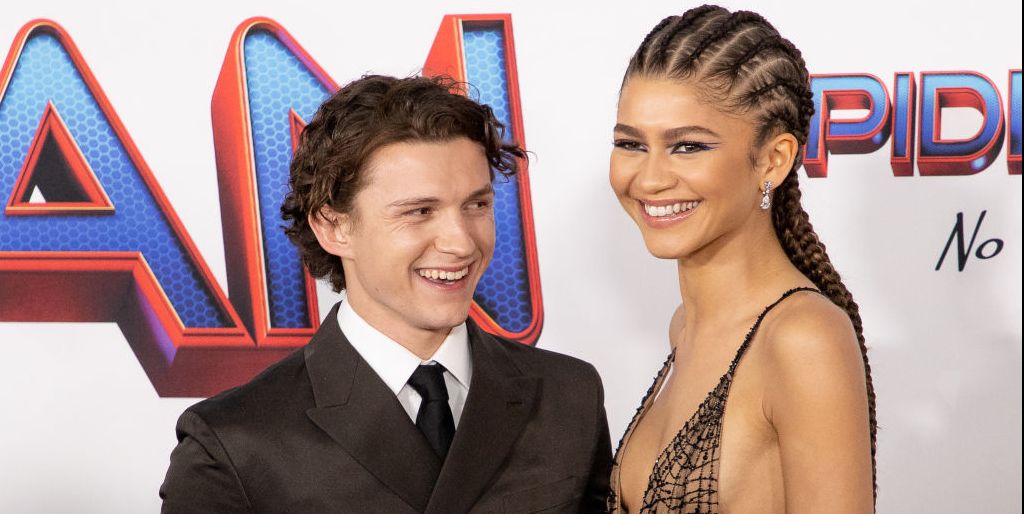 Spider-Man: No Way Home co-stars Zendaya and Tom Holland finally confirmed they are in a romantic relationship after years of off and on rumors that they were dating. They’ve been playing love interests Peter Parker and MJ in the franchise since 2017, but met on set in 2o16. They’ve obviously been close, but it was in July of 2021 that the paparazzi caught them kissing at a stop light, giving those rumors some more legitimacy.

The couple still plays their personal lives very privately, but these are the notable moments in the timeline of their relationship so far.

Holland was the first to post a photo of Zendaya, but soon they were appearing on one another’s Instagram feeds regularly. In July 2016, he shared a pic of them with another friend at the pool, captioned, “Summer Sunday’s.”

Zendaya posted their shared Hollywood Reporter cover just a few months later, writing, “Amidst all the chaos and sadness…this one good thing did happen to me today. Honored to share it with the very best…Spider-Man himself.”

Holland and Zendaya’s chemistry onscreen transferred easily to the red carpet, and photos of them being playful with one another at the San Diego Comic-Con were widely circulated by fans.

In May 2017, they start attending events together, possibly because of promotional opportunities, but photos taken of them show a more personal relationship, like this photo from the MTV Movie and TV Awards.

Throughout the month, they’re frequently photographed together as they promote Spider-Man, but it seems like the easy chemistry of two familiar colleagues.

In July 2017, a source confirms to People magazine that they are together.

“They started seeing each other while they were filming Spider-Man,” the source said. “They’ve been super careful to keep it private and out of the public eye, but they’ve gone on vacations with each other and try and spend as much time as possible with one another.”

A second insider added, “They’re both really ambitious, and they challenge each other—but, most importantly, they make each other crack up. They seem to have a really similar sense of humor and love joking around together. They have great banter back and forth.”

Before the Spider-Man: Homecoming premiere in June, Holland was gushing to People about his friendship with Zendaya, saying, “We are like the best of friends. She’s so great and amazing. I’m a little worried [about dealing with fame … [but] Zendaya is super famous and she’s been through this and I just call her up and say, ‘How do I manage being famous?’ I’m very glad I have a friend like her.”

The pair addressed the dating rumors above by tweeting to one another about the idea they’ve gone on vacation together.

“Wait wait…my favorite is when it says we go on vacations together HA! I haven’t been on a vacation in years! hbu?” Zenday wrote to Holland.

He joked back, “Does the press tour count?”

The next month, Zendaya denied the rumors again in an interview with Variety.

“We are friends,” she said. “He’s a great dude. He’s literally one of my best friends. This past how many months we’ve had to do press tours together. There’s very few people that will understand what that’s like at 20 years old.”

The next month, Zendaya told fans she’d been cheated on in the past and why it left her a bit skeptical about relationships early in life. The actress is currently 25-years-old, so at the time she was just out of her teen years.

“I’m so anti being in a committed relationship when you’re young and people are learning and growing, because when people are young, they make bad decisions sometimes because they don’t know any better,” she explained. “It doesn’t mean they don’t know the difference between right and wrong—it just means that they’re still in the experimental phase in their life where they haven’t made the right decisions yet…it’s very hard to be in a relationship when the both of you are still figuring out life. You cannot change anybody. You cannot make someone grow up faster than they’re supposed to.”

At this point, Holland has met Zendaya’s parents, meeting them at a steakhouse in New York.

In March 2018, the two stars sat together at the Oscars, though they walked the carpet separately. They were seen later that month at a comic book store in Los Angeles.

Zendaya attended the Met Gala, wearing a Joan of Arc-inspired chainmail Versace gown, and Holland posted a photo of her to his Instagram writing, “All hail the queen. Killing it mate.”

The next month, Zendaya posted a video of Holland goofing off with a lightsaber to wish him a happy birthday. She captioned the video: “Happy birthday loser…”

In September, Holland celebrated Zendaya’s birthday with a paparazzi photo from their date at the comic book store and a statue of Spider-Man.

“Me, myself and the birthday girl. Happy birthday mate – keep killing it and paving the way for the rest of us,” he wrote adding a heart. (Seems like he likes calling her “mate” a lot.)

But then a few days later, Skai Jackson’s mother said on Instagram that they are, in fact, a couple.

She then denied she was the commenter using her screen name., “Nothing posted or said was me. I could [sic] care less or know who was dating who. Please stop asking.” Okay then!

Holland and Zendaya begin their Spider-Man: Far From Home press tour, and when Holland posts an Instagram of himself, Zendaya, and co-star Jacob Batalon, he accidentally tags her name in a very suggestive place.

“I’m assuming because you don’t know how to work ig, that’s the reasoning behind my name placement,” she commented with five laughing emojis.

Holland edits the tag and writes, “Thanks @zendaya for making me aware of my obvious blunder.”

Holland shoots down the Zendaya dating rumors again. The actor tells ELLE in an interview that he is single and not romantically involved with anyone. He admits he is “definitely a relationship person. I’m not the fleeting type at all; it’s not my way of life.”

Zendaya is seen with her Euphoria costar Jacob Elordi and they are spotted together on vacation in Greece. Again, Zendaya never confirms she’s dating Elordi, but paparazzi did catch Elordi giving her a kiss in New York City in February 2020. By September of that year, Elordi seems to be dating Kaia Gerber (but they broke up in November 2021.)

Tom Holland appears to go Instagram official with his girlfriend Nadia Parkes, who he was supposedly spending lockdown with in London.

Then, two years after denying they’re a couple, the Spider-Man co-stars were spotted together in Holland’s car sharing a kiss at a red light in LA. They were then seen in the Silver Lake neighborhood the same day, leaving Zendaya’s mother Claire Stoermer’s residence.

Holland and Zendaya are photographed at a friend’s wedding for an Instagram story. In the photo, Zendaya is leaning into Holland and he has his hand on her sleeve in an intimate gesture.

📸 | NEW picture of Tom Holland and Zendaya at a friends wedding tonight most likely in Oakland.

Later that month, Zendaya posts photos of herself on the red carpet for the Venice Film Festival in her Balmain dress, looking stunning. Holland commented with three flame emojis, because she’s definitely looking hot hot hot.

Holland once again posts Zendaya to his timeline, this time with a photo of her on the red carpet for Dune, captioned with a hearts-eye emoji.

A day later, Zendaya was also promoting Dune, this time with co-star Timothée Chalamet. The pair were testing one another’s friendship knowledge for a BuzzFeed video when Chalamet was asked who Zendaya’s biggest crush is.

In an interview with GQ, Tom Holland talks to about relationships and the importance of privacy.

“One of the downsides of our fame is that privacy isn’t really in our control anymore, and a moment that you think is between two people that love each other very much is now a moment that is shared with the entire world,” Holland said.

Zendaya told the outlet something similar, saying, “The equal sentiment [we both share] is just that when you really love and care about somebody, some moments or things, you wish were your own.…I think loving someone is a sacred thing and a special thing and something that you want to deal with and go through and experience and enjoy amongst the two people that love each other.”

During the London photo call for Spider-Man: No Way Home, Holland is interviewed and points to Zendaya, saying, “There she is—looking beautiful, might I add.”

On December 13, the Los Angeles premiere of the film includes this adorable moment when Holland sees Zendaya walk in and gets stopped in his tracks. They do look stunning together on the red carpet, too.

Later that week, Zendaya posted photos of Holland as Spider-Man at two different ages, writing, “My Spider-Man, I’m so proud of you, some things never change and good thing.”

After taking a break from social media over the summer, fans noted Holland’s exploring Instagram again. A fan edit of Zendaya looking fantastic in a million outfits was popular on the algorithm, and it eventually reached her boyfriend. The clip is captioned, “just zendaya owning the camera,” and clearly he agreed because he hit the like button.

Fans noted his “heart” on the images and were thrilled to see he is as in love as ever.

Aimée Lutkin is the weekend editor at ELLE.com. Her writing has appeared in Jezebel, Glamour, Marie Claire and more. Her first book, The Lonely Hunter, will be released by Dial Press in February 2022.