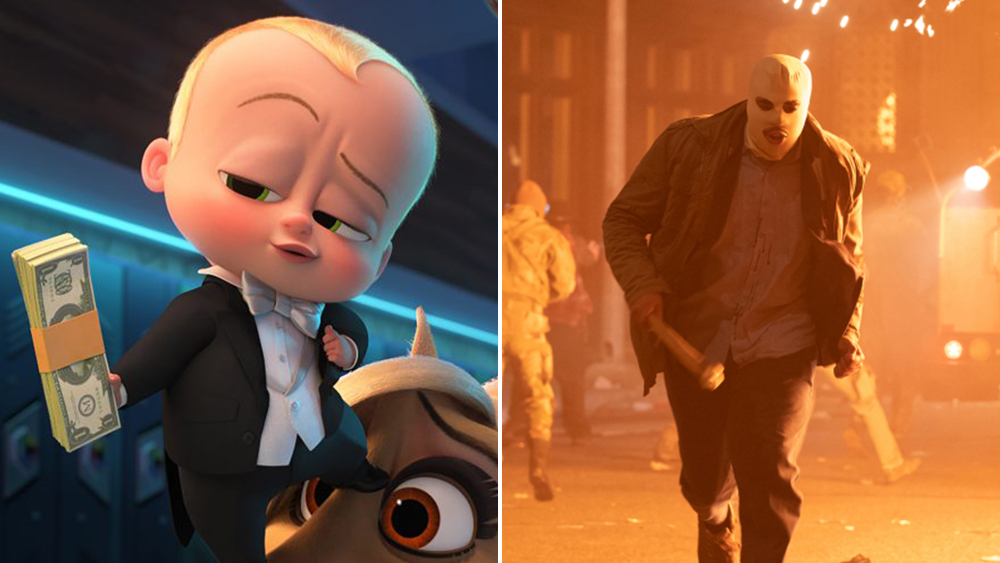 Friday AM Update: Universal had not one, but two wide release previews last night as they head into the four-day Independence Day weekend, with both DreamWorks Animation’s The Boss Baby: Family Business, and Blumhouse’s The Forever Purge grossing $1.3M apiece.

Those looking for more technicality: Boss Baby 2 took in $1.31M at 2,700 theaters from shows which began at 4PM, while Forever Purge grossed $1.33M from 2,550 from shows that started at 7PM. Boss Baby 2 will expand to 3,640 theaters and is eyeing a $15M+ start, while Forever Purge at 3,051 is hoping for at least $10M+ over three days. July 4th will not be a good day at the box office, so looking for a down of a Sunday as people make their way to holiday celebrations, barbeques, etc.

Together with the second weekend of F9, which is looking to make around $28M, Universal will own the top three spots at the box office; a first for a major studio since Sony during Feb. 11-13, 2005 with Hitch, Boogeyman and Are We There Yet?.

Boss Baby 2 was shy of its first installment in regards to Thursday previews with the 2017 installment making $1.5M from 2,700 locations that began at 5PM back on March 30, 2017. That yielded a $15.6M opening day, $50.2M weekend when DWA had their distribution deal with 20th Century Fox. The sequel here is also available on the top two subscriber pay tiers of Uni’s streaming service Peacock, however, those in distribution circles aren’t expecting the service to steal a lot of box office bucks as it’s still nascent. Peacock’s number of subscribers in its entirety for pay and ad-supported subscribers, was at 42M for Q1 2021, up from 33M the previous quarter.

Critics aren’t fans of Boss Baby 2 at 49% on Rotten Tomatoes, but they weren’t fans of the first movie which was blemished at 53% Rotten.

Forever Purge‘s Rotten Tomato score at 50% Rotten is in the same vicinity as its predecessors, though better than the initial Purge (39%). Other RT scores for Purges are Anarchy (57%), Election Year  and First Purge (both 56%).

Comscore called the total weekend for all films last weekend at $98.15M, the highest so far during the pandemic (since mid-March 2020). That was all account of F9‘s record $70M debut during Covid. The expectation is that we’ll finally cross $100M for all films next weekend when Disney/Marvel’s Black Widow enters the cage.