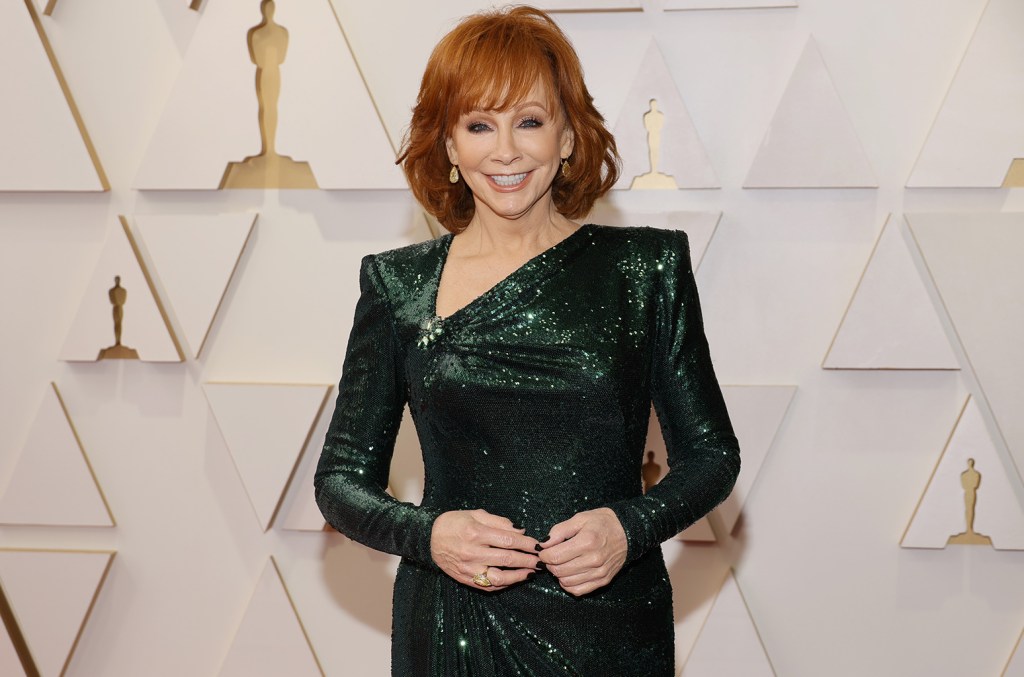 When Reba McEntire announced that she is extending her Reba: Live in Concert Tour into 2023, the slate of 14 new tour dates included one particularly special stop: a headlining gig at New York’s Madison Square Garden, set for April 15. For the multi-faceted entertainer — whose glitzy, cinematic concerts have been drawing audiences for decades — the April show will mark her first headlining show at the storied venue.

McEntire tells Billboard that MSG has been on her bucket list “forever,” and when she plays the venue, she will be carrying on a family tradition. McEntire’s father, steer roper Clark McEntire, was the Professional Rodeo Cowboys Association (PRCA) steer roping world champion in 1957, 1958 and 1961. He also roped at one of Madison Square Garden’s earlier locations.

“My dad roped there in 1946 and ‘47, maybe more years than that,” she says. “And my grandpa [1934 PRCA World Champion steer roper John Wesley McEntire] did, too. I have two pictures in my living room in Nashville of my daddy being there with all the contestants competing at the Madison Square Garden rodeo.”

When the three-time Grammy winner’s concert trek reaches MSG, the openers will be Terri Clark (who is opening McEntire’s current fall 2022 run of shows), as well as gospel group The Isaacs. McEntire and the Isaacs previously recorded a medley of “In The Garden/Wonderful Peace” with McEntire on her Grammy-winning Sing It Now: Songs of Faith & Hope, released in 2017. A 2018 reissue of McEntire’s holiday album My Kind of Christmas also included a collaboration with The Isaacs on “What Child Is This?”

“I’m a huge fan of the Isaacs and have been for a long time,” says McEntire. “And of course Terri Clark, we go way back. Terri, Brad Paisley and I toured one time, so to have Terri back out on tour with me, we call ourselves the ‘90s girls. Females were really big in [country in] the ‘90s and there has been a resurgence of the ‘90s music, so we’re tickled about that.”

In 2021, as many artists were still off the road due to the pandemic, McEntire’s tireless work ethic led her to not only delve back into filming television and movie roles, including a cameo in Barb & Star Go to Vista Del Mar as well as starring and executive-producing the Lifetime movie Christmas in Tune and a recurring role on Young Sheldon, but she also took the opportunity to give many of her classic songs such as “Fancy,” “The Night the Lights Went Out In Georgia” and “Forever Love” a fresh patina. Not content to just spin out a compilation album, McEntire released a three-album Revived Remixed Revisited collection that re-imagined many of her hits, with live performance versions, acoustic-based versions and dance mix versions.

She also released the live gospel CD/DVD project My Chains Are Gone earlier this year (which also featured The Isaacs), and is set to release The Ultimate Christmas Collection on Friday (Oct. 14), with a white vinyl edition releasing Nov. 4. The six-time CMA Award winner says another music project will likely be on the way next year, though, as with Revived Remixed Revisited, it will likely focus on her vast catalog.

“The old music and catalog music is out-selling new music, so we’ll probably do more of like what I did with the Revived Remixed Revisited project,” McEntire says, “just coming up with new ideas for songs that people are familiar with.”

McEntire also recognizes that slipping new music into her concert sets can prove difficult, given the 24 No. 1 Billboard country hits and 60 top 10 country hits she has amassed. “I know at my concerts, people like familiarity,” she explains. “I know one time I went to an Elton John concert and he said, ‘Okay, we’re going to do a new song now if you want to go to the bathroom and come on back in five minutes,’” she says with a chuckle, “because he knows his fans want to hear the songs they can sing along with. But some do want to hear something new, so you have to try to make everybody happy and that’s a constant juggle for us.”

Of course, acting, recording and touring are a few aspects of the business entrepreneur’s ever-expanding empire, which also includes books, a podcast, and lines of clothing and boots. She earned her first movie role in the film Tremors in 1990, and appeared in movies including North and The Little Rascals, as well as a nearly six-year run starring in the hit television series Reba.

Next year will see the release of the Lifetime movie The Hammer, which McEntire both executive produces and stars in, portraying a strong-willed, outspoken attorney who is appointed as judge of the 5th District of Nevada. The story is based upon the story of real-life traveling judge Kim Wanker.

“She’s a strong, tough woman, but also fair. Some of the things of how she would treat folks in her courtroom, I was like, ‘Wow, wish I had done that. I wish more people would do that.’ So it’s very inspirational,” McEntire says.

The Hammer is part of McEntire’s two-movie deal with Lifetime, following last year’s Christmas in Tune. She says there are no set plans yet to extend the deal. “We haven’t talked about that yet. I think they probably want to see how well The Hammer does. The [Christmas] movie did very well and they were pleased with that, and I’ve really enjoyed working with Lifetime.”

Joining McEntire with his own role in The Hammer is McEntire’s boyfriend, actor Rex Linn (or as McEntire affectionately calls him, “Sugar Tot”), who has previously starred in television shows including CSI: Miami. The couple, who appeared together on Young Sheldon, first met back in 1991 on the set of the TV movie The Gambler Returns: The Luck of the Draw, and began dating in 2020.

McEntire and Linn also star together in the new season of Big Sky, which premiered on ABC last month, as they portray Buck and Sunny Barnes, who run the Sunny Day Excursions business in Montana. “When [Big Sky writer and executive producer] Elwood Reid came to me and said, ‘We’d love to have you on Big Sky,’ I said, ‘Doing what?’ And he said, ‘Playing the villain.’ I immediately wanted to do it and Rex was sitting at the table and said, ‘That’s what she’s been waiting for.’ He said, ‘Is that Rex? We want you on this, too.’ It’s so much fun that we are in these together.”

Of course, outside of portraying the revenge-seeking sister in her music video for “The Night the Lights Went Out in Georgia,” McEntire isn’t known for playing many less-than-virtuous roles. She says she pulls inspiration from classic movies featuring actresses such as Bette Davis and Joan Crawford.

“Rex and I went to see [the 1962 film] What Ever Happened to Baby Jane? So when I would film a scene, I would give that look that I can give and Rex would say, ‘Yep, there’s Bette Davis right there.’ Rex loves to go to movies and he studies actors. Last night we watched The Greatest Beer Run Ever and Russell Crowe did a great job in it. We’ve watched Ace Ventura: Pet Detective, [1973’s] Papillon with Steve McQueen and Dustin Hoffman, Cool Hand Luke. We’ll watch all kinds of movies, just to get our creative juices going.”

They also enjoy rehearsing their parts together. “We have coffee every morning and we haven’t missed one since March 2020,” McEntire says. “We get our coffee, whether we’re still up in bed or out on the patio watching the geese on the river. We’ll get our dialogue and rehearse. I think yesterday we rehearsed for like three or four hours.”

McEntire has her sights set on a few other characters she would like to portray. “I would love to be in a Marvel movie,” she says, adding that she doesn’t have a preference on the character. “I’m going to leave it open. I could play a hero or the villain, but I think I’d have more fun being the villain.”

Given McEntire’s Oklahoma raising, her family legacy with roping, her acting resumé (which includes a 2001 stint on Broadway portraying Annie Oakley in Annie, Get Your Gun) and that unmistakable Southern accent, it would seem she would be a natural consideration for a certain smash Western series, Yellowstone. However, McEntire says she hasn’t been approached to appear on the series just yet, though she hopes to change that.

“They haven’t [reached out], but I would love that because I’ve always wanted to be in Westerns,” McEntire says. “I’ve talked to Kevin [Costner] about it. Kevin and Rex are close friends, they’ve worked together. But maybe one of these days, I’d love to be in a Western. I just love a new challenge.”

For now, that new challenge is her upcoming lifestyle book, set to release next year. McEntire published her 1994 best-selling autobiography Reba: My Story, followed in 2015 with Comfort from a Country Quilt. The upcoming book includes recipes drawn from her new Oklahoma restaurant Reba’s Place, never-before-seen photos and a range of lifestyle tips from how to decorate for Christmas, how to pack efficiently for travel, to how to throw the best barbecue party.

With the holiday season around the corner, McEntire says she’s learned that focusing on family and friends —and keeping things comfortable — is key. “I don’t care if it’s food that’s homemade, or you picked it up at your favorite restaurant or bakery, if you pick your favorites, you know guests are going to love it. But if you’ve never tried [a recipe] before, that’s usually not a good time to be experimenting on friends and family,” she says.

“The main thing I’ve learned over the years, is don’t pull out the china. If you have a group coming over it’s not such a big deal that everything’s not clean and perfect. Don’t worry, don’t sweat and don’t be plumb give out by the time your guests get there because you are polishing the silver and making sure the china is good. Get out the paper plates, the Solo cups and enjoy being together.”

With an empire that traverses entertainment, hospitality, retail and literature, McEntire says she has no plans at the moment to expand into new areas.

“I think I’m pretty well happy with what I have,” McEntire says. “If you get to doing too many, you get watered down and you lose out on giving each one of those individual attention. So I’m probably spread as thin as I need to be right now.”