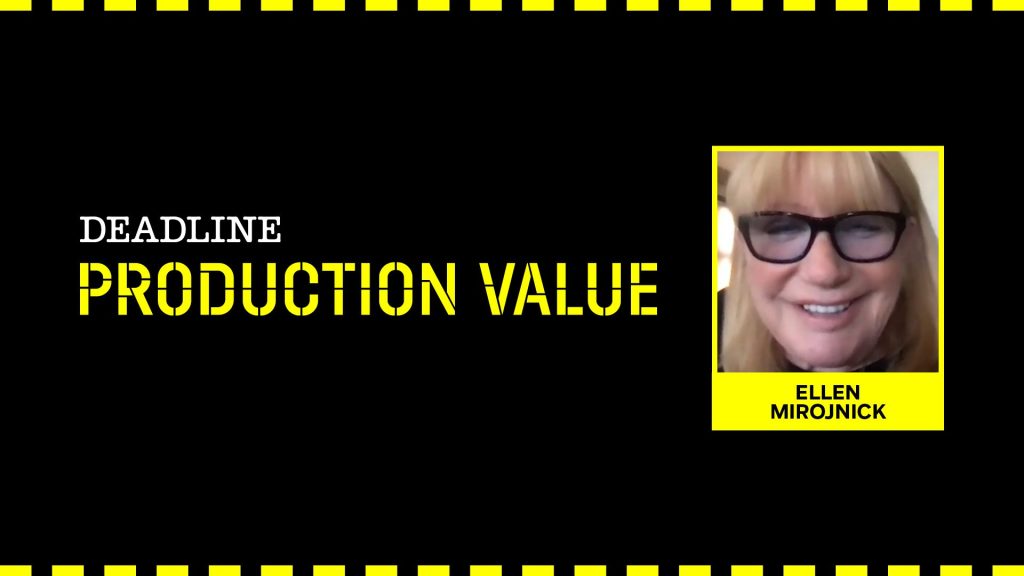 When costume designer Ellen Mirojnick signed on for Bridgerton, she knew she was up against a challenge, the likes of which she’d never encountered.

“It was the biggest thing that I have ever even thought about,” she says, “and it was great fun.”

Chris Van Dusen’s Netflix series, based on a series of novels by Julia Quinn, takes a look at wealth, lust and betrayal in Regency-era England, from the perspective of the powerful Bridgerton family.

Mirojnick came to the series after collaborating with EP Shonda Rhimes on a number of other projects, and based on past experience, she knew Bridgerton wouldn’t be your typical period piece, with standard looks. In keeping with the aesthetic Rhimes has explored throughout her career, it would instead present was an “aspirational” take on the early 19th century—a heightened world of fashion, crafted with incredible attention to detail.

In this week’s episode of Production Value, Mirojnick explains that she couldn’t rely on costume house stock to fulfill Rhimes’ vision. Instead, she had to start up her own “little factory,” which allowed her to create each and every detail of each and every costume from scratch.

After creating a lookbook to get “everybody…on the same page,” as far as the show’s particular mélange of history and fantasy, the designer worked with her team to sort out the logistics of creating 7500 costume pieces “from soup to nuts.” Pieces were fabricated all over the world and flown to Mirojnick’s “costume house,” where she and her team added further layers of detail and got each costume ready for camera.

Interestingly, Mirojnick’s perspective on creating a show’s entire wardrobe from scratch shifted, in her time on Bridgerton. While the notion of doing so once was daunting, going through the process showed her that this level of control over design sometimes makes things easier. “[It’s] really kind of a mystery,” she admits. “But if you have the resources, it’s cost-effective, and it’s easier to actually have everything that you need.”

During her Production Value interview, Mirojnick explained that she fell in love with movies at a very young age and was always creatively engaged, though she initially gravitated toward painting and fine arts. Later, though, she jokes that she was “encouraged to make a living,” and wound up working in fashion.

“I designed junior sportswear for about seven years. At the end of that time, I was a bit bored and wanted to try something new,” she shares. “My husband at the time was working on a film in New Orleans and I went to visit. They didn’t have a costume designer, and voilà. My next career began.”

Though Mirojnick’s career as a costume designer came about through “sheer happenstance,” it quickly became a obsession. The designer spent the early years of her career in New York, cutting her teeth on commercials before finding one of her big breaks, as an assistant costume designer on the iconic 1980 teen drama, Fame. “New York, doing Fame, I don’t know how to explain it,” says Mirojnick. “It was just heaven to me.”

Another heavenly project for the designer was Fatal Attraction, the 1987 psychological thriller, starring Michael Douglas, Glenn Close and Anne Archer, which proved to be her big break. “It was a once-in-a-lifetime experience because it was different than it is now. Everyone [involved] was at the turning point, or a transitional point in their career,” she says. “I was like the newbie. However, we just became an instant family.”

Over the years, the costume designer would go on to design countless other iconic films and series, including Face/Off, Starship Troopers, Logan Lucky and The Knick. Another memorable film for Mirojnick was 1988’s Cocktail, which marked Tom Cruise’s “comeback” effort (“if you can believe it”) following “a couple of not-so-popular films.”

But to this day, one of Mirojnick’s biggest zeitgeist hits is Oliver Stone’s Wall Street. Ever since that film’s release in 1987, that film has endured as a classic, but back in the time of its creation, Michel Douglas’s corporate raider character, Gordon Gekko, proved a standout. What was interesting for Mirojnick, at the time of the film’s release, was that life started imitating art, as filmgoers began to adopt the looks she’d devised for Gekko. The designer learned of this when she got a call from an LA Times fashion reporter, while on the set of Cocktail. “She said to me, ‘How does it feel to influence young men in their 30s, on their way climbing up the ladder? Everyone wants to be Gordon Gekko,’ and I was bowled over,” she remembers. “I was really shocked, and it just continued to grow from there, to the point [that] I think I received an award from some organization about changing the face of men’s fashion.”

At this point, Mirojnick has accomplished more than any costume designer could hope for. (She was already honored, five years ago, with the Costume Designers Guild’s Career Achievement Award.) Nonetheless, there is at least one item on her bucket list that she has yet to cross off. “I want to do a Broadway musical so badly,” she says. “That, I’m dying to do.”

As an artist, Mirojnick is continually driven forward by her quest for the next great story. “I’m always in search,” she says. “My curiosity is enormous. I am always interested in…a great idea for expansion of the imagination…and there’s a lot of great people out there. So, my door is usually always open.”

Upon its December premiere, Bridgerton unseated Wall Street as the biggest pop culture phenomenon Mirojnick has ever been a part of. Ahead of its Season 2 return, the show has already been renewed for Seasons 3 and 4.

Check out our entire conversation with Mirojnick above.