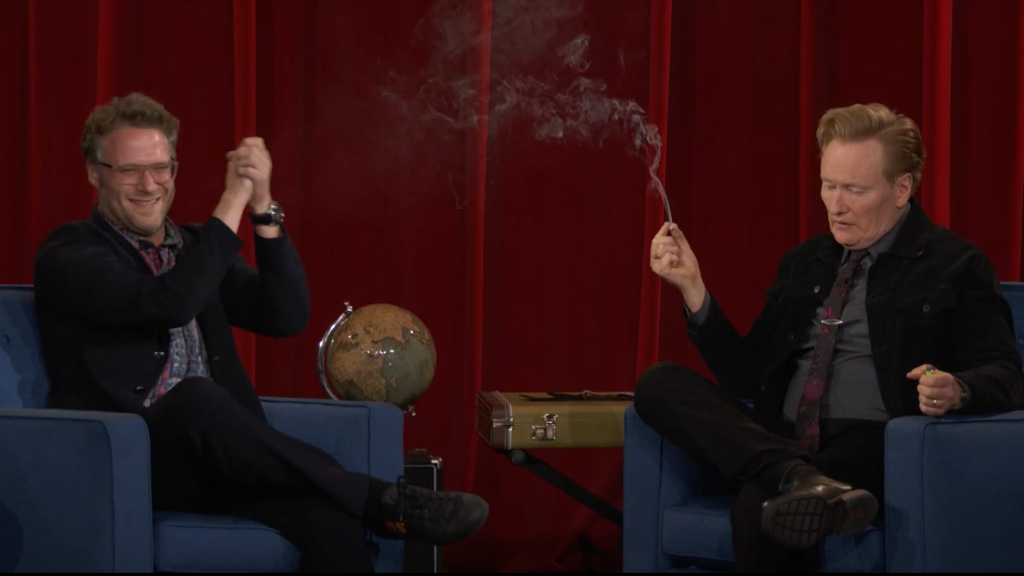 “You seem like a guy who’s relaxed, centered, like you know who you are,” the late-night host observed. “I’m going to have a lot of free time on my hands now for a while. We’re going to start something else up, but I’m going to have some downtime, and honestly—I’m not even kidding—I don’t really know what to do with downtime.”

“Yes, I get that sense from you,” deadpanned Rogen, who quickly arrived at a recommendation, as far as how O’Brien might fill his days.

“I would suggest—this is going to be hilariously on-brand—try smoking a lot of weed for a long time,” he continued.

O’Brien told Rogen that while he considers marijuana to be “a fine herb,” and passes no judgment on those who smoke it, he himself does not usually partake.

“I enjoy my lucidity,” he quipped.

“Never a sentence I’ve even thought in my life,” Rogen responded, with a laugh.

O’Brien then shared that on the few occasions when he has tried smoking pot, “nothing really happened.” The host wondered, though, what Rogen would have him smoke, particularly given that he owns weed company, Houseplant.

Then, Rogen proceeded to pull out a joint.

“I swear to God, this is how lame I am,” said O’Brien. “For a second I thought, ‘He brought a birthday candle?’”

Rogen advised that O’Brien start slow, with one hit of the joint—which he took, before passing it back to Rogen and his co-host Andy Richter.

“This is the kind of thing you do when you know it’s over for you,” O’Brien joked.

After O’Brien took a hit of the joint on the air, Rogen appeared stunned. “I’m so happy with what just happened,” he said. “I wasn’t expecting any of this.”

Rogen’s guest appearance on Conan was one of the TBS show’s last. The show, which premiered in November of 2010, is coming to an end on June 24.

Up next for O’Brien is a weekly variety show he is developing for HBO Max, as part of his new deal with WarnerMedia.

But for now, check out the comedian enjoying his final days with Conan above.