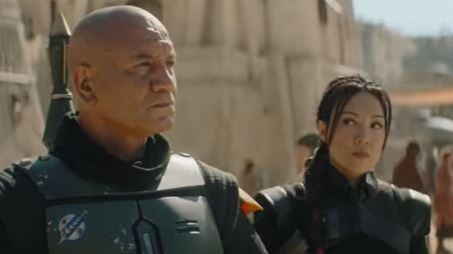 Disney+ has unveiled a new featurette for The Book of Boba Fett, ahead of the Star Wars adventure series’ December 29 debut.

In the piece, actors Temuera Morrison and Ming-Na Wen join filmmakers Dave Filoni, Jon Favreau and Robert Rodriguez to meditate on Boba Fett’s journey throughout the films and television series in the Star Wars franchise, as well as the upcoming “Return of a Legend.”

“Boba Fett was a ‘man with no name’ kind of character, lone gunslinger, when I was a kid,” explains Filoni. “You didn’t know his face. You didn’t know who he was.”

Morrison, who plays the character, says the new series will delve into both “where he’s been and how he’s changing.”

“Jon’s story structure was really brilliant in that it was just overflowing with all things cool,” teases Rodriguez.

“There’s a rawness to everything,” Wen adds with reference to the new series. “That’s what I love about it. I think that’s what gives it its authenticity.”

The Book of Boba Fett was first teased in a surprise end-credit sequence accompanying the Season 2 finale of The Mandalorian. The show will find the legendary bounty hunter and mercenary Fennec Shand (Wen) navigating the galaxy’s underworld, then returning to the sands of Tatooine to stake their claim on the territory once ruled by Jabba the Hutt and his crime syndicate.

John Bartnicki is producing the series, with Filoni, Favreau and Rodriguez exec producing alongside Kathleen Kennedy and Colin Wilson. John Hampian is serving as co-producer, with Karen Gilchrist and Carrie Beck as co-executive producers.

Check out the new Boba Fett featurette above.