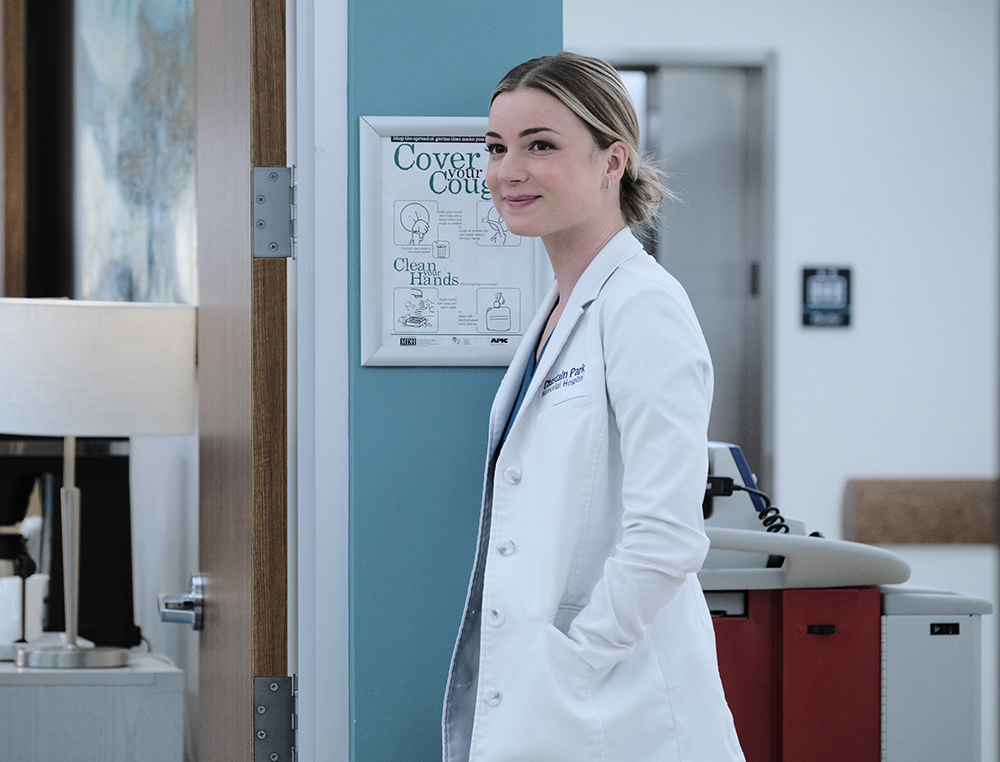 EXCLUSIVE: It was a bittersweet goodbye for Emily VanCamp on Tuesday night’s episode of Fox’s The Resident, as her character Nic Nevin succumbed to her injuries from an automobile accident.

But VanCamp says she made the right decision for her and her growing family, which now includes a daughter, Iris. Yes, there was some overlap between VanCamp’s pregnancy and that of Nic, which helped the actress keep her special little secret quiet until she announced the birth in September—in her own time.

“It was very interesting, mostly because I’m very private about my family life,” she tells Deadline exclusively about being pregnant on the show and in real life. “It allowed us to keep the pregnancy quiet and to have something that’s just ours for a little while. That was beautiful in and of itself—to finally have a little privacy. The timing wasn’t exactly the same, so I was wearing a [prosthetic] belly over my belly. You know, after all the Marvel stuff it was nice to not have to focus so much on all of those things.”

VanCamp has nothing but positive memories from working on the medical drama, and would “absolutely” consider coming back in the future in flashbacks. She teased, “Never say never.”

“It’s such a bittersweet moment for me. I loved doing The Resident so much for the four years I was on it. Oftentimes you hear about someone exiting a show because something bad had happened or there was some bad blood. But in this case, it’s the exact opposite. There’s nothing but love and respect between all of us and this decision was not an easy one for anybody but it was the right one for me, personally. I’m grateful that I was met with understanding and compassion,” she shared.

“We started talking about [my leaving] awhile ago. I spent so many years on network television, but then suddenly priorities shifted. I think there comes a moment in every woman’s life—in every person’s life—where it becomes less about work and more about family, and that’s what happened while I was making the show. Doing that many episodes in a different city and then you add Covid to that, most of us couldn’t see our families for almost a year. It really solidified for me that family is where my heart is at the moment.”

Nic, a nurse at Chastain Park Memorial, was one half of the dynamic duo known as CoNic, a portmanteau for the names Conrad and Nic. Conrad, played by series star and co-executive producer Matt Czuchry, wasn’t ready for a relationship when he was introduced in the series premiere but the bond between him and Nic was impossible to ignore. The duo tied the knot last season and welcomed a daughter together, Gigi.

Czuchry was the first person VanCamp told about her decision to leave the show.

“The beauty of television… We’ve done 70+ episodes together and the audience has had time to see that relationship grow and change,” he tells Deadline. “When reflecting back on it, I hope the audience feels like we gave them everything they could’ve ever wanted. Conrad was constantly there for Nic and vice versa. I hope their journey is something that’s been rewarding for the audience and that we do them justice with episode three and moving forward.”

He added, “I have so many great memories I’ve shared with Emily because we spent so much time together. She and I have such trust and respect for one another. I think we pushed each other. We inspired and supported each other. She wanted to focus on family, and I was the first person she told about that. I just wanted her to be happy. It’s been incredibly rewarding to have a partnership with her.”

VanCamp was not with her castmates shooting episode three because of “circumstances that proved to be challenging,” sharing that it was all done using “movie magic.” Due to the storyline in the episode, VanCamp has not screened it yet. Instead, she celebrates the life of a character who died as she lived—helping others.

“Nic had a very beautiful life. And as tragic as it is the way she goes, her ending is very fitting and representative of the person that she was,” she says. “I’m glad they went that route with the character, she leaves quite the legacy. She’s left a major stamp on my heart. I loved playing Nic and I’m grateful for everything she’s taught me.”

With that end, a new beginning lies ahead for Conrad as a single father grieving the loss of his true love. What can fans expect on that front moving forward?

“Episode four picks up right after everything has happened and we see how Conrad is putting his pain into finding out why the accident happened. He wants answers that make sense,” teases Czuchry. “He’s going back to the crash site in a compulsive way, that’s where he’s putting his pain. The loss was so sudden and so traumatic and he’s trying to wrap his head around answers about why she died.”

“I hope that we stay true to what would be organic to what it’s like to lose the love of your life in a way that’s so shocking,” he adds. “I hope after watching that episode, people know we didn’t pull any punches. It’s heavy and dark and it’s beautiful at the same time. What we all were collectively pushing for in production was to make something that was authentic and honest. When we get to this later chunk of episodes, I hope we see the struggle within Conrad trying to make sense of it all.”

VanCamp knows fans are sad to say goodbye but she asks they keep supporting The Resident, airing Tuesday nights on Fox.

“Please watch. It’s just such a wonderful show with rich characters, and it’s still going to be wonderful without Nic,” she says. “It’s always hard to say goodbye to a character. I remember growing up and watching different shows religiously and when a character would leave that you’ve felt a connection to, it’s hard at first. But you always move past it.”

As for what’s up next for VanCamp, she plans to spend lots of quality time with her growing family. And if Marvel comes knocking for more of Sharon Carter/Agent 13, she wouldn’t say no.

“One thing I’ve learned from working with Marvel all these years is we can never speak on anything,” she shares. “I absolutely love working for Marvel and I love Sharon, she’s so much fun to play. So, we’ll see.”