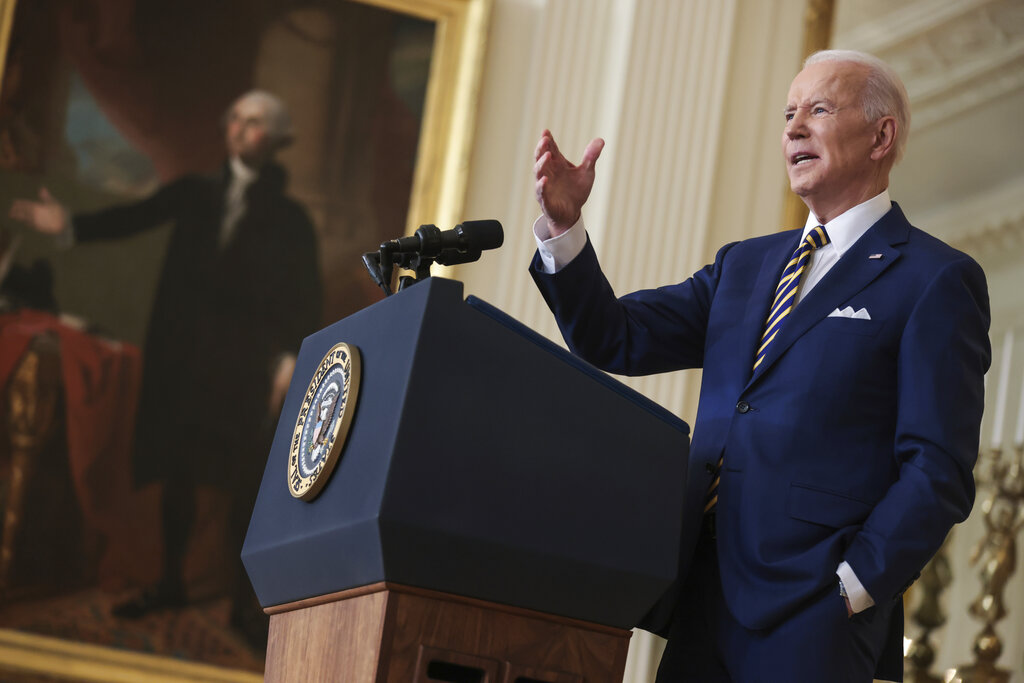 The biggest surprise from Joe Biden’s presidential press conference was its length: At nearly two hours, it was as if he was trying to compete with Donald Trump for making his meetings with the media more like a marathon.

It also affirmed what White House correspondents have long argued, that the fleeting moments of availability Biden tends of give are no match for the traditional press conference. In a less frantic setting, reporters were able to multiple questions and then follow up, not just on what they asked but on the answers that Biden gave to others.

The press conference also gave more of a sense of Biden unscripted, perhaps more of what he really thinks, even if his declaration that “I don’t believe the polls” is a bit of a familiar talking point for politicians when their numbers are sagging. What we saw was a better and more authentic sense of Biden — emphatic on some points, prickly on others, and perhaps a bit too candid on some topics.

You also got a sense of why the White House doesn’t schedule more of these press conferences: Biden had a more simplified, scripted message about his accomplishments, but also was less coherent at other moments.

Biden stopped himself at one point. In talking about the provocations of Vladimir Putin, there was one moment when Biden caught himself as he explained what had to happen for the situation to recede. “There’s room to work if he wants to do that, but I think as usual he is going to … I am not going to go any further.”

Here’s five moments that stood out:

Putin’s provocations: The situation in Russia and Ukraine was one of the dominant topics throughout the press conference, as Biden warned Putin that his country has “never seen the sanctions like the ones I have promised” if Russia invades.

Although he was candid when he said that Russia would enter the country, he talked of NATO disagreement if there was a “minor incursion.”

“It depends on what he does, to what extent we get total unity on the NATO front.”

The set off alarm bells in Ukraine, per CNN, that there would be a difference between an incursion and an invasion.

Later, White House Press Secretary sought to clarify what Biden said, releasing a statement, “President Biden has been clear with the Russian President: If any Russian military forces move across the Ukrainian border, that’s a renewed invasion, and it will be met with a swift, severe, and united response from the United States and our Allies. President Biden also knows from long experience that the Russians have an extensive playbook of aggression short of military action, including cyberattacks and paramilitary tactics. And he affirmed today that those acts of Russian aggression will be met with a decisive, reciprocal, and united response.”

Black voter disappointment: NBC News’ Kristen Welker asked him about her conversations with his supporters in South Carolina, who told her of their disappointment that Biden did not push for voting rights legislation earlier in his term.

The question was one of the more difficult ones posed to Biden, as it is an especially personal issue for him. His 2020 campaign turned around after the endorsement of South Carolina congressman Jim Clyburn and Black voter turnout in that state.

“The fact is that there is a timing that is not of ones own choices,” Biden said. “They are dictated by events that are happening in the country and around the world. He added, though, that “part of the problem is I have not been out in the community nearly enough.”

Biden suggested that to counter new state-level voting restrictions without the passage of federal reforms, the onus would be on Democrats to organize a large turnout come November.

Republican intransigence: Biden said that he has been surprised by the level of Republican opposition, and he tried to make the case that it is different than that experienced by Barack Obama when he served as vice president.

His point: Republicans no longer say what they are for, only what they are against. Otherwise, they are beholden to his predecessor, Donald Trump. “Name me one thing they’re for,” he said.

But he bristled at the idea that his speech on voting rights last week contributed to the polarization, with Republicans contending that he compared them to Bull Connor, the Birmingham segregationist.

When Real Clear Politics’ Philip Wegmann asked Biden, “I know that you dispute the characterization that you called folks that opposed those voting bills as being Bull Connor or George Wallace, but you said that they would be in the same camp…”

“No I didn’t say that. Look at what I said. Go back and read what I said. And tell me if you think I called anyone who voted on the side of the position taken by Bull Connor that they were Bull Connor. That is an interesting reading of English. I am assuming you got into journalism because you like to write.”

Wegmann also asked Biden whether he thought the 2022 elections would be “illegitimate” if some new state voting restrictions remain in place and the proposed federal voting laws do not get passed.

“Imagine if those attempts to say that the count was not legit, you have to recount it and we are going to discard the following votes. I’m not saying it is going to be legit. The increase in the prospect of it being illegitimate is in direct proportion of the prospect of not being able to get these reforms passed. But you are not going to see me, and I don’t think you are going to see the Democratic party, given up on, coming back, assuming that the attempt fails today.”

Fitness for office: Biden quickly dismissed a question from Newsmax’s James Rosen, who cited polls and asked him, “Why do you suppose such large segments of the American electorate have come to harbor such profound concerns about your cognitive fitness?”

“I have no idea,” Biden said. And that was that.

The ‘reset’: So much of the build up to the press conference was on how this would be an opportunity for Biden to “reset,” or chart a future course for the coming year after a rough first one. He tried to do that from the outset by outlining the administrations accomplishments but also addressing the fatigue and frustration over the ongoing pandemic. His message was that there will be a return to normalcy. “We’re not there yet but we will get there.”

Responding to a question from CNN’s Jeff Zeleny, Biden outlined what he plans to do differently, starting with more travel across the country to talk to the public. “I am going to get out of this place more often,” he said. He also plans to seek the advice of more outside experts, even editorial writers. And he said that he would be “deeply involved” in the midterms, including campaigning and fundraising.

What was not said was anything about staff shakeups, something that is pretty common when polls are underwater and criticism is even coming from members of his own party. At this point in Donald Trump’s term, after all, he was on his second chief of staff, second press secretary and fourth communications director. Instead, Biden signaled that the administration’s problem was not so much in the message, but in getting through to voters so they can hear it.