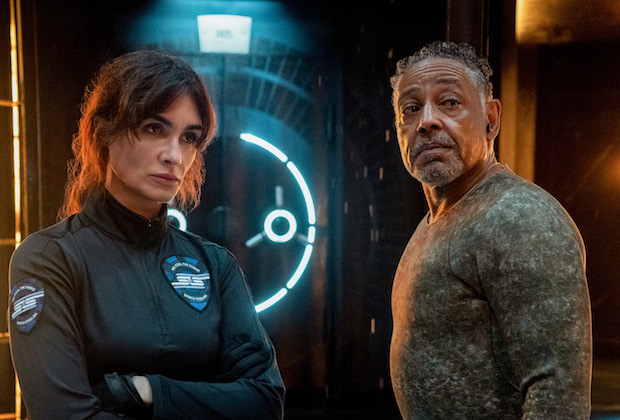 Netflix invites you to give Kaleidoscope a spin on New Year’s Day, by pressing play on an Ocean’s Eleven-like heist drama that unspools its episodes in a different order for each viewer.

Premiering Sunday, Jan. 1, 2023, Kaleidoscope follows a crew of thieves and their attempt to crack an unbreakable vault and seize a massive payday. Loosely inspired by the real-life story where $70 billion in bonds went missing in downtown Manhattan during Hurricane Sandy, the eight-episode series spans decades — from 24 years before the heist to six months after.

Each Netflix user experience begins with an intro asset titled “Black,” after which viewers are served — in a “personal viewing order” — the episodes “Yellow: 6 Weeks Before,” “Green: 7 Years Before,” “Blue: 5 Days Before,” “Violet: 24 Years Before,” “Orange: 3 Weeks Before,” “Red: The Morning After” and “Pink: 6 Months After,” building to the “White: The Heist” finale.

“It was a hell of a show to make,” avows Giancarlo Esposito, who stars as heist architect Ray Vernon aka Leo Pap and thus leads an ensemble that includes Paz Vega (The OA), Tati Gabrielle (Chilling Adventures of Sabrina), Peter Mark Kendall (The Americans), Rosaline Elbay (Qabeel), Jai Courtney (Stateless) and comedian Jordan Mendoza, while Rufus Sewell (The Man in the High Castle) plays the security titan whose company guards the vault. Niousha Noor (Here and Now), Soojeong Son (Servant) and Hemky Madera (Queen of the South) also star.

TVLine spoke with Esposito about what makes Kaleidoscope unique, and where it fell within the ever-omnipresent actor’s very busy 2022.

Esposito in ‘Green: 7 Years Before the Heist’

TVLINE | If you asked me what movie I’ve seen more than any other, The Sting is high up there, and right next to it is Ocean’s Eleven. I just love a heist. I love a caper. I love duplicity, sleight of hand, misdirection… Do you have a favorite heist movie?
You just named one, The Sting, because it’s such a period piece. And the uncut diamonds movie, though it’s not really about a heist, that came out a few years ago….

Everyone loves to try to figure out what the heist is going to be and how it’s going to take place, and when you have an opportunity to do that in a movie, you sort of have just one trajectory. With Kaleidoscope, what turned me on is the idea that the heist just wasn’t one day, one heist, and then you got the cops trying to figure it out, or the heist people trying to get away and fence the money. This took place over a period of time, so the story gets told over a period of time, and you get to see how the heist affected each person who took part in it. And because of the way it’s laid out, you’re able to watch the seven [episodes] and get what really happens, and realize that all these pieces played a big part in solving the puzzle.

TVLINE | When someone watches an Ocean’s Eleven movie, the question is, “How are they going to pull this off?” What questions beyond that does Kaleidoscope invite the person to ask?
It asks what the effect of the event is afterwards. Part of it is, “How are you going to pull it off?,” but then we want to know if those within very oddball group of people are going to get away with it. “Are they going to live happily ever after?” “Are they really going to get the money?” It’s so character-driven, because you get involved with each character, and each character is informed by a dream, something that they hoped would come to fruition by taking a part in this.

Stan (played by Peter Mark Kendall) has an idea what he wants. Leo has an idea what he wants, although he’s faced with all of these other physical things that he’s going to have to deal that he didn’t expect to happen. It’s sort of like, I was thinking, The Italian Job. You’re steeped in the action and then you’re taken to the edge and it’s, “Whoa, wait a minute. What’s going to happen after?” But we have the opportunity to really scratch that itch, to also lay in the characters’ wants and dreams. So for me, I want them to get away. You have the ability to root for all these different characters for different reasons, because you may see yourself in one of them, and that is a tantalizing and very delicious element of our piece.

TVLINE | I hope to God nobody is watching this and seeing themself in Jai Courtney’s Bob.
I hope to God not. [Laughs] I mean, look, some people are loose cannons, and Bob, he happens to be that.

TVLINE | I mean… holy s–t.
“Holy s–t” is right. But I love Bob, and I certainly love Jai Courtney, who plays him. He’s a great human being, and he plays really full and complete characters. But even with Bob, what does Bob want? He really wants love. He really wants respect.

TVLINE | [Googling…] Uncut Gems, that’s the movie you were talking about earlier.
Uncut Gems, yes! Such tragedy. Tragic characters. We have that same tragic kind of feeling [in Kaleidoscope], but even after the eighth [episode], I would venture to feel you’re going to want more. And I don’t know how that’ll ever play out.

I do know that to play this guy as Ray Vernon, and make a switch to being [his alias] Leo Pap, meant a lot to me, because you had a guy who had a dream. A guy who  went straight. A guy who had a family, had a wife, had a kid, and then—

TVLINE | No spoilers! The algorithm has thus far only served me the “Yellow,” “Blue” and “Orange” episodes.
I won’t go any further, but you’re going to see. It’s exciting to have a dream, and I hope that people know when they watch this that the action is informed by what you’re missing in your life, informed by what relationship you did not requite….

TVLINE | My biggest question, a few episodes in — and it is no spoiler — is, “Who the Hell was Walter Salas (played by Rufus Sewell) before he became Walter Salas?” Because it’s clearly a big deal. But I guess I will find out!
You’re going to find out. Walter Salas is very, very connected to Leo, to Ray Vernon. It’s going to be satisfying in the end, because again, the relationship between the two of these guys is going to tell you who Walter is, and why he became that.

TVLINE | What do you think the “random play order” on Netflix does for the viewer? What does that add to the mix?
I think it allows [viewers] not to be in their comfort zone. When we watch things, we kind of have an idea of how it’ll turn out, how it’ll end, what’s going to happen, so I like the idea of being taken out of your comfort zone, because I think that allows you to be more attentive. You’ve got to watch this thing closely, and I imagine you will, because little things happen which you don’t think might be clues, but are.

So, I think the randomized order allows your brain to be purposefully scrambled a bit, so that you’re paying more attention. This is not a show where you’re going to get up and wash the dishes, do other things while you’re watching it. There’s so much to watch.

TVLINE | I was watching the episode which leads right up to the heist, and FBI agent Abassi (played by Niousha Noor) shows up in a different scene. I was like, “Ohhh, I remember her from the first episode….” And next thing you know, there’s a whole episode about her.
Yes, which allows you a way into her world when you’ve only seen a piece of her. And it’s great that you do, because then you’re steeped in her life and her story for a half a beat. It gets your attention.

TVLINE | You’re a person who always has several irons in the fire. But looking back at the past year, between the things that came out and the projects you were working on, is 2022 about as busy as it gets for you? There was Better Call Saul‘s final season, The Boys, a bit in Harley Quinn and now Kaleidoscope, all while you were probably filming some of The Mandalorian, Godfather of Harlem….
2022 was one of the busiest years, I have to say. And going in 2023, I haven’t finished yet. I’m a part of The Gentlemen [TV spinoff] with Guy Ritchie, which is a wonderful thing to be a part of. And I’ve been over in London working on an undisclosed project which you’ll hear about soon as well. But to give you an example, I was thinking, “God, if this wasn’t Matt [calling] today, why am I on the phone when I just got off a plane after having not been home for a year?” It’s been basically a year since I stepped into my home, which I just got into 20 minutes ago.

TVLINE | Wow…
So, it’s as good as it gets, as busy as it gets, but I have to say, I am in a creative wave. I mean, I know for you and for audiences, they go, “Man, this guy doesn’t stop working,” but I’ve had the opportunity to be in quality projects where I was not able to say no. Everything that I read, everything that I’m doing, I felt passionately about, especially Kaleidoscope. I went, “Wow, I see the challenges, I see the creative elements that are going to allow me to soar.” I see the showrunner/writer, who I just felt had just such a great amount of talent, in Eric Garcia. I see the different directors who are bringing a different approach to each episode, which allowed me to think, “OK, I’m making little movies every single week.”

The same goes for Chris Brancato, who does Godfather of Harlem with the wonderful Forest Whitaker. Playing Adam Clayton Powell Jr. has been the lightness of my life, because I’ve played so many guys who were close to the vest. Even Stan Edgar [on The Boys], he’s a different kind of “company man,” connected to the roots of Germany and using everybody in a certain way. That was a whole different character for me to step into. But then I get to be able to play a guy [on Godfather of Harlem] who is a consummate orator and preacher, but also a ladies’ man and drinker. He’s a guy who’s fun, and a guy who has a moral compass. He never gave into Bumpy Johnson, and never did anything illegal with Bumpy, because he really stood up for the people and helped people. So, to tell a part of history of a human being who really lived, and allow people a way into that history, really, really enthused me this year.

So, this has been a bang-up year, and it’s really wonderful to have the opportunity to have so many people be appreciative, and watch, and check it out. That, to me, is a special thing.

Want scoop on any of the above shows? Email InsideLine@tvline.com and your question may be answered via Matt’s Inside Line.