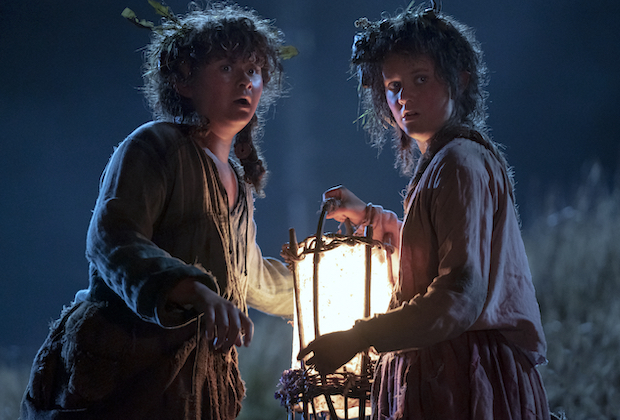 Nori and Poppy, The Lord of the Rings: The Rings of Power’s dynamic Harfoot duo, were best friends who stuck by each other no matter what. That’s why it was so surprising in the Season 1 finale when Poppy stayed with their caravan cohorts rather than join Nori and the Stranger on their new adventure in search of that constellation from Sadoc’s map.

“I was also surprised as a person reading it in the script,” Markella Kavenagh, who plays Nori, tells TVLine.

“They’ve been such an integral part of each other’s lives for so long that maybe they need to do their own thing for a bit. It’s important for growth and to know that they’ll always be there, and they’ll always have each other’s back. But they also need to really own who they are as individuals and have their own sense of autonomy for a bit. It’s sad, but it’s also life.”

Elrond and Durin also saw their decades-long bond tested this season, with the former reaching out to the dwarven prince for help in saving his dying people by mining mithril — a precious ore that was dangerous to retrieve. King Durin III — who was suspicious of the elves — shot down their digging efforts, and it seemed like all hope was lost. But in the end, Elrond left Khazad-dûm with a small piece of the game-changing material, thanks to an off-screen gesture from his bearded friend.

“We actually did shoot the scene where I hand it to him quickly without my father knowing, so that there is a glimmer of hope for Middle-earth,” Owain Arthur, who plays Prince Durin IV, shares. “I like that Durin still went against his father for his friend. He followed his heart [and] did what he thought he needed to do.”

According to the actor, this subtle act has solidified Durin’s friendship with Elrond moving forward, and this might not be the last time we see them together. “We had a little bit of a tiff at the beginning, but that made us even stronger…. and we’ve recovered from that. The fact that Elrond is now banished from Khazad-dûm doesn’t mean that I’m held captive in Khazad-dûm, so I think he will be able to go and see him at some point.”

Another thing to look forward to when Rings of Power eventually returns for Season 2  is how the wood elf Arondir will handle starting a new life with his paramour Bronwyn and her son Theo, who are both human. In Episode 7, we learned that the trio — along with the rest of the Southlanders — were headed to Pelargir, an old Númenórean colony with fresh land for them to live on.

“We’re always talking about elves and human relationships and humans as babies in the eyes of elves, but I think it’s reversed with him entering a more human dynamic,” Ismael Cruz Córdova, who plays Arondir, notes. “He is a baby in terms of knowing how to be domestic and how to be a dad or a boyfriend.”

With this new life among the humans comes the internal conflict of which side he lands on if he’s ever forced to choose. Does he side with the elves or the humans? “That’s the meat of the conflict of this guy,” Córdova adds. “At the end of the day, he’s an eternal being. He’s going to outlive humans in one way or another. He’s chosen to go with the humans right now, but if he gets called upon, will he choose his family or his people?”