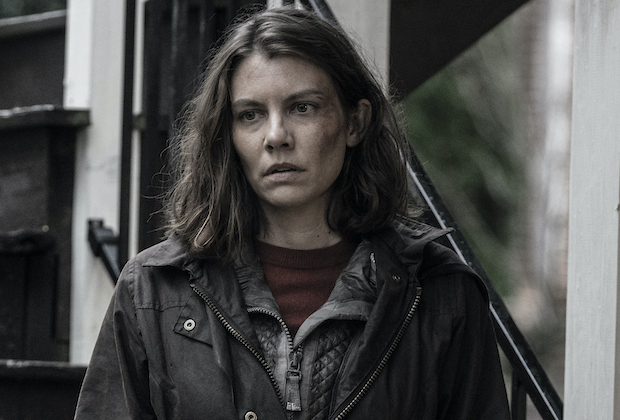 Warning: The following contains spoilers for the Season 11 and series finale of The Walking Dead. If you haven’t watched yet, guaranteed — you want to do that before reading further.

Sunday’s series finale of The Walking Dead (read recap here) left us with a lot of feelings. Surprise (a glimpse of Rick and Michonne!). Happiness (Judith, Jerry and Dog lived!). Sadness (R.I.P., Rosita!). Even ambivalence (so no “Donnie” after all, huh?). But it also left us with a ton of questions. Here to answer some of them for TVLine is showrunner Angela Kang.

TVLINE | Was it always the plan to have Rick and Michonne make a surprise appearance in the finale, or did that come after their limited series was announced?
From the first pitch about the end of the season, I put my wish list out to the universe and AMC and all the producers, and said that the show was not complete without bringing back Rick and Michonne in some way. I know that that’s not entirely up to me, there’s a lot of stuff that needs to be worked out, but that was my wish. And then it took many, many, many months for it to actually come together. For a while, I was like, “I don’t think we’re getting them.”

TVLINE | I suspect fans are gonna be pretty happy that you got them.
It makes me happy, too!

TVLINE | How did you arrive at Rosita being the big death in the finale?
Christian Serratos volunteered! I was talking to her about our plans for the finale, and I kinda made a joke about blah, blah, blah deaths — unless people want to volunteer. And she was like, “Are you open to the idea of maybe Rosita dying at the end?” Then she laid out a really passionate argument for how she felt that was the right choice for her character’s story, how bravely she would do anything for her child. So she told me to think about it. I did, then I talked to the writers and the network and Scott [M. Gimple, the franchise’s chief content officer] and said, “I think we can do a really beautiful version with Christian.” So it started with her.

TVLINE | I know Luke and Jules bit the dust, too, but… was there any temptation to go bigger and have more characters die in the finale?
We talked about every iteration of it. In some ways, doing more carnage makes each individual death seem less meaningful. Also, this is a story that in the source, the leads die. It’s sort of about how that cycle of life ends, and then the next generation is left, right? So I was like, “If you’re really going to be taking all these other figures off the table, I don’t know that you even get the same impact from killing someone who is further down the tier.” Rosita sort of gives you that, symbolically.

TVLINE | I was a little surprised that Annie survived. I thought her death might spark a little bit of compassion for Negan in Maggie, whether or not he deserves it.
For Annie, we were actually always thinking that she would be alive to leave [her and their unborn baby as] a possibility for Negan for the future. We just thought there was something interesting about him having had this marriage. But that’s for the next show to deal with!

TVLINE | You and I have talked a lot about Daryl and Connie, and you kept telling me that I wasn’t crazy to think there was a vibe there. But we didn’t even get a kiss in the end!
There is a vibe. But it felt like they were sort of ships that passed in the night, ultimately. The story that we intended with Connie sort of shifted when [Lauren Ridloff] went to do a Marvel movie, to be honest. This was a while back. Sometimes, when things like that happen, the path shifts. So we might have actually leaned into that a little more if she wasn’t missing for a big chunk of the story.

TVLINE | Was the original plan for Carol to leave with Daryl when he set off in search of Rick and Michonne?
Yeah, that was the original plan until a couple months before we shot it. [Ed. note: Melissa McBride was initially set to star with Norman Reedus in a Daryl/Carol spinoff; in late April, the news broke that she would not be a part of the series.]

TVLINE | Were you disappointed that the spinoffs were announced at the time they were? It kind of messed up what should have been some really suspenseful moments, like… would Carol go off the cliff? Would Negan be executed?
Yeah. I don’t want to get myself in trouble. [Laughs] It was definitely on a creative level sort of challenging, because when things are announced is not really in the hands of the actors or producers or whatever. That’s more the studio having to make announcements for their own timing reasons. We tend to get a very short heads up before it happens. It was upsetting to the actors, and we were like, “Argh, some of our stories, with the assumption that this stuff would not be spoiled, play totally different now.” But we just make the best of it and hope that the emotional stakes still carry no matter what.