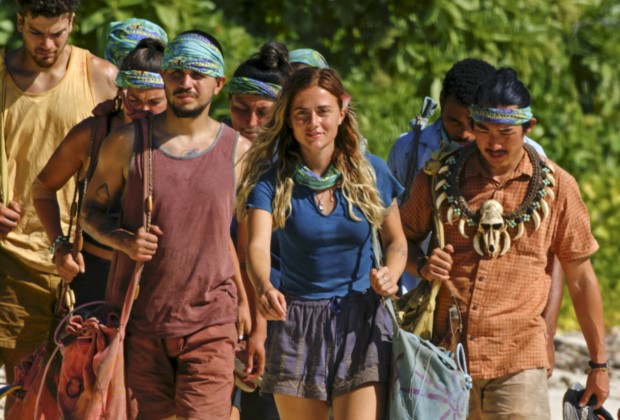 It took a whopping nine episodes of gameplay, but the season’s very first advantage has finally entered the equation.

Let’s be honest. Compared to the two seasons before it, Survivor 43 has been tame. Contestants have not only been conservative strategically, but they’ve also been extremely gun-shy about using the plethora of idols and advantages they’ve accumulated thus far. That all changed Wednesday when Noelle put her Steal-a-Vote advantage to good use in what could arguably be called the season’s biggest and boldest move yet. In a clever ploy to keep James comfortable, she stole Owen’s vote as a smoke screen before ultimately slitting James’ throat.

Though I wrestle with whether it was a move worth writing home about or simply the biggest move of this particular season, credit is still certainly due. I want to hear all of your thoughts on Noelle’s sneaky play, but first, let’s recap!

Sami is bummed that the group went with the “easy vote” of voting Jeanine out. He’s ready to shake things up, and wants help from Owen to do so. But Owen is peeved that James repeatedly lied to his face. “You’re not the Godfather, dude,” he says in an interview. “He’s driving me insane and it’s time to vote him out.” James offers to have a chat to smooth things over, but Owen ain’t having it. The lines are drawn!

IMMUNITY IS BACK UP FOR GRABS | Jeff greets the tribe (in a strange… British accent? Sure.) and reveals they’ll be split into two groups. Two immunities will be awarded, and two people are going home! In addition, the last person left in the endurance battle wins PB&J for his or her team.

For the challenge, players must pull up on to a lever that clamps a ball in the device above their head. When their ball drops, they’re out. Jesse and Cassidy are first out, leaving the red team with just three players, while Noelle drops for blue shortly after. When just a few players remain, Gabler cheers on the “big boys,” prompting Karla to ask with a smile, “What about the big girls, huh?” This woman is fighting through this challenge with a broken finger, and then beats Sami to win immunity! (She’s quickly become one of my favorites to root for. Any other Karla fans in the house?)

When all is said and done, the red team wins the food reward and Cody wins the other immunity. With that, Jeff tells them the groups will be separated until Tribal Council.

RED TEAM | Ryan and Gabler start scheming, and they want Cass out. With numbers limited and Cody immune, Ryan thinks its the best time to turn against his former tribe and break Coco up. (I don’t quite understand the need to go against your OG tribe, or how that argument would help you in a Final 3, but Ryan seems convinced it’s the way to go.) Jesse and Cassidy, however, want to target Ryan, which makes Cody the one true swing vote.

BLUE TEAM | Karla, Noelle and Sami set their sights on Owen, but they want to make him feel comfortable so he doesn’t use his Shot in the Dark (remember that ol’ thing?). James tries to talk to Owen, but they just end up bickering like an old married couple. James tries to pretend he doesn’t know who he’s voting for, which infuriates Owen who clearly wasn’t born yesterday. James can’t get over the fact that Owen wrote his name down at two previous Tribals, which seems a little petty, right? (It’s a game, dude. You got votes. Deal with it.)

Noelle enacts a Hail Mary plan to try and save Owen. She tells James she’s going to use her Steal-a-Vote on Owen, but really she’s just trying to make him feel comfortable so he doesn’t use his Knowledge Is Power advantage. Sami’s down to clown, but he wants Karla on board too, only she’s resistant to the idea of cutting one of her numbers.

TRIBAL COUNCIL NO. 1 | The beef between Owen and James is obviously the topic of conversation, and as the two guys fill Jeff in, Sami is whispering to Karla, asking which way she wants to go. While things seem up in the air, Noelle does what she intended to do and uses her Steal-a-Vote on Owen, which brings the brightest of smiles to James’ face. When Jeff reads the votes, that smile is promptly wiped off his face, as James and his advantage are voted out of the game. He says he takes it as a sign of respect, but the guy’s body language reads salty af. Can’t blame him!

TRIBAL COUNCIL NO. 2 | As the second group enters Tribal, Jesse is shook that James is sitting on the jury bench with Jeanine. As Cassidy talks about the pressure of being back in a small tribe, she just has to bring up the elusive “monster,” who wants two heads for the price of one tonight. (Did Probst pay her off to bring up that elaborate, ridiculous analogy again?) Ryan says he’s carrying around 30 pounds of clams on his person and if he’s voted out he’s… taking them to Ponderosa? (OK, that’s a whole new level of petty, but I kind of like it?) Jeff reads the second batch of votes, and Ryan (plus his seafood buffet) becomes the night’s second victim.

Now it’s your turn! Who are you rooting for and what did you think of Noelle’s move? Drop your thoughts in a comment.