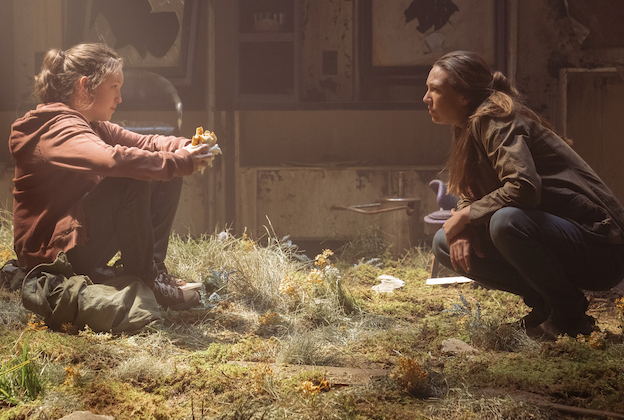 In case you’re keeping score at home, we’re only two episodes in, and we’ve already got a The Last of Us body count started. Joel: 0, the Mushrooms From Hell: 1.

Tess sacrifices herself in this week’s hour, in a bid to give Joel and Ellie a fighting chance of making it out of the State House alive after a horde of infected swarm the place. Let’s recap Episode 2’s highlights.

‘BOMB THIS CITY’ | This week’s episode starts in Jakarta, Indonesia, on Sept. 24, 2003 — two days before everything went sideways in the United States, as we witnessed in the premiere. A mycology professor (aka someone who studies fungi) is brought to a lab to examine a specimen; she identifies it as Ophiocordiceps but scoffs when told it was taken from a human, because the fungi is not supposed to be able to survive in people. She dons a hazmat suit and goes to see the dead woman from whom the specimen was collected. The corpse has a bullet hole in its head and a (human) bite on its leg; when the professor slices into the wound, spongy material starts to extrude from it. What’s worse: In the cadaver’s mouth, there are thready tentacle-type structures that move of their own accord.

The professor is horrified, then mystified when she learns that the bite happened 30 hours before at a flour and grain factory in the city. The bitten woman suddenly turned violent and bit three of her workers; all of them had to be killed. The original biter is on the loose, and 14 people are missing. The military asks the professor for help making a vaccine or medicine to treat the infected. She’s very grave as she informs them that there’s nothing they can do but “bomb. Bomb this city and everyone in it.” She starts crying, then asks for someone to drive her home so she can be with her family.

GETTING TO KNOW YOU | In Boston, as Joel, Tess and Ellie rest a bit, Joel gives the teen the stinkeye. He’s convinced she’s going to wind up full-blown infected, sooner or later. Tess talks him out of returning her to the QZ, where they’ll just scan and kill her, but she also demands to know what Ellie was doing with Marlene and why she’s so important. Reluctantly, Ellie tells them that she’s bound for a Firefly basecamp somewhere out West, where doctors are working on a cure. Joel thinks this is a load of hooey, but Tess says it doesn’t matter: If they get her where she’s headed, “we get what we want.” He grumpily agrees. Ellie starts twitching, pretending to be infected, before Tess shuts down her shenanigans. I LIKE this kid!

The trio picks its way through the ruins of Boston, which was bombed in an attempt to stem the outbreak; apparently it was more effective there than in many other big cities. As they climb over cars and such, Ellie tells her traveling companions how old she is (14) and how she got bit (she snuck into a boarded-up mall in the QZ, and it happened there). She also mentions that she’s an orphan.

She’s also super chatty, and she can’t get over how the world outside the QZ isn’t as immediately dangerous as she’d heard. “So there aren’t superinfected that explode fungus spores on you?” she wonders. “Or ones with split-open heads that see in the dark like bats?” It should be noted: The adults exchange a look on that last one.

CLICKER? I BARELY KNOW ‘ER! | Their quest takes them inside a flooded hotel, where they climb to a high floor in order to get the lay of the land. The bad news: There are a LOT of infected roaming the city, way more than the last time Joel and Tess passed through. We learn that infected are connected, and the fungus also grows underground. Therefore, if you step on a patch of Cordyceps in one place, you can wake a throng of infected somewhere else.

So the only path that might work is through the Bostonian Museum, a building that has been completely overtaken by the fungus. But Joel determines that the organic matter growing out of every window and crack is dry, which could mean all the infected inside are dead. So they go inside, guns and flashlights drawn, with Tess and Joel telling Ellie to keep quiet.

That advice proves moot when the building starts collapsing around them, which summons a very terrible-looking infected that sounds like a creaky, alien, baby bird and looks like a mushroom-ified Venus fly trap. This is a stage of infection known as a “clicker,” aka the bat-like creatures Ellie referred to earlier, and it is SO strong and SO SO fast.

The clicker and some of its friends pursue the trio in a super tense and very scary sequence through the museum. When they’re done, Ellie’s been bit again on the arm and Tess’ ankle is twisted, but it seems like they weathered it well enough. Joel grumbles that maybe Ellie’s second bite will be the one that takes, but Tess admonishes him to accept a little good news for once.

BLAZE OF GORY | Eventually, they make it to the State House… where the truck outside is empty and there’s blood on the steps. Inside? Dead bodies everywhere. Ellie wonders if FEDRA is responsible, but Joel looks at the state of the corpses and surmises that someone got bit. “The healthy ones fought the sick ones. Everyone lost.”

Joel wants to return to the QZ, but Tess is adamant that they not turn back. “Our luck had to run out sooner or later,” she says sadly, and that drops the penny for Ellie. “F—k,” she realizes, “she’s infected.” Yep, Tess got bit on the neck during the museum skirmish; meanwhile, Ellie’s nip is already healing.

Tess instructs Joel to take the girl to see two men named Bill and Frank. He protests that they won’t accept her, but Tess says he’ll convince them. “I never asked you for anything,” she adds, desperately. If he can keep Ellie alive, “you set everything right, all the s—t we did,” she says. As all of this is playing out in really sad fashion right there in the lobby, one of the corpses starts moving and Joel shoots it. Then he notices that some of the connected tendrils are moving; outside, a pack of infected reanimates and starts moving toward the State House’s front doors.

“Joel, save who you can save,” Tess whispers, knocking over gas cannisters and spilling grenades onto the floor. Anguished, Joel grabs Ellie and pulls her away, getting out of the building before the horde arrives. The infected quickly advance on Tess, who fumbles with a lighter that just doesn’t want to spark. As one infected puts his tendrilly mouth on hers (ICK ICK ICK), she finally gets the lighter to work. She drops it on the floor, where it catches the gas; a huge explosion and flames follow.

As Joel turns and walks away, Ellie pauses a moment to watch the building burn.