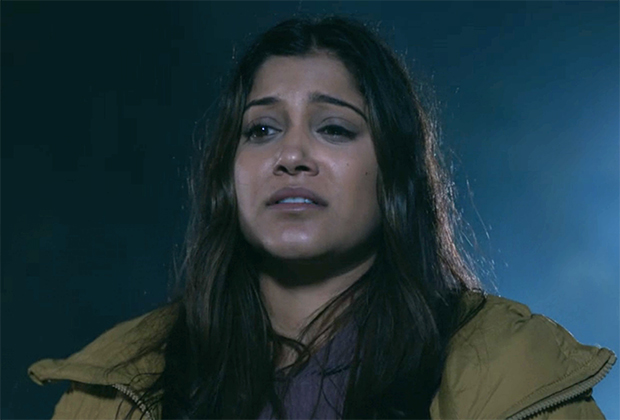 The Resident delivered a cliffhanger of the most literal variety in its Dec. 6 fall finale, as new mom Padma contemplated taking her own life while in the throes of postpartum depression.

Naturally, series co-creator Amy Holden Jones can’t say exactly what will happen when the Fox drama returns on Jan. 3 (8/7c). But after the show left Padma poised to potentially jump off a bridge, Jones offers insight as to why Padma’s suicide attempt felt like an understandable choice for the character.

“What fascinates me is the idea of someone who gets into a pregnancy without really understanding it, who has never had those kinds of responsibilities, and then, lo and behold, has twins without a partner and gets overwhelmed. That’s a growing-up event, you know?” the EP shares with TVLine. “And the fact that it’s causing an emotional break is something very believable to me. She doesn’t have the skill set to deal with these kinds of overwhelming things.”

Even more jarring for Padma, Jones says, was the expectation that she might be a “flower-child, lovely, easygoing mom” upon giving birth, considering her work as a yoga instructor and previously carefree approach to life. But “it didn’t work out the way she thought it would, and that’s another interesting journey,” she continues. “There is no journey if people don’t have internal as well as external obstacles to face, so now there’s this obstacle.”

And there are positive indications that Padma will survive her current ordeal when Season 6 resumes, if only because Jones teases Padma’s down-the-road relationship with Raptor — and it might surprise you to know that a romantic future is likely off the table for the pair.

“We debated early on if she could end up with Raptor, and we decided no, that was not where we wanted to go,” Jones divulges. “We can now have a very complicated, interesting situation where people are co-parenting who are not really lovers. What does that look like? How do people cope? It’s a good question, and an interesting area for drama.”

Of course, per Jones, “it’s possible” that a romance between Padma and Raptor could eventually feel right. But “as we built their scenes, it seemed like such a wonderful world to create a dear friendship, a really close friendship that we wanted to see. So we went that way instead,” she says, adding that it’s been a challenge to find Raptor a suitable romantic partner since Shaunette Renée Wilson’s Mina left the show in Season 4.

“Unfortunately, Mina’s quite difficult to replace, both for him emotionally and for me emotionally,” Jones admits with a laugh. “I had absolutely no desire to see her go. That was really painful. But there will be an answer, for sure. It’s also possible the love of [Raptor’s] life will be his sons.”

If you’re thinking about suicide, are worried about a friend or loved one, or would like emotional support, dial “988” for the National Suicide & Crisis Lifeline.