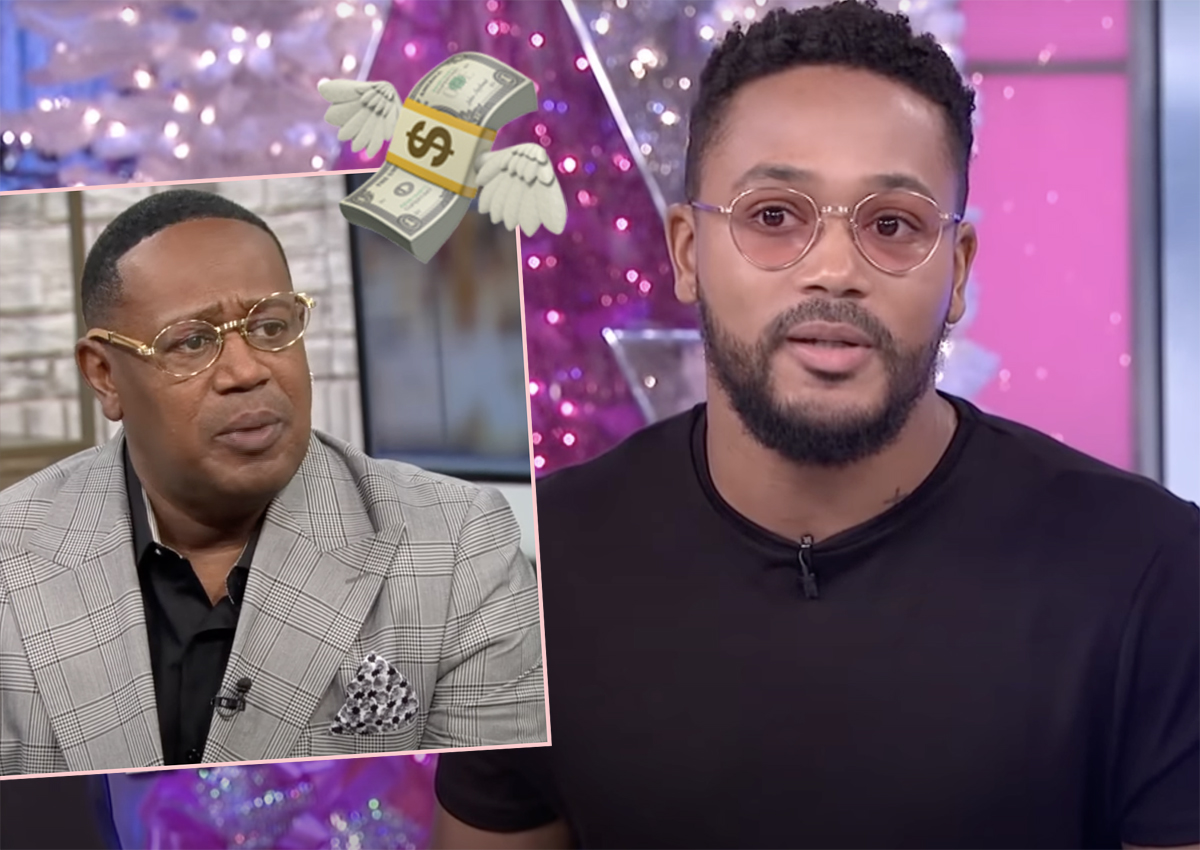 The former child rapper, who goes by his full name Romeo Miller now, took to Instagram on Sunday to deliver a long poem about his current living situation. In the poem, which he called “The Tree of Trauma,” Romeo gets introspective about life. And while he didn’t outright say his dad was responsible for some financial challenges in the Miller family, the ensuing back-and-forth pretty much cleared that confusion up…

This is a CRAZY one with lots of twists and turns, y’all. Buckle up!!!

Romeo started the controversy with Sunday’s IG poem, in which he artistically aired out a few of his family grievances. At one point, he wrote:

The rapper was far from done there, though.

In another stanza of the poem, Romeo appeared to blame his father — whose real name is Percy Miller — for an obsession with public image over the behind-the-scenes health and well-being of the Miller family:

“Why is being right to strangers so much more important than being vulnerable at home? Why is it that I’m soaring and my siblings are not? Probably because our father didn’t give them the same time on the clock. Chase the money or chase the family? You can’t do both now because now you are gambling.”

Later in the poem, Romeo took up for his mom. Claiming she was the victim of great scrutiny and many unseen challenges over the years, the 33-year-old actor and television personality wrote:

“My mother was broken for years publicly and still from the concrete she rose. If people really knew your truth, you’d be strong like mama too … Regardless of the damage, just look deep, because behind every great king there was a queen that carried on his curses that was never seen … I’ve tried and tried behind the walls that hide, but maybe social media is the only way to open up this giant’s eyes.”

You can read the full poem (below):

Of course, the poem is subtle, as it doesn’t call out Master P by name. But the subtext is certainly there. Still, nobody was prepared for what was going to happen over the next few hours on Sunday evening!!

Once Master P caught wind of his son’s IG call-out, the 52-year-old rap mogul didn’t hesitate to clap back. In a comment posted to Instagram in response, the Make Em Say Uhh rapper wrote that social media was NOT the place to address family problems and private concerns:

“The new generation of kids need to stop blaming their parents for everything. Social media is not the place for healing. Son, I love you. Stop trying to get people to feel sorry for you. And let’s come up with a solution. You can come talk to your father and your family like a man. You have kids too.”

In another follow-up comment, Master P continued, claiming he “wouldn’t wish this on no parent.” The No Limit Records founder and executive tagged his son and added:

“I wouldn’t wish this on no parent, especially when you try to do everything you can for your kids. @romeomiller What’s the plan? You are either part of the problem or the solution. I love you and the door is always open for you but I won’t tolerate disrespect. I havent talked to you or seen you in months. God knows I’ve tried to do my best.”

In response, Romeo then claimed his father was “gaslighting” him and added:

“I truly believe my pops did the best he could from his understanding, but he’s painted a picture of perfection and success that has caused more harm than good. I have no other choice but to speak my truth.”

From there, the back-and-forth got even more heated.

Romeo accused his father of editing and deleting post captions and comments amid their argument. Romeo also claimed he has tried to talk to his father in person, but is always deflected away from any resolution:

“Dad, please stop reading the comments and editing your caption. I pulled up to the crib time and time after that and you deflect. I’ve texted you countless times and you reply and deflect. Social media is the only way you communicate. Now you wanna talk. Anything to protect that image.”

Oof. That last line had to hurt.

Next, Romeo started to reply to fans who commented on his poem. In one response, the My Girlfriend rapper claimed “all” of his siblings are broke, and none ever had money to afford college even as their famous father made it seem like the family was riding high for years:

“All my siblings are broke bro. Never even had money to afford college. And nothing is wrong with that, he just shouldn’t paint a certain life that isn’t real.”

Replying to another user, Romeo added that he and his family have been living “month-to-month” for the last 15 years, and his father’s high-flying ways are a “mirage” for social media:

Then, in a third comment, Romeo dropped the bomb. He claimed he has been taking care of his father, and all his Lil Romeo rap money from decades ago “went to pay off his IRS taxes,” leaving nothing more for the younger man or his siblings:

“I been taking care of my pops, bro. Never touched no Lil Romeo money. [It] all went to pay off his IRS taxes. I’ve been more than loyal. The truth will set us all free.”

After those comments, Master P was finally fully clued in on what was going on. The longtime rap exec and former NBA star wrote back that he initially believed Romeo’s poem and follow-up comments were about the deaths of Stephen ‘tWitch’ Boss and Romeo’s sister, Tytyana Miller, who died of a fentanyl overdose back in late May.

Master P commented about how he was shocked to hear Romeo was instead complaining about money. He also insinuated his son was using him like “an ATM for this family” and looking for more:

“I thought this was about DJ Twitch and about my daughter’s death. This is heartbreaking. You just exposed that this is really about money … You started this social media rant … I get it, I’m just an ATM for this family. I don’t care about an image. … I’m going to keep working, keep praying and letting God guide me. Mental illness is real.”

Things died down after that — uhh, for a while.

Later, Master P returned to Instagram to explain some of his thoughts on the ugly family fracas playing out on a public forum. In a video on Sunday evening, the New Orleans native said:

“I love my family, my door is always open for my son. And if I’m wrong, forgive me. I’m apologizing to you if I’m wrong. I’m still a work-in-progress, I come from nothing. Everybody go through trauma. I’m dealing with this right now. But I love going out into the community and helping people. That’s the way I heal. Allow me to heal. I don’t have to be sitting around moaning and crying. I can’t get my daughter back. But I can go out there and keep her legacy going.”

“So let’s do this in love, let’s do this in peace. Think about it. We stronger together. But you older now, so you got to lead by example for the rest of the kids and we’ll get through this. I’m just telling y’all, keep y’all prayers, we need it. And God gonna do what he gotta do.”

Damn! And that was that on the feud. For now…

Still, this whole thing got so ugly, SO fast! Sounds like some serious tax troubles, and much more. Yeesh!!

Of course, it’s been a challenging time for the whole Miller family following Tytyana’s death in late May. This stuff doesn’t compare to an awful tragedy like that. But seeing father and son go at it on Instagram isn’t good, either.