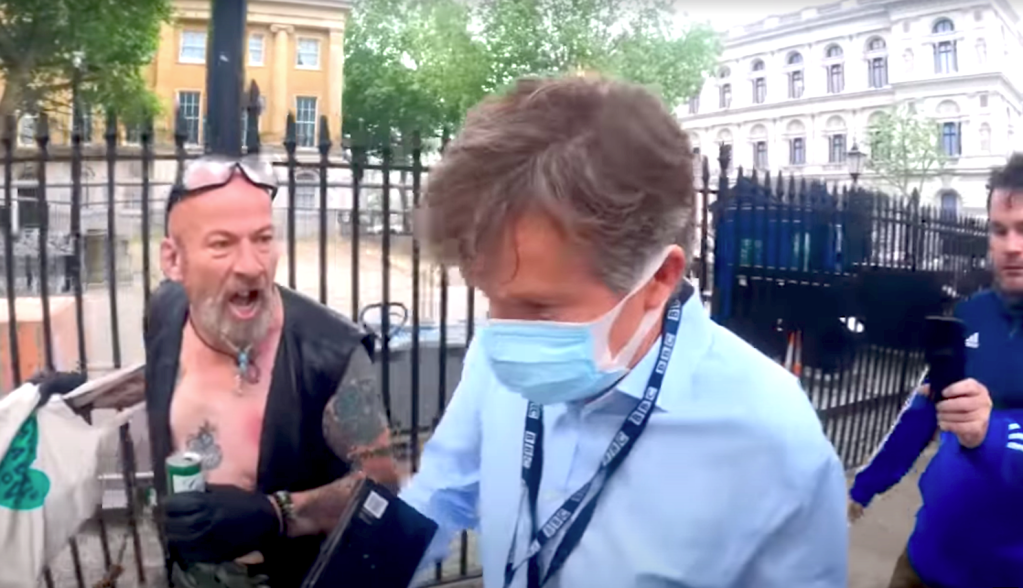 BBC reporter Nicholas Watt appears to have been hounded through the streets of London by a group of anti-lockdown protestors, in an incident that has been widely condemned by senior British journalists and lawmakers.

In the video, which is watermarked with the logo of YouTube channel Resistance GB, Watt is pursued by the protestors, some of whom shout “traitor” and “scum” in his face. The incident appears to have taken place outside Downing Street, Westminster, with police officers watching on.

The full three-minute video is on the Resistance GB YouTube channel. It shows Watt, the political editor of BBC current affairs show Newsnight, walking through the crowd before he is confronted. The situation quickly escalates as Watt is targeted by the protesters and he runs to the safety of Downing Street.

A 45-second clip is being widely shared on Twitter, with Watt’s colleagues lining up to express their solidarity.

“Harassing and intimidating any journalist is completely unacceptable. All journalists should be able to do their work without impediment or risking their safety,” tweeted Newsnight editor Esme Wren. A BBC News spokeswoman endorsed Wren’s words when contacted by Deadline.

Harassing and intimidating any journalist is completely unacceptable. All journalists should be able to do their work without impediment or risking their safety #newsnight

Protesters opposing restrictions – many inspired by online conspiracies about the pandemic and vaccines – harassing the brilliant Nick Watt.

Horrible scenes – and evidence of how online threats are spilling offline.

Disgraceful treatment of @BBCNewsnight Nick Watt. A fine reporter and good friend. Subjected to the intimidation and thuggery of the mob. Simply terrible. Solidarity with Nick. https://t.co/rEjooI9IvV

The video of Nick Watt being chased and abused by a mob is absolutely horrifying – am torn about RTing it as it’s upsetting and I don’t know how Nick feels about it, but huge solidarity with him. It’s disgusting, he’s doing his job. I know the BBC will be rightly furious about it

Serious questions for the police here who stood by and did nothing while a mob of nutters intimidated and shoved a journalist. Solidarity with @nicholaswatt pic.twitter.com/ubHK9R7Nuq

Culture minister John Whittingdale tweeted that the intimidation of Watt was “totally unacceptable,” while Labour MP David Lammy added: “Absolutely horrific. Solidarity with Nick Watt. It is a fundamental principle of any democracy that journalists are free to do their jobs without intimidation.”

The anti-lockdown protest follows UK Prime Minister Boris Johnson delaying by a month the lifting of lockdown restrictions in England. Speaking yesterday, he said the delayed unlocking would “save many thousands of lives by vaccinating millions more people.”